It’s that time again, folks. The August 2016 Horror Block has made its way from wherever the hell it is these things come from (Some say Kansas, others say Canada) all the way to the doorstep of my Haunted Apartment In North Texas. This Block actually found its way to me a bit earlier this go around, though it still arrived in the first week of the month following its name, but hey, I got my Horror Block, I’m good. Without too much ado, let’s dig into this thing shall we? 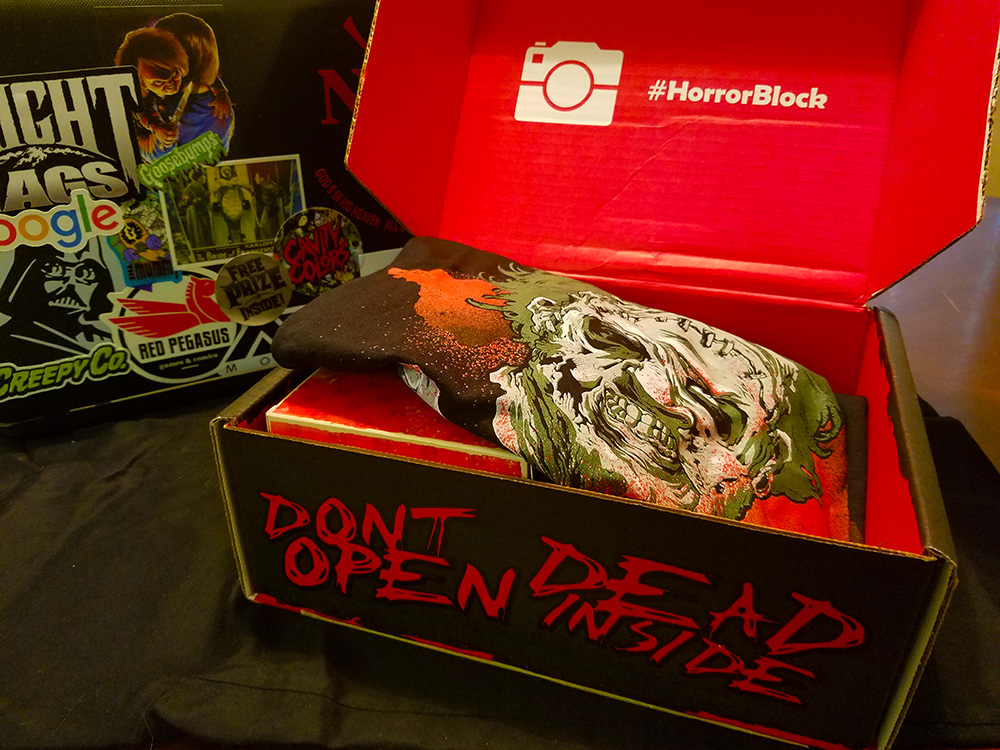 The block is open. Do you dare learn what’s inside? Keep reading.

Cracking open the box I’m greeted by the horrible visage of a fellow Texan: Leatherface from The Texas Chain Saw Massacre. I know a lot of folks on Twitter seem a bit turned off by this shirt as it’s pretty grisly, but at the same time, well, it’s a horror shirt. Some of ’em are gonna be pretty gnarly. As per always, every Horror Block includes a t-shirt from Shirt Punch, this month’s includes Leatherface. Let’s take a closer look. 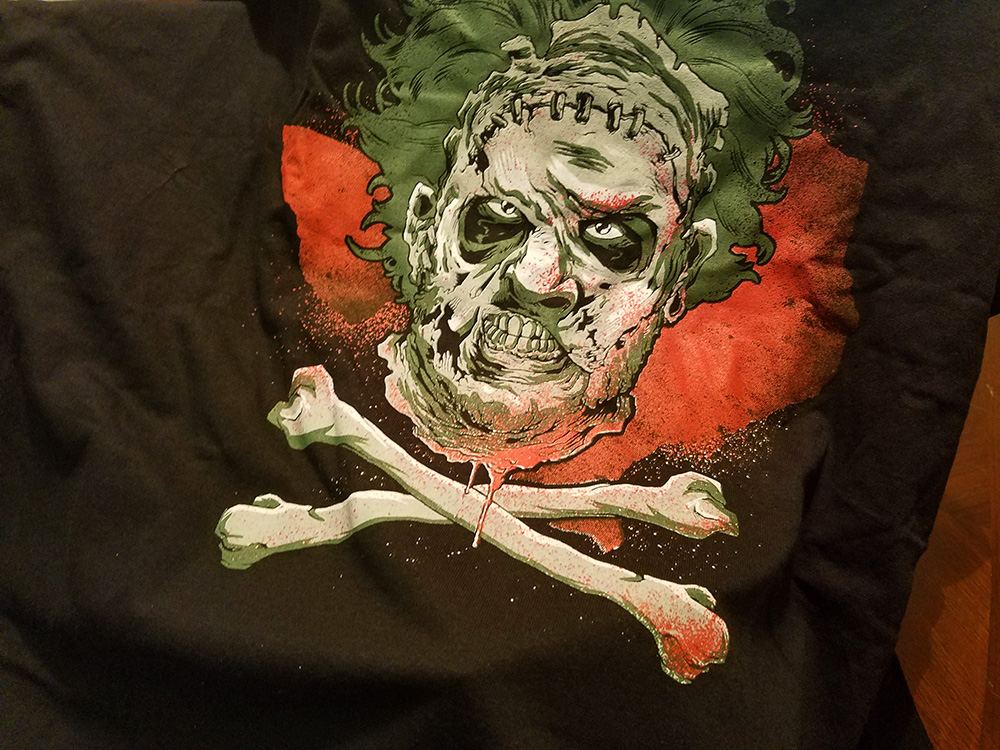 Leatherface is slightly less nice than most Texans I know.

Unfurled in all its gory glory, the Shirt Of The Month: Leatherface. I will admit this shirt is a touch gory compared to the horror shirts I normally rock, but I took this one for a spin the day after getting it and received a fair amount of compliments from scary dudes with beards. That’s generally how I judge a horror shirts success, frankly. If you look behind Leatherface you’ll see a pool of blood in the shape of Texas, which is a nice touch. Below his…leathery…face you’ll see some bloody bones, presumably from a recent meal. Gnarly stuff. I like that Horror Block seems to keep mixing it up as far as what kind of shirts they’re sending out. In the first month I was subscribed, I received the subdued and subtle Jaws shirt, and the second month I was subscribed I got a classy-for-a-horror-shirt Psycho shirt. It was about time I got something a little naughty. 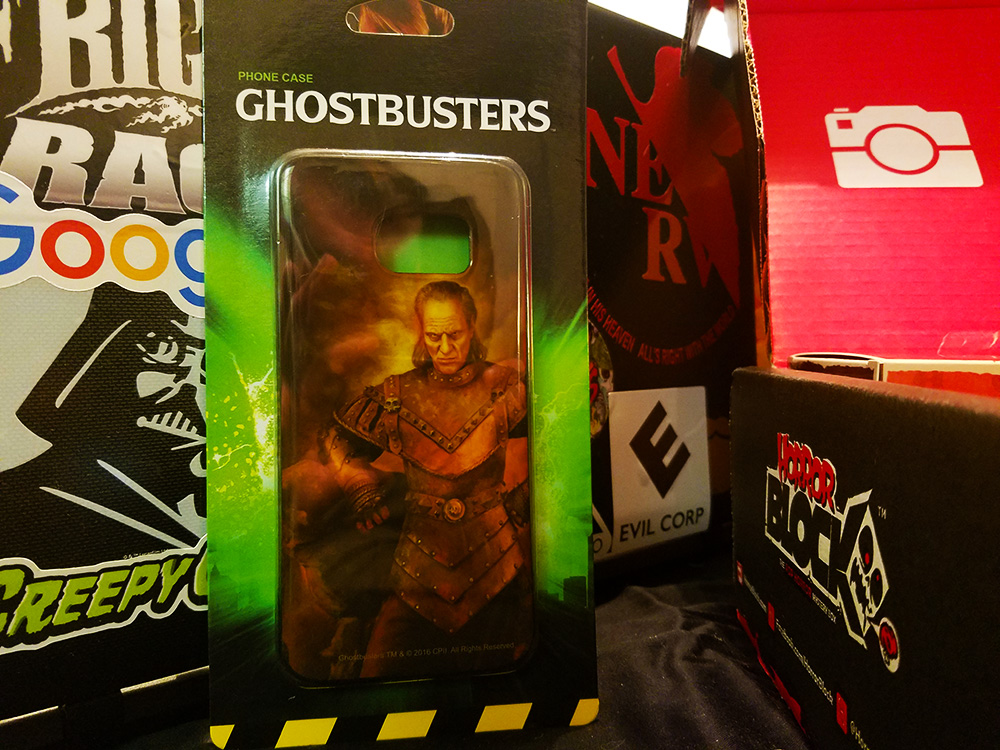 Up next is the most useful thing I’ve ever received in a Horror Block, a Galaxy S7 Edge phone case featuring the infamous painting of Vigo the Carpathian as seen in Ghostbusters II. If you’ve spent any time following me online or reading this blog, you’re probably aware that I am a huge Ghostbusters fan. It’s probably the thing I’ve written about most on this site in all honesty, and I knew there’d be some type of Ghostbusters goodie in this month’s block but I was worried that it was going to be something I A) Already had or B) would think was tacky. I’m a big Ghostbusters mark but I’m also super picky about just about everything, so this was a nice surprise. I slapped this case on my phone immediately after I got it and it hasn’t come off yet.

The case has a good feel in your hand and I was super impressed that they even made them for my phone. I’ve never even seen an S7 Edge case in a store, yet alone one I liked so this was neat. Bravo on this one, Horror Block. I do know via Wonderful Person On The Internet, Edie, aka JerseyOriginal on Twitter that if they didn’t have your phone case in stock that you got a phone screen wipe which is also cool, though admittedly not as cool as a phone case.

Next up we get into controversial territory… 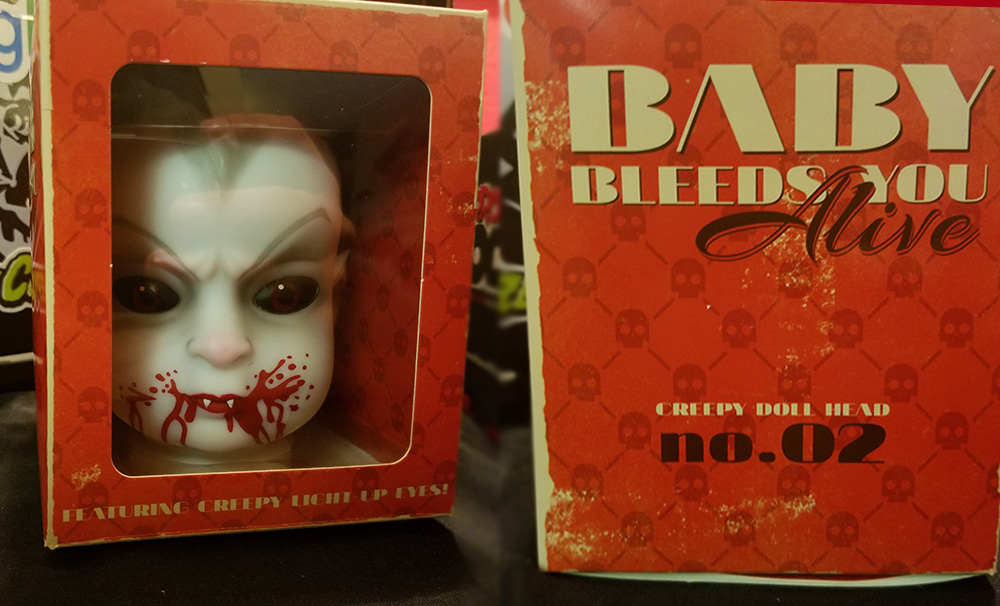 A lot of folks online seem to hate some of the Horror Block exclusives that aren’t pinned to a specific horror franchise. I can see their point, but simultaneously I’m not one to look a disembodied vampire baby doll head with glowing eyes in the face and cry foul. This thing is 100% on brand. Goofy, spooky fun.

As you can see, Baby Bleeds You Alive is amazing. You’re entitled to your opinion if you disagree but this thing is going to live on my mantle every Halloween from here until my family end up having to pry its creepy glowing head out of my cold dead hands. I love you, Baby Bleeds You Alive. I love you so much. That said I can totally understand somebody not being all that impressed by it. I’ve got a spooky Halloween house all year long so this’ll have a spot here but I can respect somebody else thinking it’s weak tea. 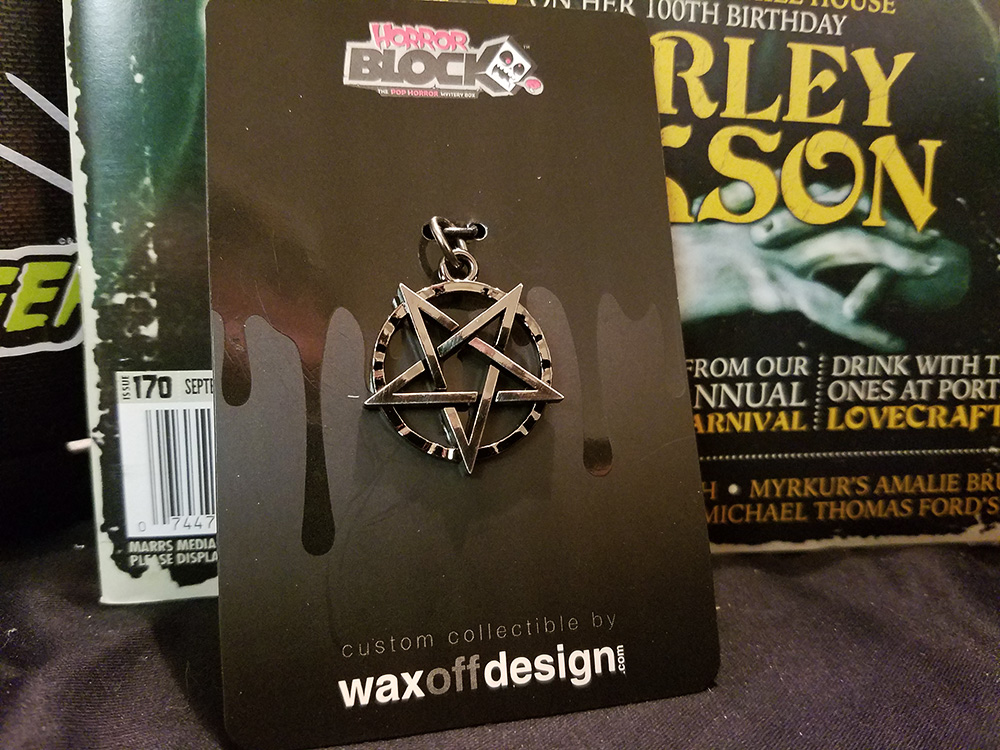 Now this is pretty neat in my book. Horror Block partnered with Wax Off Design to bring us a shiny, shiny pentagram pendant. Pentagrams are very divisive, I understand that, but the craftsmanship on this is simply excellent. I went ahead and put my pendant on a rosary chain for maximum mallgoth edginess. I’m sorry. I can’t help it. We were guaranteed a Supernatural item this month and I assumed that this was it, but it wasn’t. We’ll get to that. 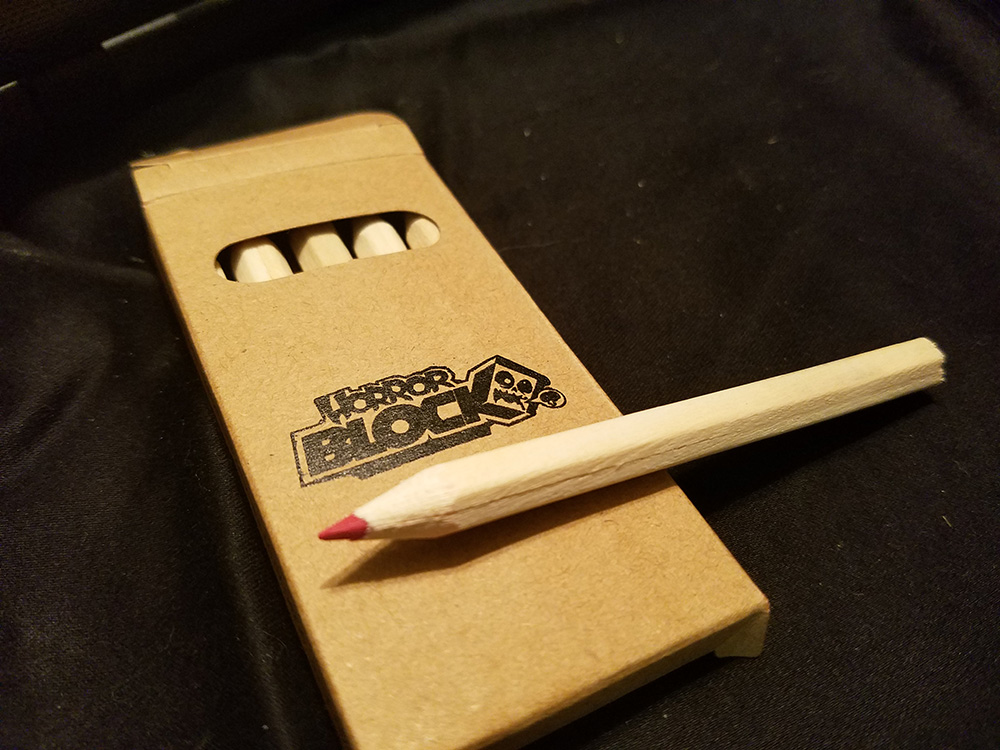 I was a bit taken aback when I pulled these out of the block. Wasn’t expecting that. They seem like nice enough colored pencils. Maybe the next item will help it make sense. 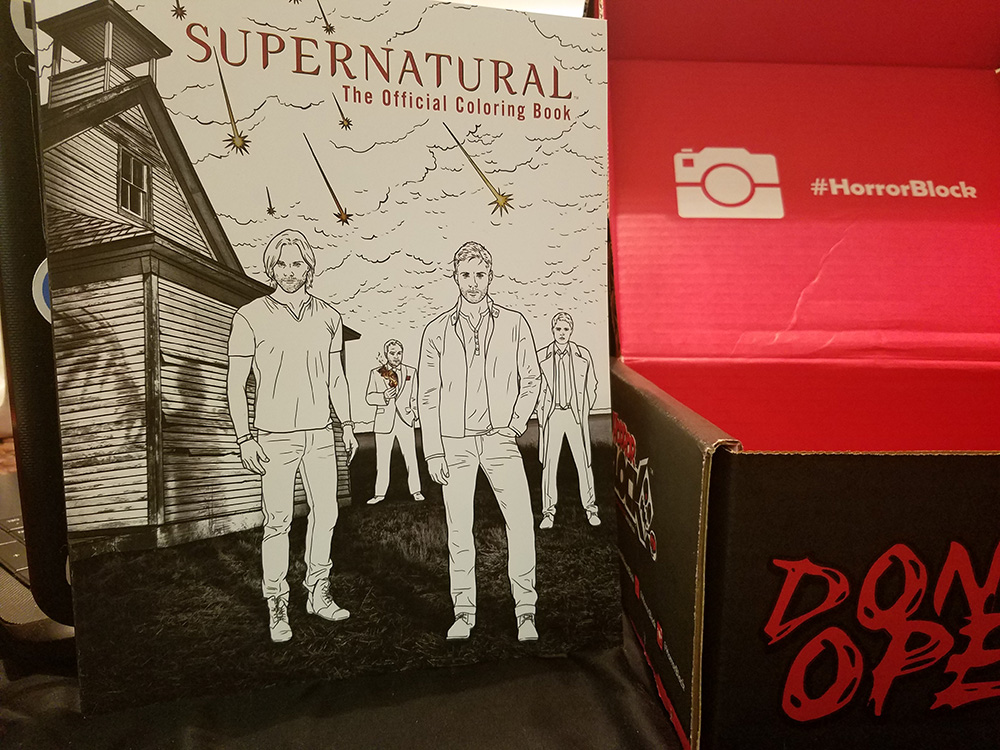 Oh, okay. That does make the colored pencils make a fair bit more sense. Up next is the OFFICIAL SUPERNATURAL COLORING BOOK! 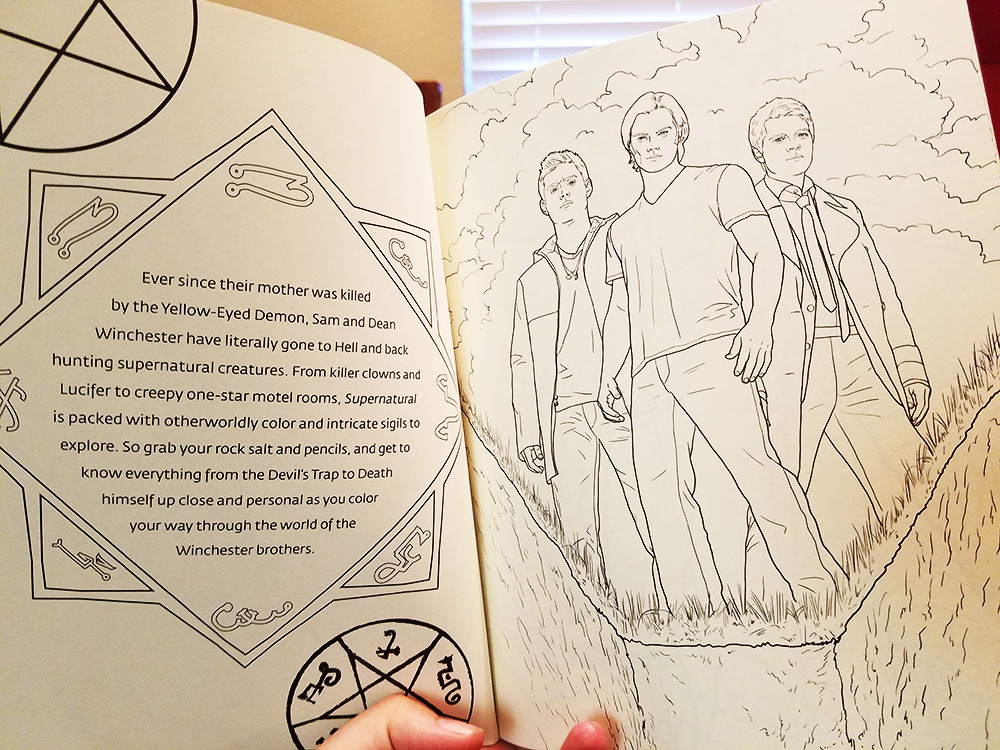 This totally wins the box for me. I’m not the world’s biggest Supernatural fan, but I do like the show. Hell, I  love the early seasons of the show. I tend to wait until a season has ended and then binge watch it nowadays, though. I just watch too many TV shows to keep up with SPN as it airs, but I’ve still got a soft spot for it. The coloring book has quite a few pages and coloring sheets of varying levels of detail / difficulty. 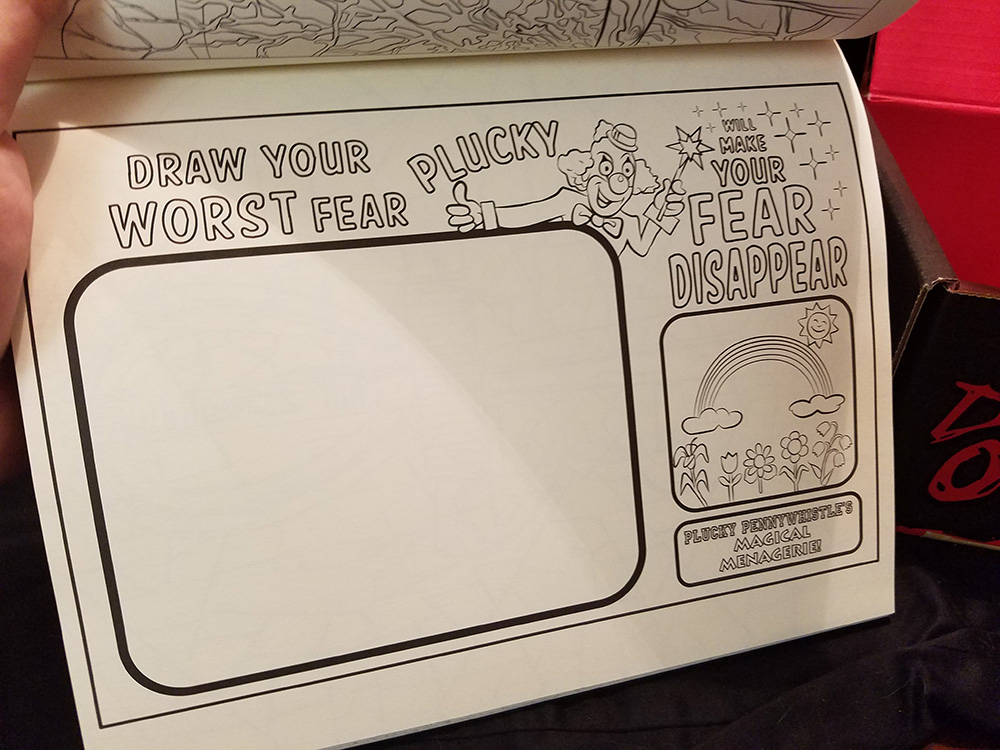 The pages cover a fair amount of the show, ranging from very early stuff to characters from the most recent seasons. It’s also a good mix of intricacies and color pallets. So, as somebody who enjoys coloring to relieve stress every now and again, and a Supernatural fan, this one’s a winner and something I’ll probably get a fair amount of mileage out of. 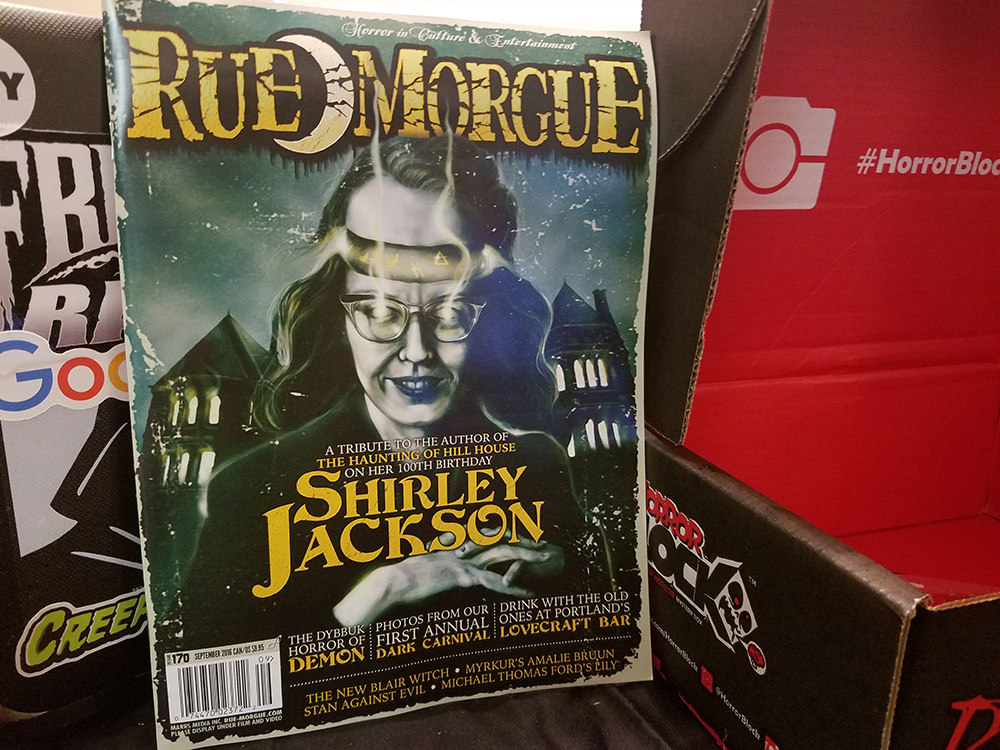 Last but not least is that ol’ standby, the latest issue of Rue Morgue. This month has a cover story celebrating Shirley Jackson, author of The Haunting of Hill House, and advertises coverage of Rue Morgue’s First Annual Dark Carnival, a tour of the Lovecraft Bar, and new Blair Witch coverage. I’m a huge Rue Morgue fan and I love that it’s included every month. Given Rue Morgue’s cover price of $10 bucks, and the fact that I was already buying it every month before signing up for Horror Block, my pocketbook basically ended up getting hit for $10 bucks plus shipping to get all the horror goodies I get each month. As always this block also included a $10 credit for ShirtPunch. 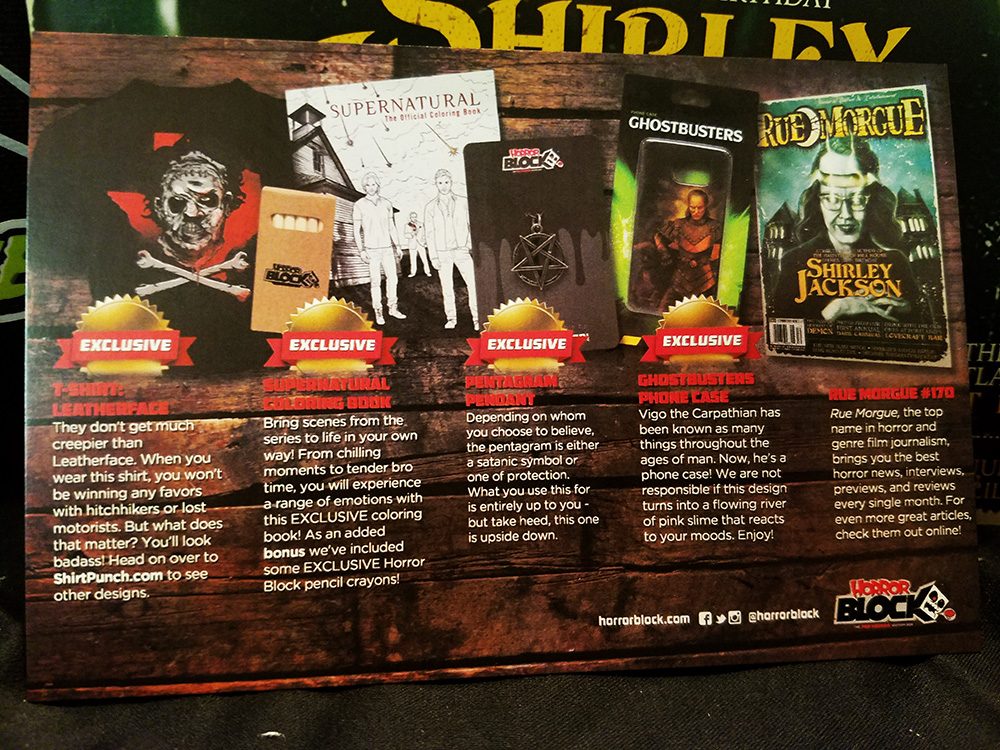 All in all I once again have enjoyed my Horror Block. Admittedly their shipping still has some kinks to be worked out, but I’ve always gotten my box around the same time and have thus far enjoyed each of them quite a bit. That said, next month’s is going to probably be my all-time favorite. Next month every item will be themed around my favorite writer of all time, Stephen King. It also guarantees exclusive items from The Shining and from IT. Beep beep, Horror Block.