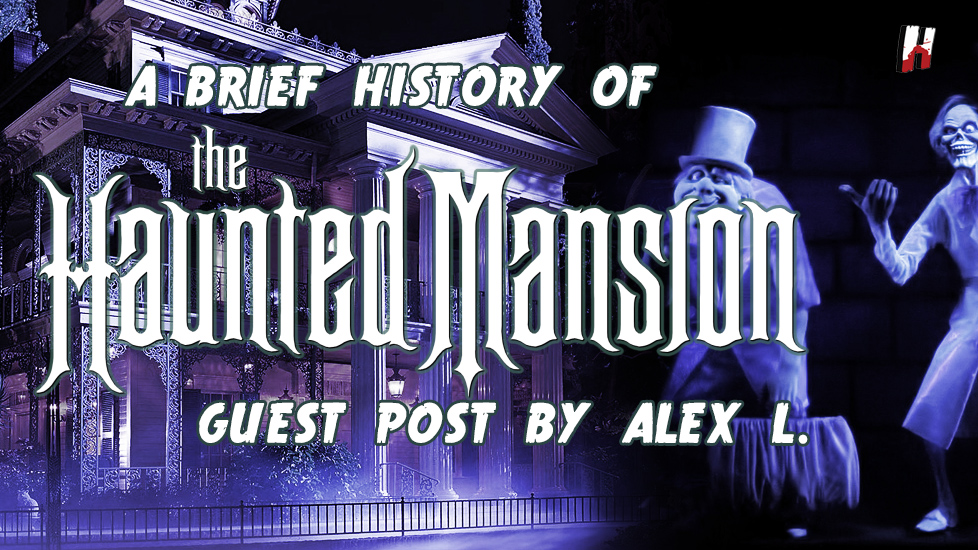 Happy Halloween, folks! The next Humanstein guest post comes from Alex L, aka itsstillalex on Twitter. Hop in your Doom Buggy and strap in as Alex takes you on a whirlwind backstage tour of The Haunted Mansion, its history, and what makes it so darn spooky and fun.

It is difficult to consider Disney in anything other than its squeaky-clean family image, and understandably so. Walt Disney and various successors very deviously and deliberately cultivated an image that has fashioned it into the giant of animation, film, television, theme parks, orange juice, etc. that it is today and will probably be for the next however many centuries. It’s an image that is synonymous with the bright happiness that’s present on the faces of rodent everyman Mickey Mouse and his gang of anthropomorphic pals.
But Disney has also always had a dark side to it. Something that embraces the fun and joy and exhilaration that fear can bring us, whether its the banshee of “Darby O’Gill and the Little People” or the threatening Headless Horseman of “The Adventures of Ichabod and Mr. Toad,” the Walt Disney Company, for all their love of the positive energy and happy endings that their canon provides, have never shied away from what makes the scary things in life scary. Even in Walt’s shining “happy place” in Anaheim, where all are welcome, the home of It’s a Small World, the Happiest Cruise That’s Ever Sailed, there sits alone and lonely Antebellum manor, seemingly long since abandoned, where the only happiness found exists in the ghoulies and spirits who are dying to have you in their swinging wake. 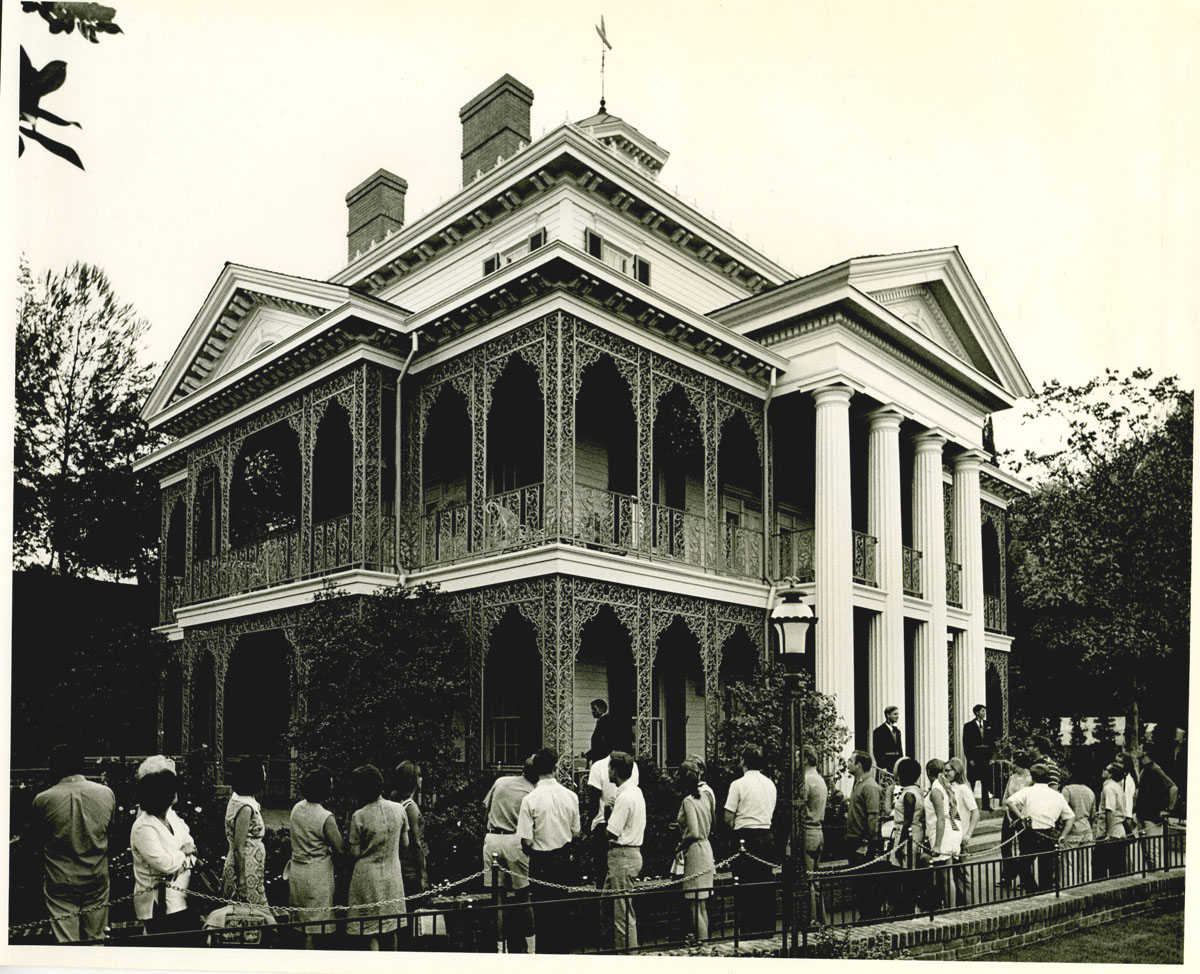 The Haunted Mansion at Disneyland in 1969

While the Haunted Mansion opened in 1969, a full 14 years after Disneyland’s opening, plans for a haunted house attraction came about before the park was even past the conceptual stage. The original designs for what was originally simply called “Mickey Mouse Park” featured a few notable areas including a turn-of-the-century main street (which would become Main Street USA, naturally), a town in the Wild West (Frontierland) and even a carnival (which presumably evolved into part of Fantasyland’s medieval circus designs). Taking this blueprint to heart, Imagineer (Disney’s fancy word for theme park engineers and idea men) Harper Goff added a worn and uneven side street near a church and graveyard that lead to a decrepit manor sitting high atop a hill, looming ominously over Main Street. Disney, loving the idea, assigned fellow Imagineer Ken Anderson to give more life to the idea, which Anderson ran with, creating detailed stories for the history of the home and its deceased tenants, which he crafted inside a beautifully decaying home covered in plant life and boarded up.
The plans for it to tower over Main Street were soon replaced with it sitting peacefully off to the side in the newly-planned New Orleans Square, whose tight streets and wrought iron architecture proved a better fit for an old American mansion. Plans for the area included a number of oddly dark and un-Disney attractions, including a thieves market, a wax pirate museum (which eventually became Pirates of the Caribbean) and the Haunted Mansion, a haunted house walk-through. And while Walt Disney loved the concept, he hated the idea that a run-down home would sit among the rest of a park he planned as so pristine that he watched and calculated how long people would walk before throwing things away so there would always be trash cans within a guest’s distance. 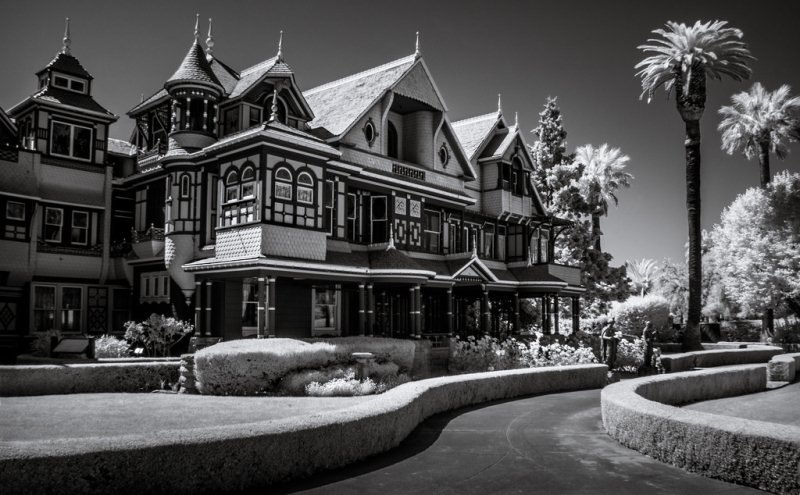 But Disney, despite his image, was truly fascinated by things that existed on the outskirts of the normal. His visit to the infamous Winchester House in San Jose, a home whose intricacies and intentionally needlessly complex layout were born of a woman’s fear of the ghosts haunting her home, became the new design inspiration for the Mansion. Something that was effectively creepy but easily discernible from every other haunted house ride. Additionally, Disney assigned a number of Imagineers to help both flesh out and simplify Ken Anderson’s plans, most notably Marc Davis, Xavier Atencio, Rolly Crump, and Yale Gracey.
Davis, one of the studio’s famed Nine Old Men of core animators, served as lead character designer (as he had and would with other famed Disney Parks attraction animatronics), creating practically every famous ghost you see in the ride, as well as the mind behind the portraits in the stretching room, where posh paintings slowly pull down and warp into darkly comedic images of imminent demise (Davis also designed the mansion’s poor groundskeeper, the only living soul to be found).
Atencio had in the past written scripts for Adventures Thru Inner Space, a story where the guest follows along as they’re shrunk smaller and smaller while a scientist details his own introspective and existentialist journey through microscopic discovery, and Pirates of the Caribbean, an attraction that somehow subtly tells a story in reverse of pirates destroying a town to find a cursed treasure and dying in the process. In many ways, his ability to craft a complex story while still maintaining a sense of fun was a perfect match for a haunted house that sought to be different. In addition, he happened to pen the lyrics to both Pirates’ theme “Yo Ho (A Pirate’s Life For Me)” and the Haunted Mansion’s theme song “Grim Grinning Ghosts”, a song that is heard continually in unnerving variations throughout the ride.
Crump and Gracey (the namesake for the mansion’s long dead owner), meanwhile, were responsible for the effects and props. The ballroom scene, where tens of ghosts celebrate with birthday parties, dancing, and duels while fading in and out as guests watch from the mezzanine was conceived by the two with the Pepper’s Ghost effect, employed by placing the actual animatronics in a room on the other side behind the ballroom, being projected into the room itself. Crump and Gracey also brought about the idea of countless creepy ephemera to decorate the manor, something that Disney adored to the point of wanting to make an unrealized Robert Ripley-esque “Museum of the Weird” restaurant to serve as a companion to the Haunted Mansion that would show off all of their designs brought to life.
Yet, while those four are the primary fathers of the modern version of the attraction, there’s still one other important presence behind the scenes that can’t be left out. Perfectly-named Imagineer Leota Toombs was asked by Yale Gracey to test out the visual effect of a ghostly medium, her disembodied head floating within her own crystal ball, and the image stuck, although Madame Leota would be voiced by the more threatening-sounding actress Eleanor Audley (who portrayed both the evil stepmother and Maleficent in Cinderella and Sleeping Beauty, respectively). Toombs was granted a better outlet for her smaller voice as Little Madame Leota, the tiny bride perched atop the ledge in the final room before guests exit (This though is also leaving out the other major voice acting presence, long-time Disney/Jay Ward/Rankin-Bass staple Paul Frees, who plays your omnipresent, pun-laden Ghost Host). 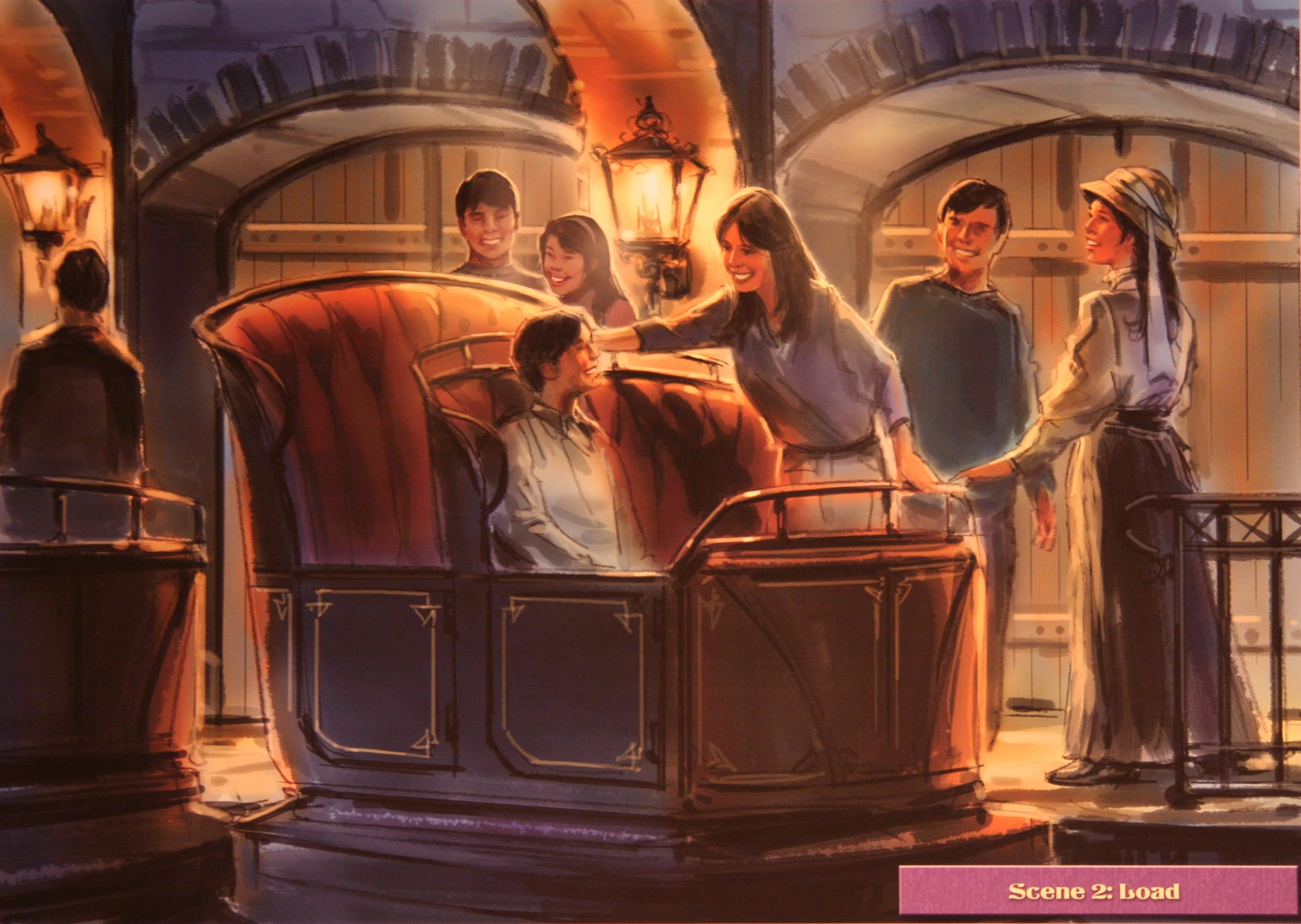 One would think that all these cooks, however brilliant they may be, the broth had the possibility of easily being spoiled or, at the very least, muddled to the point of confusion, and you would be…right. There’s a reason it took at least 15 years and Walt Disney’s death to complete it. For one, there was the concern that it would be hard to make a walk-through attraction when foot traffic would have to be in low capacity which is something a Disneyland attraction couldn’t afford to have. This was eventually solved with the creation of the Omnimover system for Adventures Thru Inner Space. With this invention, guests could board and disembark continuously moving vehicles and gifted attractions a greater scope to the story it could tell by controlling how these vehicles (dubbed “Doom Buggies” in the Haunted Mansion) rotated and what the riders could see and hear.
The other major issue was how the attraction should feel, especially in the wake of Walt Disney’s death. The sudden passing of the company’s founder created a tumultuous effect among those working on future projects over how to proceed, and the Haunted Mansion was no different.  Some Imagineers, led by background designer Claude Coats, wanted something darker, a mansion of gloomy hallways full of doors that eerily kept knocking. Others, led by Marc Davis, wanted something lighter, where comical ghosts performed macabre gags. It was Xavier Atencio, though, who managed to combine the two sides, suggesting something in between: a undoubtedly dark and spooky ride that would slowly ease the tension into a finale of a graveyard party and gently smiling hitchhiking ghosts. It was an awkward idea, yes, but one that worked against the impossible odds. 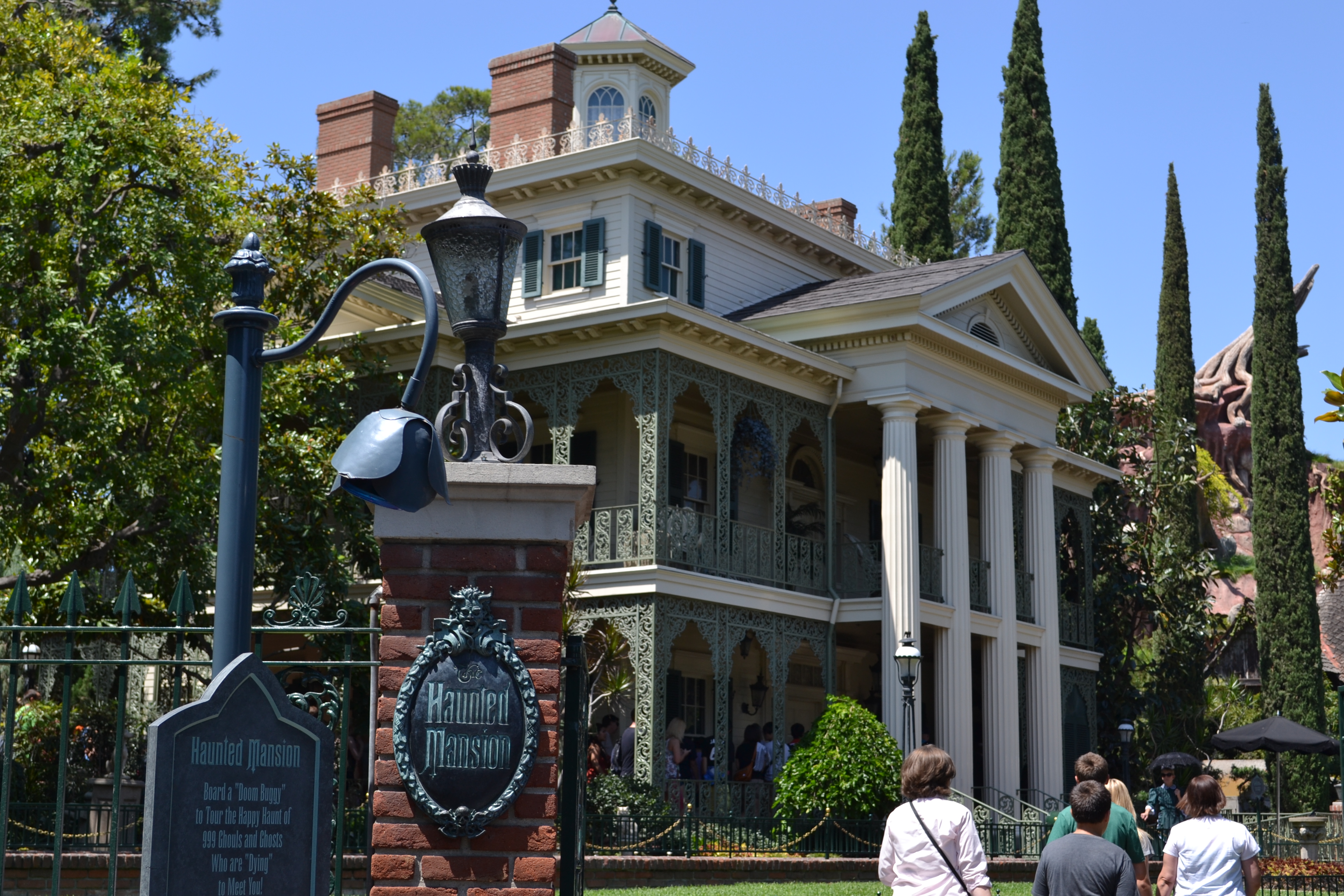 With countless renovations and siblings in other Disney Parks (including the old west Frontierland Phantom Manor in Disneyland Paris and the 18th century New England mansion overlooking Liberty Square in the Magic Kingdom), the Haunted Mansion has survived mostly untouched for 47 years. Even during renovations, those cleaning and fixing up are strongly advised not to touch up cobwebs or certain dusty areas. It somehow still stands strong as an attraction that defines what Disneyland set out to do: a theme park designed to separate it from other amusement parks, one that simultaneously recalls and succeeds them in ways that allow both adults and children to have fun.
While Walt Disney never saw it completed, he always said that Disneyland would never be finished, a park that was constantly evolving and improving. Despite the mostly minor cosmetic changes, an annual Nightmare Before Christmas-themed holiday redesign and the revival of one long-missing Hatbox Ghost, the Haunted Mansion has somehow defied Walt’s words, remaining as the same home of 999 happy haunts looking for their thousandth addition. Any volunteers?
Tweet

Alex really likes Disney and really likes horror and that's pretty much all he likes. You can find him on Twitter at @itsstillalex and you can find more of his writing on http://listdepot.tumblr.com