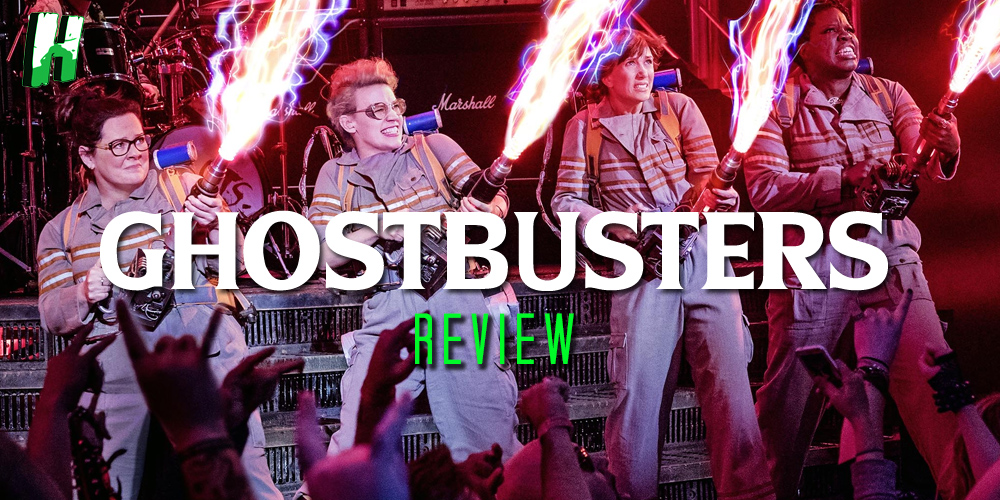 The early 90s (my childhood) was chock full of pop cultural phenomena like Jurassic Park, The Mighty Morphing Power Rangers and of course, The Teenage Mutant Ninja Turtles but quietly present in the background there was always Ghostbusters.

Though both Ghostbusters films were released before I was even a glimmer in Mama Humanstein’s eyes, I really like Ghostbusters and always have. I grew up on the original films, which always seemed to be airing after the Saturday morning cartoons on The WB Network. I watched reruns of The Real Ghostbusters on the USA Network, and had my fair share of Ecto Cooler juice boxes. I even watched the unfortunately short-lived Extreme Ghostbusters and pretended my parents ShopVac was a proton pack. What I’m getting at here is that I really dig Ghostbusters.

This summer has been the summer of Ghostbusters for a lot of folks. There have been new Ghostbusters toys, more cool t-shirts than you can shake a stick at, the original Ghostbusters all over TV and even the return of Hi-C Ecto Cooler. This summer has been pretty good to Ghostbusters fans. Well, good to Ghostbusters fans that aren’t manbabies. There’s also been a lot of controversy about this film. A lot of anger, a lot of “ruined childhoods” and a lot of negativity all over the internet. A big chunk of Ghostbusters fans have been fighting the good fight, but the ongoing fight about whether girls can be Ghostbusters has led to some pretty firmly held stances. I’ve been excited for this movie since it was announced, but I had to be careful not to have decided that I love this movie before I’ve seen it. Cautious optimism was the name of the game for me but now that I’ve seen the film I’ve gotta say: I love this movie, though it isn’t perfect.

The film is directed by Paul Feig (Bridesmaids, Spy) and written by Feig and Katie Dippold (Parks and Recreation, The Heat) and their comedic chops definitely shine through the ectoplasm. Set in modern New York, the remake of the 1984 classic follows Erin Gilbert (Kristen Wiig) as a physicist desperate to make tenure at Columbia University who discovers that her former research partner and best friend Abby Yates (Melissa McCarthy) has finally published an embarrassing book the duo wrote back in college. Columbia is very concerned with reputation and Erin (with an E) decides to go see Abby and demand she pull the book down lest Columbia become aware she believes, or believed, in ghosts.

The heart of the film is centered around Erin and Abby’s relationship, the bonding that comes with their belief in the supernatural and the growth of the Ghostbusters. Rounding out the team is Leslie Jones as comedic hurricane Patty Tolan whose character displays more depth and humor than the trailers might lead you to believe, Chris Hemsworth as their gleefully dim secretary, Kevin, and my personal favorite and absolute showstopper Kate McKinnon as Jillian Holtzmann, Abby’s new research partner who happens to be an engineer and a total madwoman.

Speaking of Holtzmann, McKinnon’s character is the breakout star of the film. While Wiig, McCarthy and Jones are funny and by no means comedic slouches, Holtzmann is the star in my heart and in my mind. Her performance is stellar and she steals the scene whenever she’s on screen. She just oozes charisma and her gleeful insanity does wonders for the film. She’s going to be quoted for years.

The film overall matches the general trajectory and high spots of the original film while carefully sidestepping the original plot. The narrative manages to be almost completely different while still hitting the majority of the tonal mainstays of the original. You’ll find no Zuul here nor any forced romantic subplots, but you will find a group of three scientists and a brave lay person going toe to toe with the supernatural to save New York. You’ll also find solid character driven humor, some beautifully stylized special effects work, and a whole lot of fun. That’s what I’m here for. 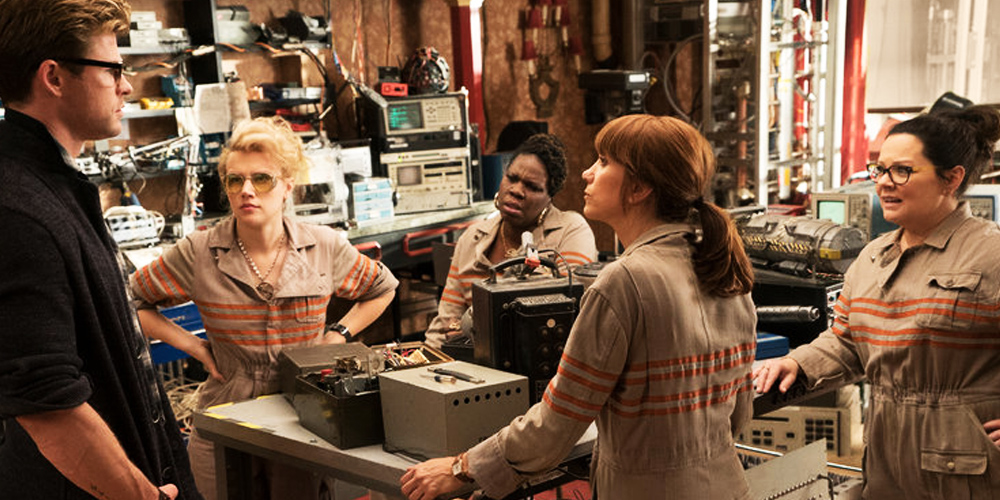 The overall tone of the film is one of nonstop fun. The character-based drama is mostly dealt with early on and emotionally invests the audience in the characters without slowing down the action or the fun in the latter half of the film. The cast is killer when allowed to bounce off of each other and Wiig, McCarthy, Jones and McKinnon are so kinetic and full of joy onscreen that I definitely laughed this much in a theater in a very long time.

A lot of criticism seems to be getting laid at the feet of the ways in which this film feels beholden or put upon by the original film, and to an extent, I would agree. There are perhaps too many cameos from the original cast, though I personally enjoyed the majority of them and felt the only one that stretched on too long was Murray’s. The rest were tiny and inconsequential and didn’t pull me out of the film, though I can see how they might detract from the new story for others.

In addition to all of the above, the film is simply gorgeous. The brightly colored technicolor ghosts are a sight to behold and my jaw was on the floor during much of the third act because of it. The effects work is beautiful and the design aesthetic of these ghosts is amazing. I’m going out and buying all the dang toys now, y’all. They’re fun, bright, and scary. Just like they should be.

I believe that having seen the strength of the original segments in this film and the dynamite chemistry between the cast, the Ghostbusters reboot might have been better served by avoiding more of the original’s beats. The final battle is very reminiscent of the Stay Puft battle in the first film and the scene before that battle here with the women taking on New York City streets overrun with ghosts was more fun and more in line with the world they’d created than the final battle had any chance of being. It at times feels like Feig may not have been allowed to move as far in the directions he wanted, and that may have been a mistake, though at worst it leads us to say “The Ghostbusters remake is too similar to Ghostbusters” and that feels like foolish complaining for the sake of it. 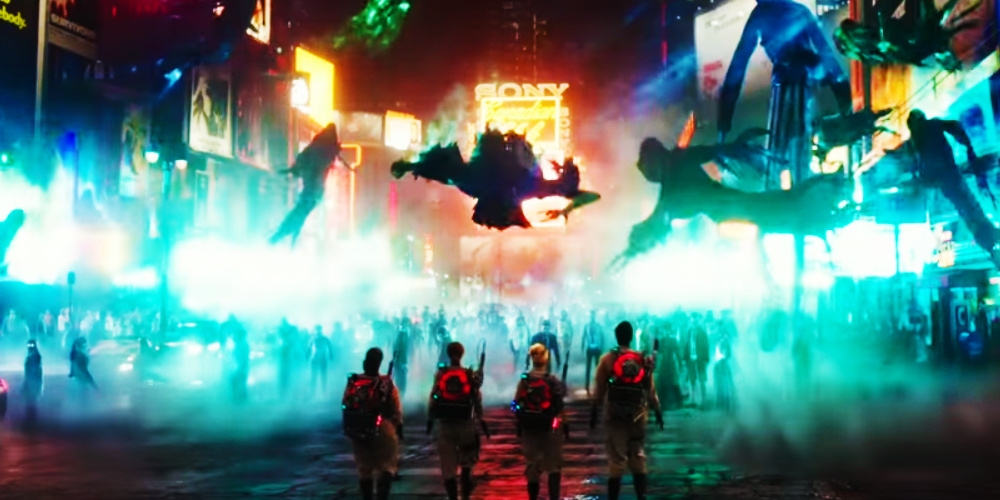 All reboots and remakes beg the question, “How does it compare to the original?” My answer is: well. It compares well. That’s my hard stance. This film is fun, spooky, and chaotic. The characters do not attempt to ape the originals at all, and  are strong enough to stand on their own as worthy Ghostbusters. The tone is a little lighter than the original, the comedy more blatant, and the ghosts scarier, but it stands up with the original. I hesitate to say that I like it as much, as nostalgia probably prevents me from doing that, but the film does everything we could have possibly expected it to and does it with style and humor that are distinctly its own.

If you are on the fence about seeing Ghostbusters, go see it. It’s a laugh out loud summer comedy with enough spooky fun to keep you on your toes, it’s packed with great characters, and the film is a visual feast. Ghostbusters is very much worth your time, even if it can’t completely break free from the shadow of the original film. This franchise still has legs and I couldn’t be happier to live in a world with Ghostbusters in it. 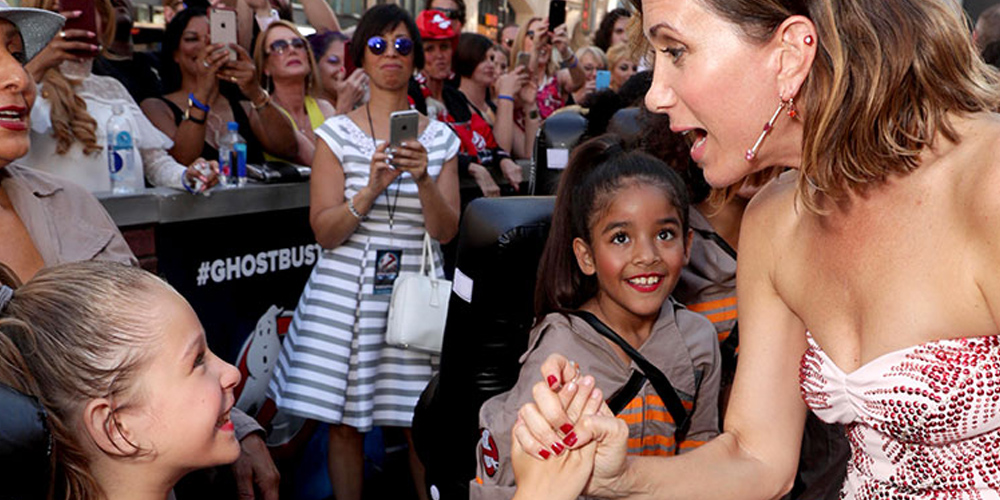 Perhaps even more importantly, if you love Ghostbusters you need to go see this movie. The film is by all means worth seeing, but it’s foolhardy to forget that it somehow got embroiled in a culture war that stands to damn it if folks who would enjoy it don’t go out and see it. Box office projections only have it making 1/3 of its 150 million dollar budget during its opening weekend, and if we don’t support this franchise it will fade off into obscurity and nostalgia. That means those proposed Ghostbusters expanded universe films that were being discussed, that cartoon that’s supposedly in the pipeline, and maybe most importantly, Ecto Cooler lives and dies by how well this film does.  Just some food (or juice) for thought.