If you’ve read my review of Riverdale’s third episode, Body Double, you likely noted that I wasn’t the biggest fan of it. Well, Episode 4, The Last Picture Show, has righted the ship and looks to be steering it into clearer water. Well, clearer for us, the viewers. The events of this episode look to be taking our intrepid and tortured Archie gang into uncharted seas even murkier and more turbulent than Sweet Water River on that fateful July 4th morning. 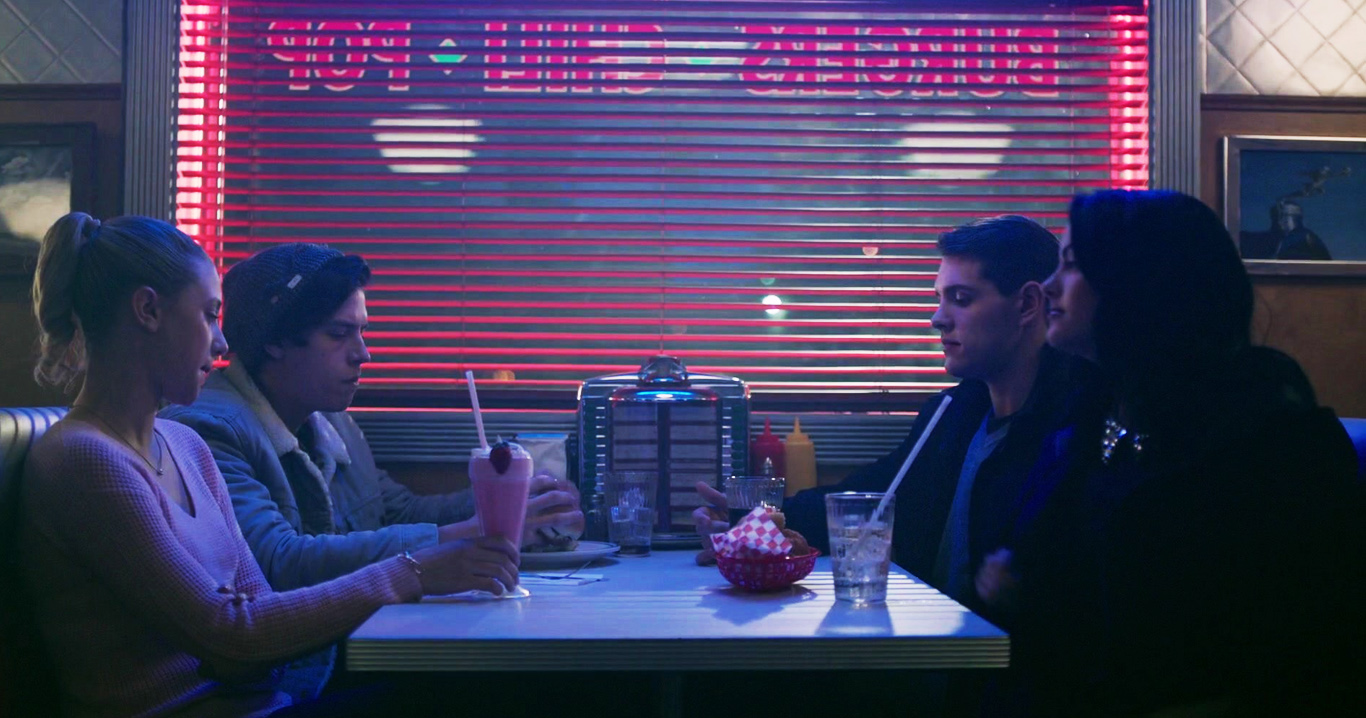 Moving away from the after school special vibe that the previous episode exuded, Riverdale’s 4th episode brings the gang back to ground by focusing on developing the characters, particularly Jughead and Kevin Keller, and while this episode does add quite a few more wrinkles to the mystery that is Riverdale the episode shines because it focuses in on the coming of age aspect of any teen show. For Jughead, that coming of age story is focused on the end of an era, as Jughead fights to save his place of employment, the Twilight Drive-In, from being shut down. Veronica struggles with trusting her mother, Betty struggles with both her feelings and her motivations, and the Archie/Grundy relationship goes in an interesting direction. All the while a criminal element is introduced that quickly rears its head in multiple storylines.

While plot abounds, characters are the name of the game in this episode. Jughead and Kevin are both very well served by this additional screentime, with the Keller household making an appearance together and in the process showing a strong father-son relationship. Kevin’s dad doesn’t care that he’s gay, he just cares that he’s safe. Kevin makes some choices in this episode that are a little less than safe, but they are both sexy and dangerous so they are good fits for Riverdale. We see him hooking up with one of the South Side Serpents (the local biker gang) that’s been terrorizing the drive in. Jughead tries to fight city hall and in the process we learn a little about his family’s tragic backstory. Some of that backstory creates an even deeper web connecting the town, as we learn that Jughead’s father was fired by Archie’s dad for stealing on the job and a few other key grains of character and grit.  Betty and Veronica try to solve the mystery of who exactly Ms. Grundy is, discovering a past identity and a gun and the Archie/Grundy “relationship” comes to its conclusion when outside forces get involved in the form of Betty’s mother coming across the newfound evidence and forcing her to leave town. Veronica’s mom is having shady meetups with another South Side Serpent, played by Skeet Ulrich (

Some of that backstory creates an even deeper web connecting the town, as we learn that Jughead’s father was fired by Archie’s dad for stealing on the job and a few other key grains of character and grit.  Betty and Veronica try to solve the mystery of who exactly Ms. Grundy is, discovering a past identity and a gun and the Archie/Grundy “relationship” comes to its conclusion when outside forces get involved in the form of Betty’s mother coming across the newfound evidence and forcing her to leave town. Veronica’s mom is having shady meetups with another South Side Serpent, played by Skeet Ulrich (Scream), and the question of how much one can trust their parents comes to the forefront. 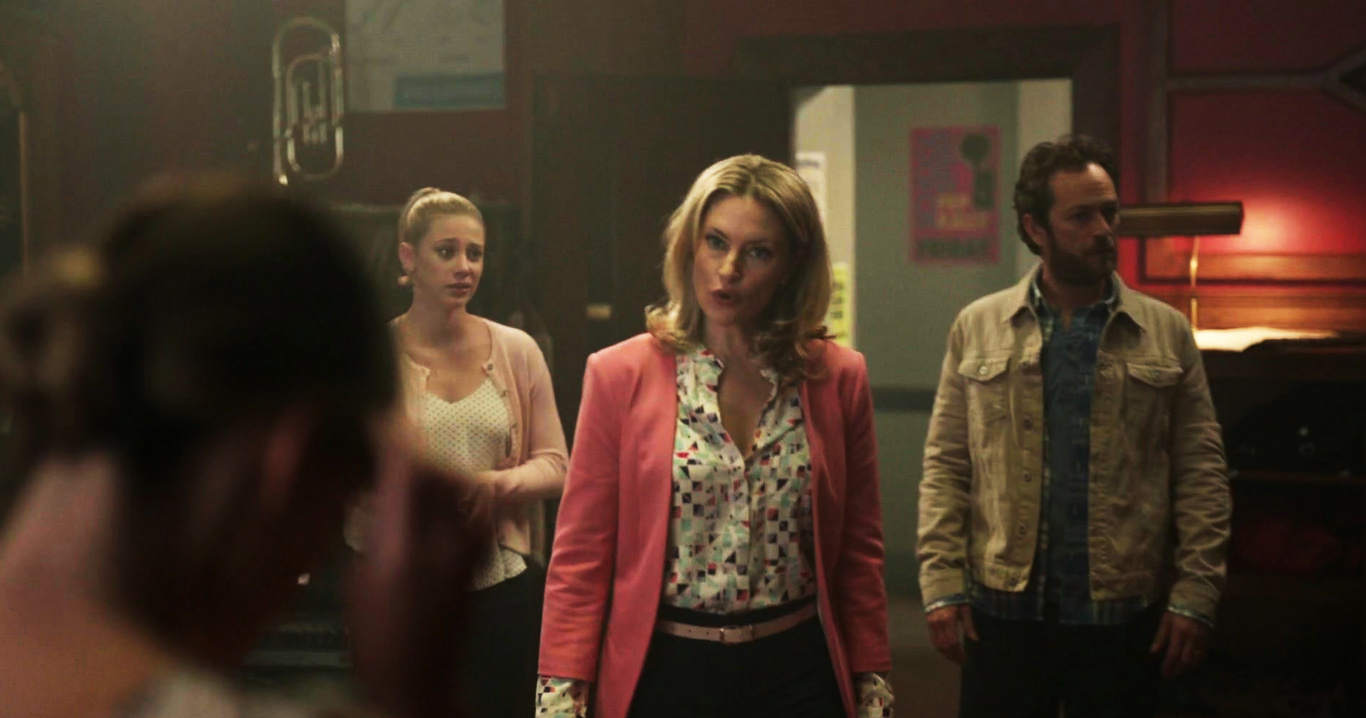 Hermione Lodge’s misadventure reveal that she is not quite the kindly and warm individual we’ve seen thus far, with her involvement in the criminal underworld being much more involved than we might have believed and proof positive that Veronica’s father is, in fact the criminal that he seems to be painted as. Other parents perform equally sordid things, though with a nice peppering of humanity this go around. Alice Cooper who has butted up a little too closely to full blown villain territory for my liking still has Archie in her crosshairs and when she becomes aware of he and Grundy’s relationship, she’s the only one that will come out and say Grundy is a sexual predator.

People continue to make questionable decisions in the fallout of this situation, and in the end Grundy is simply forced to leave town and let go to, presumably, go be a sexual predator somewhere else. with Unfortunately, while the relationship was handled well in this episode I for one am not sad to see this subplot dashed upon the rocks. The relationship has felt so removed from the overall plot, despite behaving as though it were central to it. I am eager to see where Archie goes now that this relationship is seemingly over. Perhaps we’ll get a richer, more fleshed out Archie if he’s not splitting his devotion between his friends and Ms. Grundy. One can hope.

The subplot that worked the best, however, was Jughead’s. Throughout the episode, we gradually learn how thoroughly his family has fallen apart and it is, in the end, revealed that Jughead has in fact been living at the drive-in. Oh, and that Skeet Ulrich’s South Side Serpent character also happens to be Jughead’s father. I am so interested in where this story goes that the week between episodes seems especially grueling this go around.

This episodes shift towards character development and enriching the relationships between the character was a nice shift from the narrative slowdown we experienced last week. The way each of the above issues and developments was handled made for absolutely fantastic television, with tight editing, strong performances across the board and strong scripting that avoided all the preachy pratfalls we saw the show take last go around. Hopefully going forward Riverdale has more “The Last Picture Show” episodes and fewer “Body Double” episodes because this is quite frankly my favorite episode of the show thus far.