Even though I absolutely love horror comedies, I have always been somewhat apprehensive of comedians getting their comedy peanut butter in my horror chocolate. I don’t like spoofs. I don’t like it when people don’t take horror at least somewhat seriously. I worry about horror looking “dumb” to mainstream audiences. I’ve loudly expressed my low expectations for the David Gordon Green / Danny McBride Halloween film in the Blumhouse (the production company behind Get Out) pipeline. I’m here to say I might just be a fucking idiot because famed sketch comedian Jordan Peele’s directorial debut is the smartest horror film I have seen in the last decade.

Get Out is a film that is destined to anger reactionary white people, shock and unnerve your average film goer, and enter the harried pop culture discussion of race immediately. Unlike many films that the general public likes to quote-un-quote elevate above its horror station for “having something to say”, Get Out never has to explicitly spell out that it’s discussing the tense and turbulent nature of race relations in a world of well-dressed white supremacists and All Lives Matter signs. From the John Carpenter steeped cold open onwards, Get Out is equally concerned with being a damn fine horror film as it is with being socially conscious and that balance pays off.

Get Out uses every tool at its disposal to communicate the difficult-to-articulate-until-you’re-faced-with-it terror of white supremacy and the more universally understandable anxiety of being the outsider. It worked damn well. Maintaining that balance between tension and social commentary might be precarious or even impossible in lesser hands even before considering allowing humor to suffuse throughout the film. If Jordan Peele wasn’t Jordan Peele, Get Out may very well have been a film almost guaranteed to never find its footing or a consistent tone. Thankfully, Jordan Peele is, in fact, Jordan Peele and Get Out is excellent.

Following a young black fine art photographer named Chris Washington (Daniel Kaluuya, Black Mirror) and his girlfriend of 4 months, a white college student named Rose Armitage (Allison Williams) as they venture to the meet Rose’s parents. Chris is concerned that Rose hasn’t informed her parents that he’s black, all the while Rose insists it won’t be an issue because they’re liberal people who aren’t racists.

The duo begins their trip out to Rose’s parents home in an affluent rural area and along the way Rose strikes a deer with her car. Chris seems drawn to the rhythmic dying breaths of the deer. Perhaps Chris identifies with the deer. Flighty, nervous almost to the point of paranoia and ready to run, the deer symbolism continues throughout the film including in a dream sequence as well as a key scene in the last leg of the film. There is, to my mind, symbolism inherent in using a deer as a touchstone, possibly in reference to the antiquated racial slur “Black Buck” which referred to a black man who refused to bend to the will of the white authority in reconstructionist America. The slur was frequently applied to black men attracted to white women. Another point to make regarding the deer as an icon is that deer may be flighty, but that is the very trait that keeps them alive. 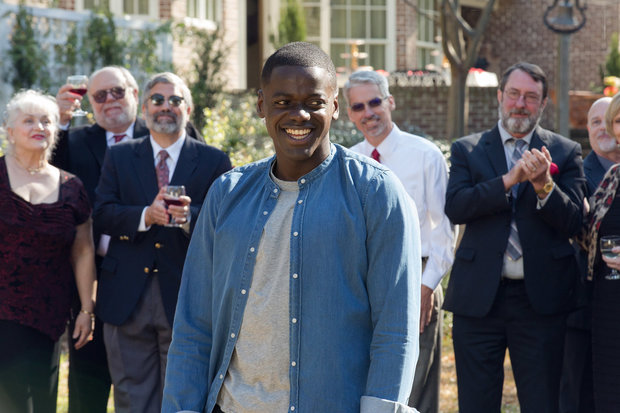 Following this collision Chris and Rose encounter the first depiction of racism in the film when a stubborn state trooper demands to see Chris’s ID despite him not having been behind the wheel. Chris, obviously, has dealt with this for most of his life and this microaggression rolls off his shoulders. Rose takes umbrage and pushes back on that. It’s a small moment but it carries a strong sentiment. Rose has the option of getting mouthy with the police while Chris does not.

Once they arrive at Rose’s parents home, Chris is greeted with open arms and her parents appear to be the put together, slightly out of touch middle aged liberals one might expect them to be. Her father, Dean Armitage (Bradley Whitford, The West Wing) is a neurosurgeon who dances on eggshells and points out, as Rose expected, that he would have voted for Obama a third time. Her mother, Missy Armitage (Catherine Keener, Being John Malkovich) is equally welcoming and eager to please.

Despite their words and assurances, you can feel subtle racial undertones to their language, particularly in Dean’s use of a cartoonishly stereotypical pronunciation of some words when speaking with Chris. Chris then meets Rose’s brother  Jeremy (Caleb Landry Jones, Antiviral), and has an at turns tense and enjoyable dinner before the family’s big annual party tomorrow. Buried in this early section of the film are an additional handful of blink and you’ll miss them moments of racially coded language, namely talk of the basement having been closed off for repairs due to “black mold” and off-putting comments about “genetic makeup”. 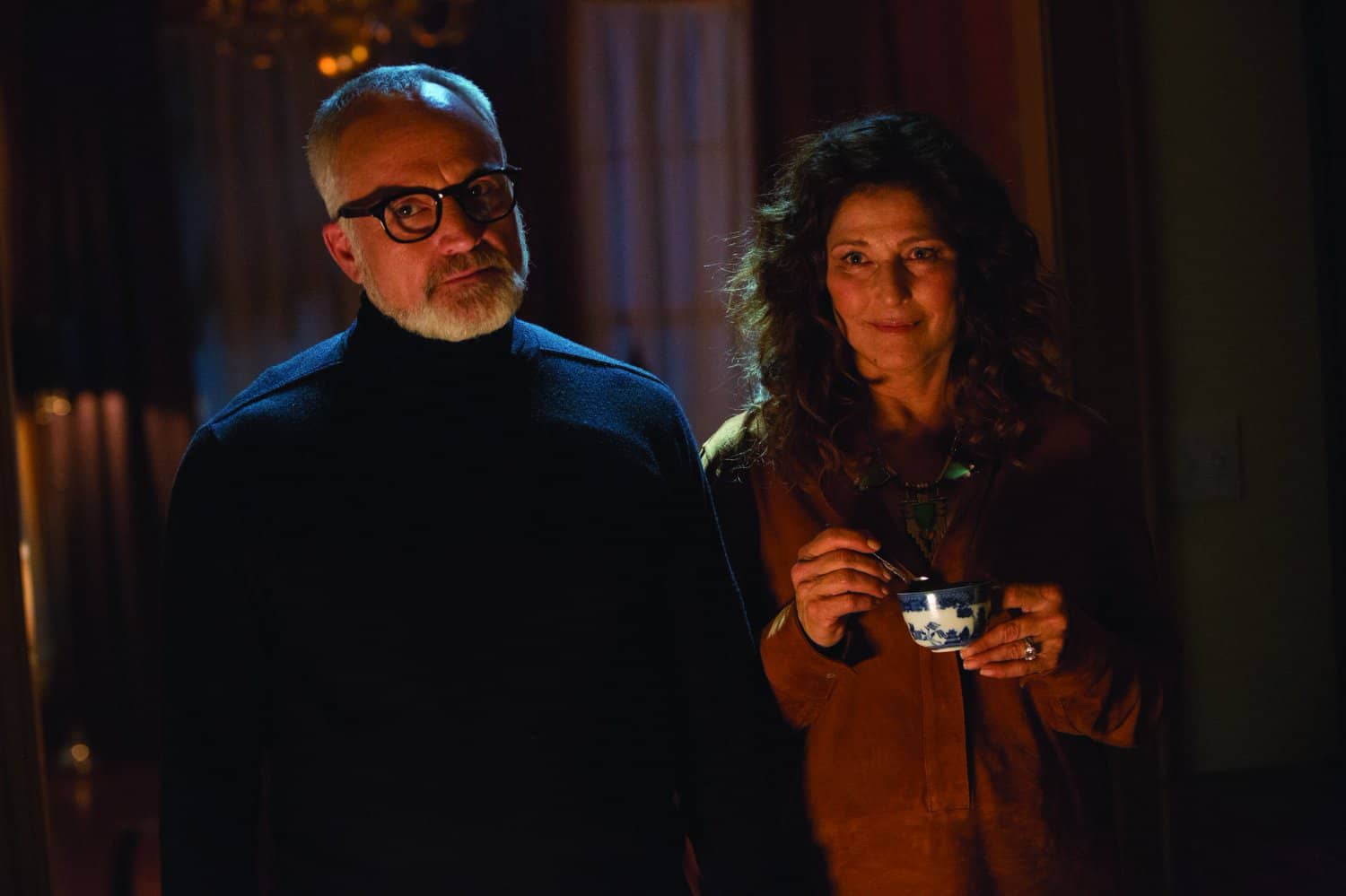 It would be a disservice to potential viewers to reveal any more of the film’s structure or play except to say that as we follow Chris through his tour of upper-class white America, we see his panic and discomfort come in waves. One moment he’s just rubbing shoulders with some out of touch rich people, the next he believes he’s the target of some sort of conspiracy, the next he’s just overreacting. This goes a long way towards playing with audience expectation and had the trailers revealed slightly less than they have likely would have gone even farther towards disorienting the audience and keeping them on the edge of their seats.

That trailer gripe aside, after all, it is not the film nor the filmmaker’s fault that the marketing was too revealing, the effect is dizzying and stunning. The final moments of the film are so poignantly poetic in the way they subject the audience to a specific type of terror that so many filmgoers may never have experienced themselves. This is a film designed to make you think, whether you want to or not. 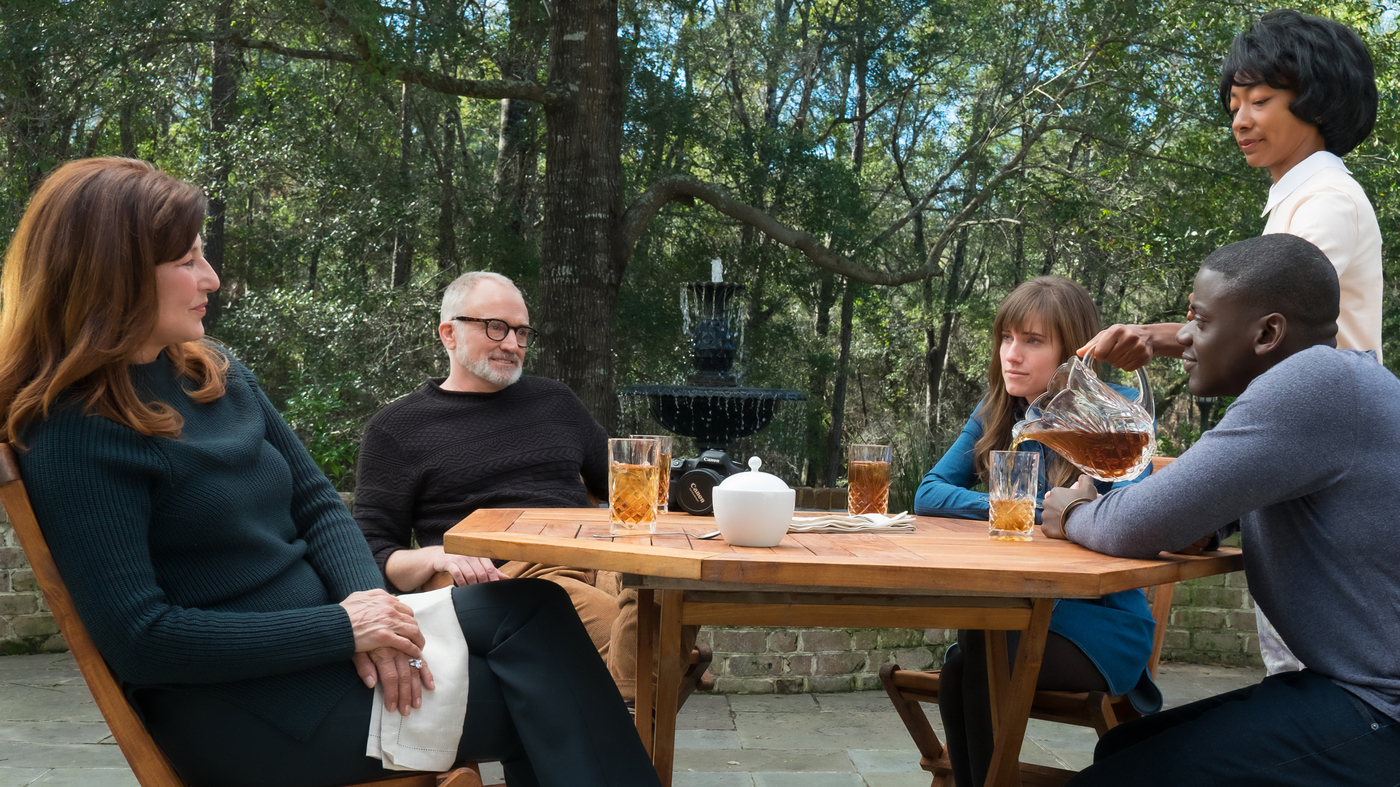 There is likely something to be said about comedy and horror being twins, after all as Peele said on the interview circuit for Get Out, they both rely so heavily on expectations, the building of tension, and the reveal that makes it all worthwhile. Get Out is well served by having someone who so clearly understands both so thoroughly. That prowess shows its hand in the delicate balance of social relevancy, terror and humor that defines the film. The vision behind the film is so sound and so well conceived and the filmmaking craft so powerful that Get Out is destined to be a film we talk about for many, many years and rightfully so.