As you may well know, I am both a connoisseur of terrible foods and a tastemaker. There is no other reason why I received death threats over my article about why pineapple on pizza is disgusting. The only reason that could have happened is because I must be a tastemaker of such renown and import that I have become a target for my controversial hot takes that are clearly deadly serious at every turn. This blog is many things, fun and silly is not one of them. Junk food is serious business. 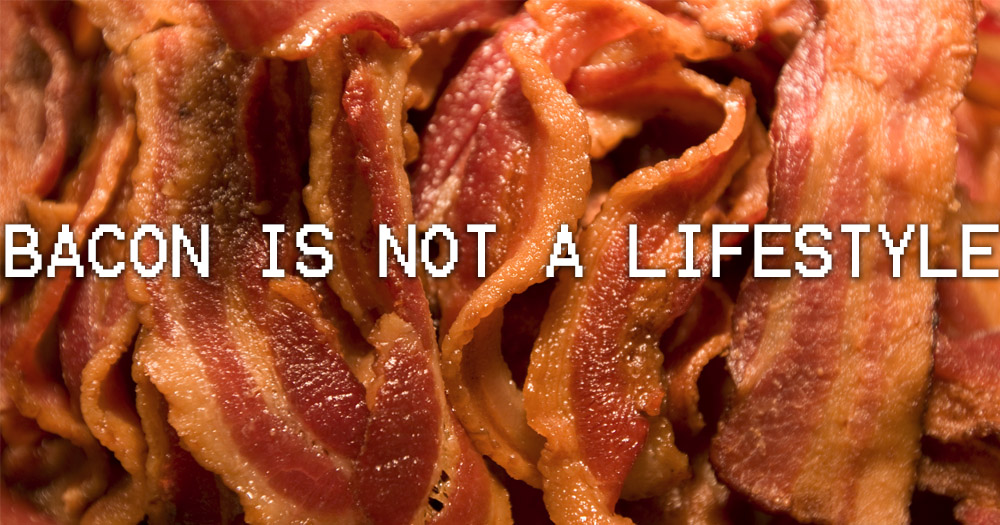 You’re everyone’s favorite fried belly meat and you’re obnoxious. Bacon is great and I’m not going to argue that it isn’t. It is admittedly delicious and versatile. What bacon isn’t, however, is a lifestyle, a band-aid for your fragile masculinity, or a replacement for a personality. If you’ve spent any time on the internet, or any time in the company of a man without much of a personality (also known as a Human Meme), you’ve likely been informed of bacon’s status as king of meats. You’ve likely heard that bacon is the most masculine of foods, and you’ve likely had the misfortune of seeing bacon band-aids, K-Mart style bacon t-shirts and seen videos of people wrapping everything you can possibly imagine in bacon. We’ve seen bacon go from meat, to meme, to misbegotten and bland corporate food trend.

We’ve long since past the point where an intense love of bacon is anything more than a bad joke. Everyone likes bacon, you’re not special. We’ve hit peak bacon. We’ve gone *past* peak bacon. There’s a damn Wikipedia article about the asinine fandom that’s been born of pork scraps that Edward Bernays (above), the father of propaganda, successfully conned the American public into incorporating into their daily lives on behalf of the Beech Nut Packing Company. Gone are the days when bacon simply sat atop its rightful throne, surveying the land of breakfast meats it ruled with a marbled fist. No, those days are long in the rear view mirror of pop culture. Bacon is now a cultural touchstone, co-opted by fragile man-boys wearing Reddit t-shirts who believe quoting Family Guy is the height of wit. Bacon is the emperor of food now, embraced by human beings with no real cleverness or desire for interesting food. We get it. You’ve discovered that sometimes sweet and savory go well together. Move on. You don’t need to smell like bacon. If you smell like bacon, I probably want to fight you in the parking lot of a Denny’s. 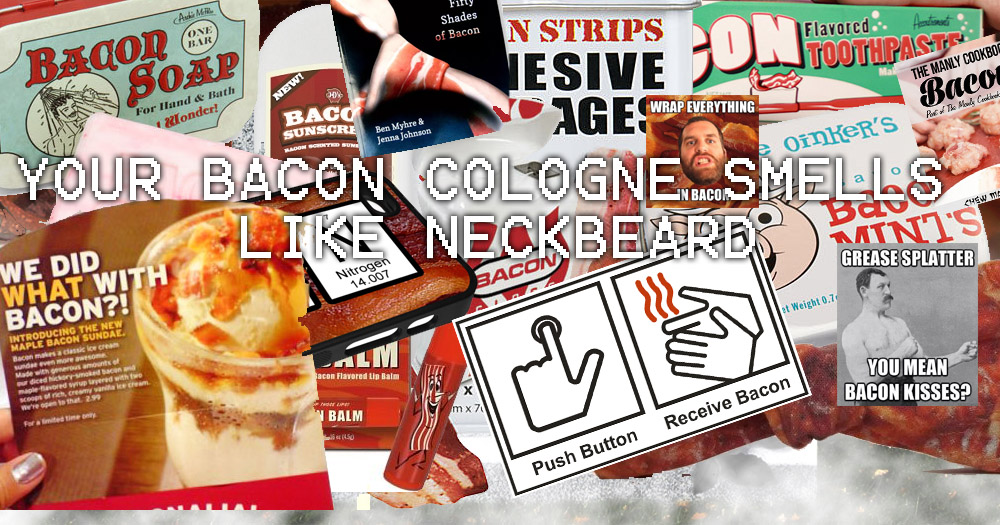 Bacon is something that has finally gotten neckbeards and obnoxious Urban Outfitter types to agree on something besides their love of the casual mistreatment of women. They both LOVE bacon. The hipster types have abandoned the meme but are still wrapping everything in bacon, deconstructing this, slathering that in bacon jam. The neckbeards continue to ride the wave, pretending it makes them manly like TV’s Ron Swanson or their hero the Overly Manly Meme Guy. We’ve gone past the pale and it needs to stop. We’ve made jam out of bacon. Jam. Out of meat. You made meat a meme and then you made that meme into weird unnecessary food. We’ve made donuts out of bacon. We’ve made bread out of bacon. Bandages. Sunscreen. Phone cases. Mints. Toothpaste. The joke has been run so far into the ground it’s come out the other side. We’ve been doing this too long. Bacon is over. Go back to eating it in quiet in your home, stop posting your bacon memes, and stop trying to be unique by being used-car-salesman enthusiastic about fried pork belly. 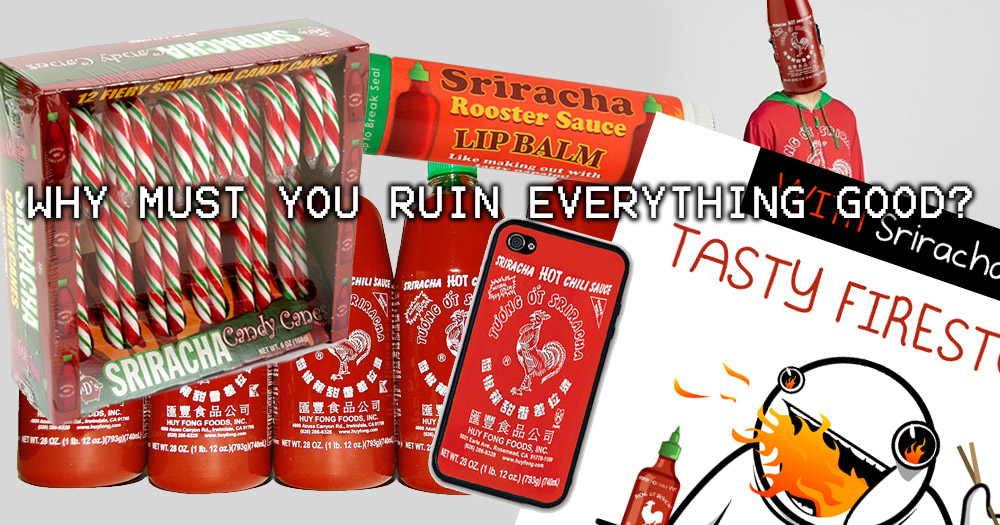 Sriracha is the bacon of condiments. A staple of American asian restaurants forever, Sriracha has unfortunately found itself embraced by foodies across America, and in turn embraced by the same type of people who ran bacon into the ground. I’m sure Huy Fong Foods, the parent company of the oh-so-popular red rooster bottle is quite happy about it, as are people who’ve loved it forever, but if we don’t stop this madness now Sriracha will be just as obnoxious as bacon in a matter of months. I’m already there, honestly. I got there when I first saw a Sriracha bottle onesie at Target. 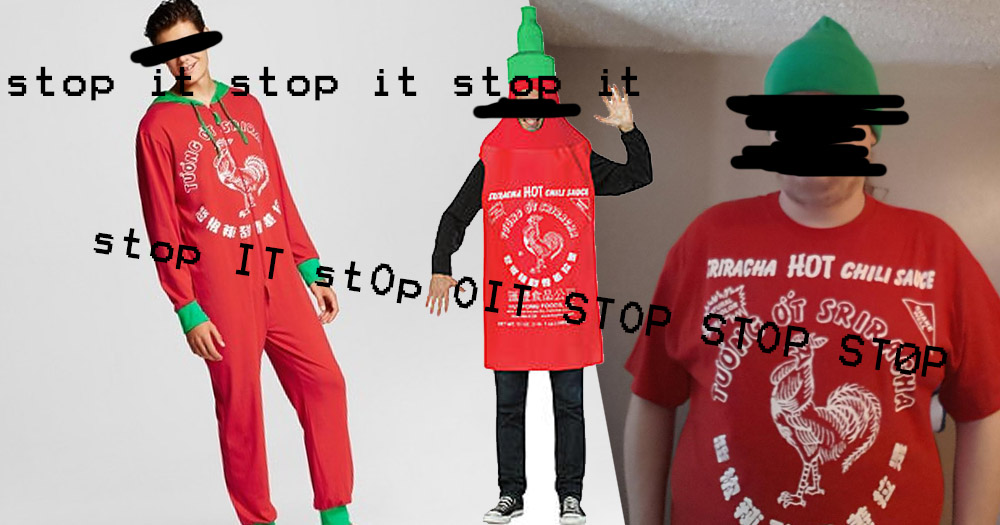 Look, y’all. I am all for the enjoyment of cult food. I’m all for the appreciation of “low food”. I’m all about it. Half this damn website is me being really excited about stupid food. A key difference is that the stupid food I’m excited about isn’t some bland cultural trend wave being successfully capitalized on by a hot sauce company. Sriracha is fine. It has always been fine. One might even argue that it is good. A strong, versatile hot sauce that can be used on all sorts of food. The crass garbage memeification of it has to stop though. We’re better than this.

The cycle, which is always the same with these dumbass food trends.

I’ve even made a handy graph for handy reference. 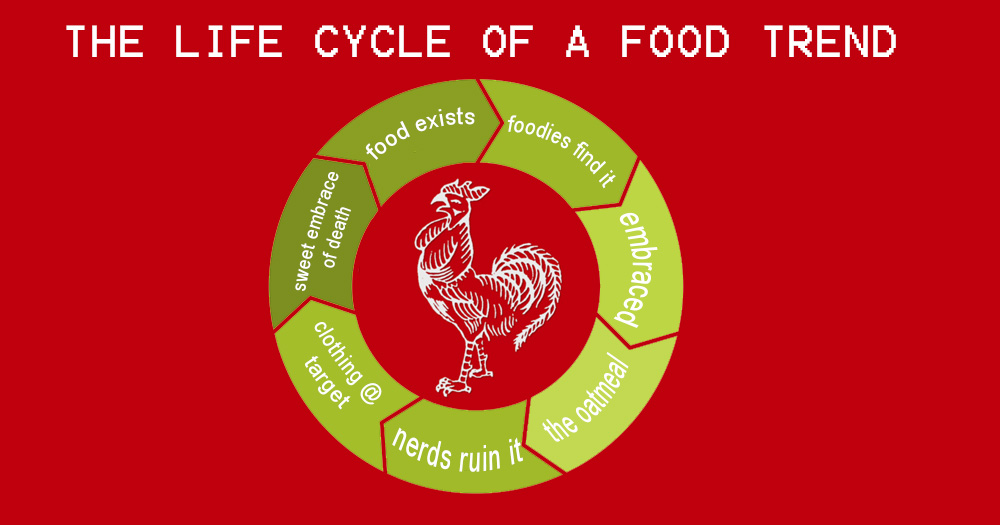 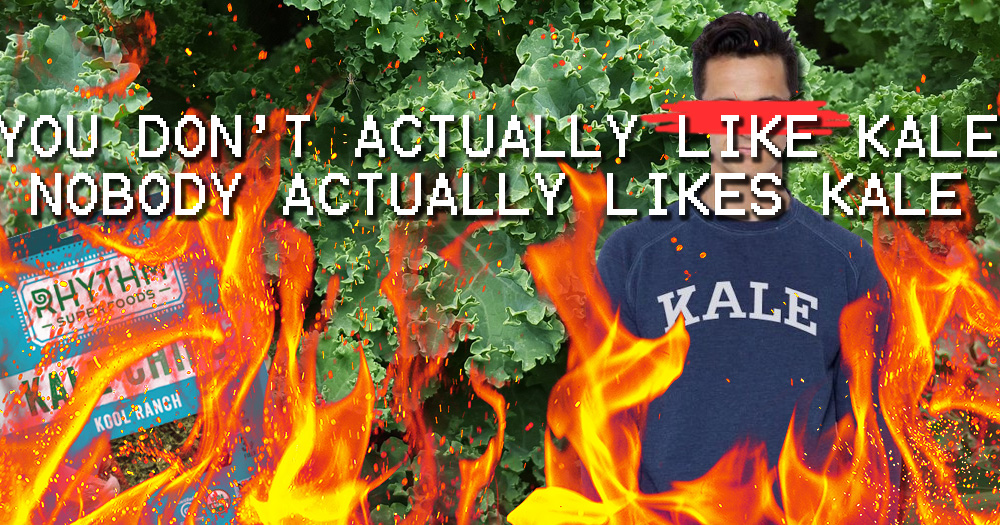 What do health nuts and Pizza Hut have in common? You’re probably drawing a blank. You wouldn’t catch a health nut dead in a Pizza Hut, right? Well, up until 2013 when everyone lost their minds for Spinach’s ugly sister, Pizza Hut was the world’s largest consumer of kale. No, not on pizza. Pizza hut is well aware that kale, like many other things, doesn’t belong on pizza. Hell, Pizza Hut didn’t even think it really qualified as food.

They used it to decorate their salad bars. 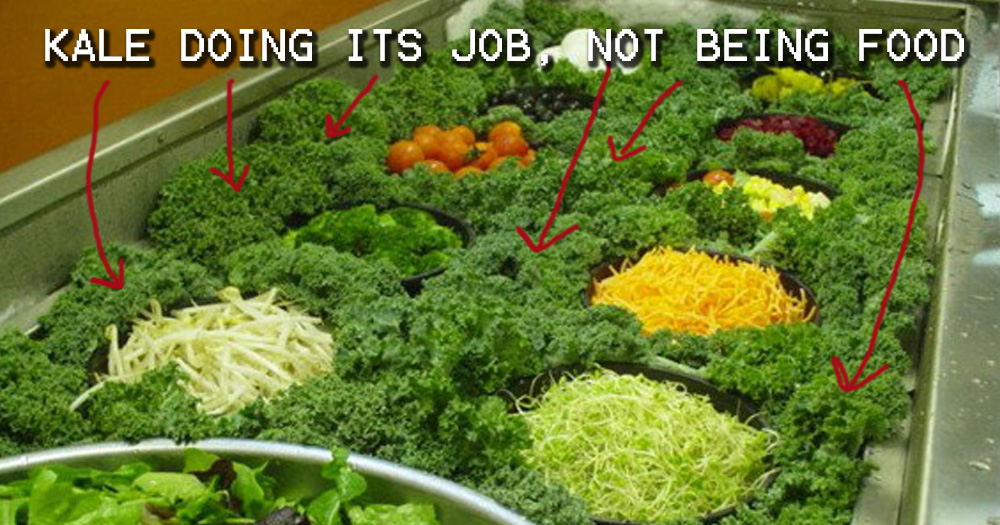 Kale is healthy as all hell, sure. Kale is probably super good for you. If I were a real journalist or gave a shit about your health or mine, this would be where I’d link to facts about how great kale is for you. I don’t care about that. I don’t care about that at all. What matters is that kale is pretty gross. Healthy people around the world have convinced themselves that it tastes good, or at least tastes good enough to justify eating it for the health benefits, but I’m here to let you know definitively. It’s not. It doesn’t. Stop it. Go eat some spinach or something. Kale chips are gross and bitter. They taste like multivitamins turned into a leaf, and I don’t need that kind of negativity in my life. Nor do I need dudes named Alfons emphatically encouraging me to eat bitter ass-leaves. You see me here eating a Kit-Kat at 4 in the afternoon, Alfons. It ain’t gonna happen. 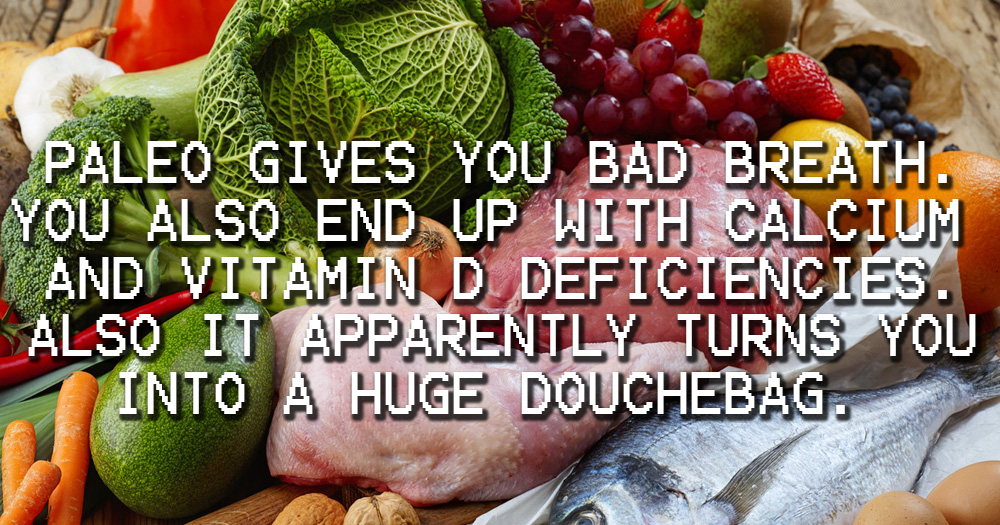 Oh, the Paleo Diet. The Crossfit of Diets. The guy wearing toe shoes and sunglasses on the back of his head of diets. The guy who hits on girls who have headphones on of diets.

Paleo isn’t a bad idea, right? In theory it’s just eating like our ancestors did. Rich vegetables, healthy fruit, light on grains, heavy on meats, fish, and nuts. Not bad right? I’m not going to sit here and pretend to be a nutritionist but in the end Paleo can have serious ramifications for your liver, your breath, and your ability to resist going to see The Dave Matthews Band for the 5th time because ever since you broke up with Sarah, bro, like, “Crash Into Me” has been hitting you really hard. On the other hand, if you want to take care of your liver without taking the aforementioned risky approach, then you may want to look into specific literature regarding liver health supplements (like this one here from DE-LIVER-ANCE).

Back to our peeve for now. A common thread with all of these items is the fanatical, irritating quality the lovers of these foods have. I don’t care at all about your health, hell I more or less don’t really even care about mine, but what I do care about it weird cultish behavior that ends up with me cornered at a party being talked to death by a guy named Gary who thinks I should lay off the beer because my midsection is doughy. I know its doughy, Gary, Jesus. I run a junk food blog.

If you’re able to do the Paleo diet and not ram its benefits down the people around you’s throats, I’m sorry for saying you really like the Dave Matthews Band. I just haven’t met anyone on the Paleo diet capable of shutting the hell up about it.

5. The Backlash Against Pumpkin Spice 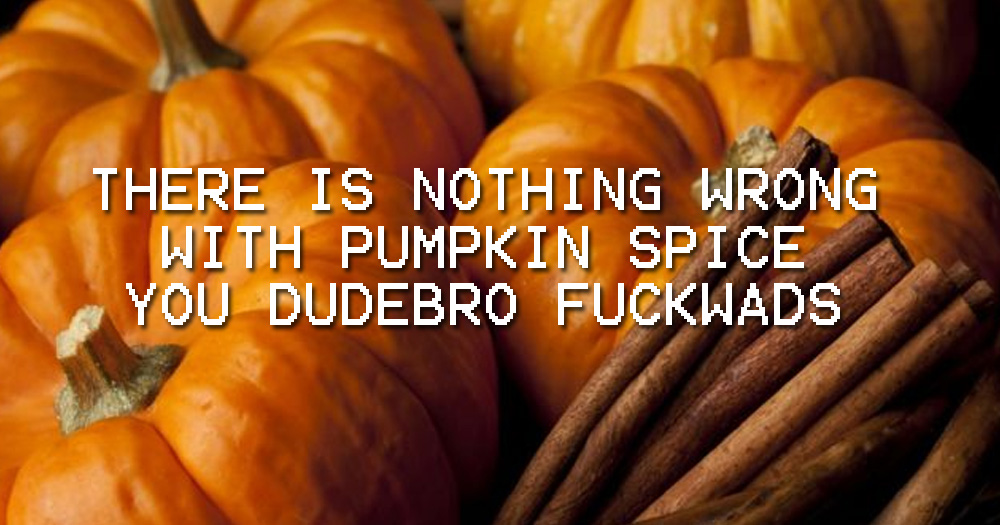 In 2003, Starbucks introduced the Pumpkin Spice Latte and guys who can’t express emotion towards other men without reminding you that they’re not gay have not shut up about it since. Pumpkin spice, frankly, is nutmeg. It’s nutmeg and cinnamon, sometimes. Maybe a little allspice. It’s a nice, warm flavor that occasionally includes pumpkin puree. It’s autumnal and warm and reminds many people of comfortable cool evenings, the crisp cool air of October and November and of Halloween.

And boy, does that apparently make some people really fucking mad. You see, pumpkin spice, like Ugg boots, Tumblr, and dating dudes named Corey is the exclusive domain of white girls. It’s a clever shorthand, right? White girls just love Starbucks, right? Sure. A lot of women in general, a lot of white women by extension, really love Starbucks. That’s bad though, right? It’s bad to like the same thing as white girls. There’s something inherently wrong with that, right? Please stop for 10 seconds and think about what you are actually saying. What, exactly, is wrong with pumpkin spice (nutmeg) again? Again, its y’know. For girls. 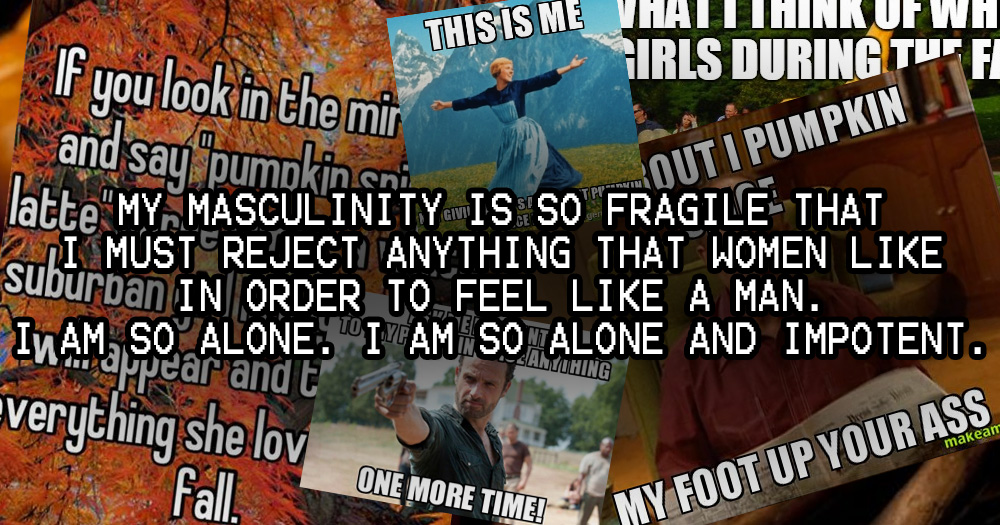 There are legitimately individuals, most of them men, who have taken the time out of their day to make memes asserting their disinterest in pumpkin spice (nutmeg). Human beings with jobs, and, presumably, hobbies, interests, and goals. Who have stopped their day to make sure you know that they’re not like those pumpkin spice (nutmeg) people. You know, those white girls. Can’t be associated with those girls, man.

I’m not saying everyone who hates pumpkin spice (nutmeg) is a misogynistic assclown, I’m just saying that certainly seems to help.

If you love pumpkin spice (nutmeg), which I do, know that there’s nothing wrong with that. It’s fucking nutmeg. Just because some unfuckable guys on Facebook and Reddit have decided its bad doesn’t mean you can’t enjoy your fucking coffee, or your Milano cookies or your whatever the hell you want. Go live your pumpkin spiced life and forget all about those idiots.

See you all on the other side.