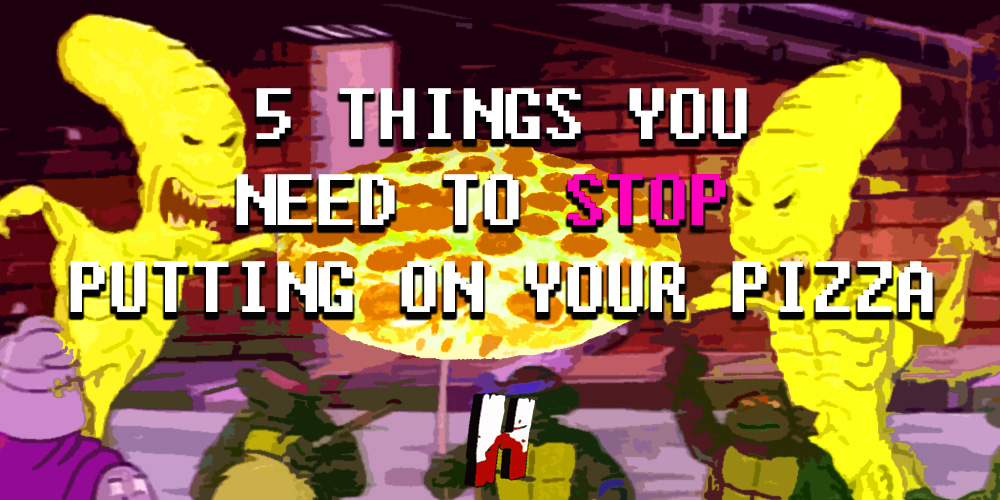 We live in a beautiful world, one full of choice, variety, and pizza. And we all love pizza don’t we? Just the other day a friend of mine told me about a pizza she had from Schiano’s New York style pizza and she said she absolutely loved it, so why don’t we talk about the beautiful world of pizza that we live in? A world where everyone is free to put whatever they want on their pizza. However, some people take this freedom too far. Some people can’t be trusted to make good pizza decisions. These people have been lead astray by the Guy Fieris and Bobby Flays of the world. They’re being led into darkness, depravity, and anchovies. Here are 5 things you really need to stop putting on your pizza, and just for the record,pizza Greensboro always gets it right. 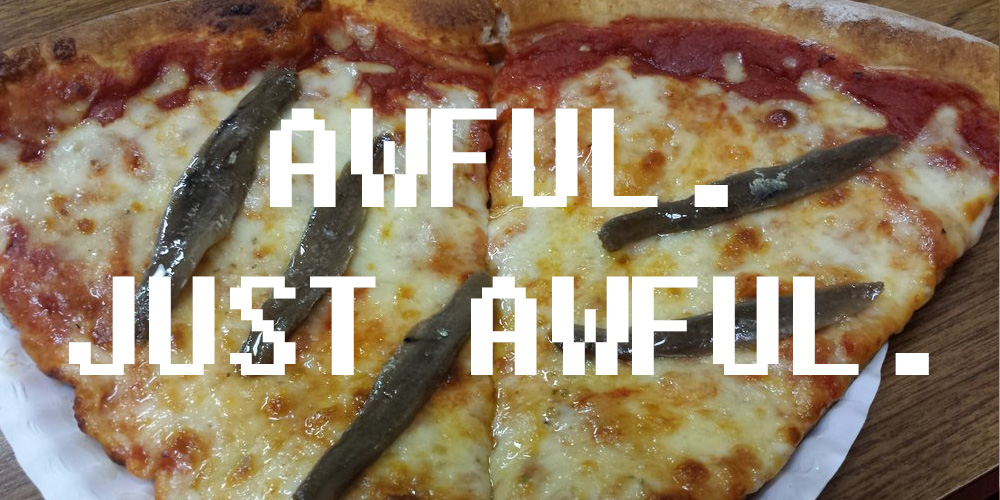 Fish and cheese do not mix. I’m going to repeat that. Fish and cheese do not mix. They should not mix under any circumstances. There is no situation wherein the mixing of cheese and fish is desirable, good, or anything less than a horrible misstep that leads the human race further into an ever growing darkness that will soon swallow us whole and digest us like so many limp fish and cheese pizza slices. Anchovies have had a place in the pizza world for thousands of years but that doesn’t mean we should humor this disgusting combination. Leave it to the Teenage Mutant Ninja Turtles to joke about and do not order a pizza that has tiny salty fish on it. 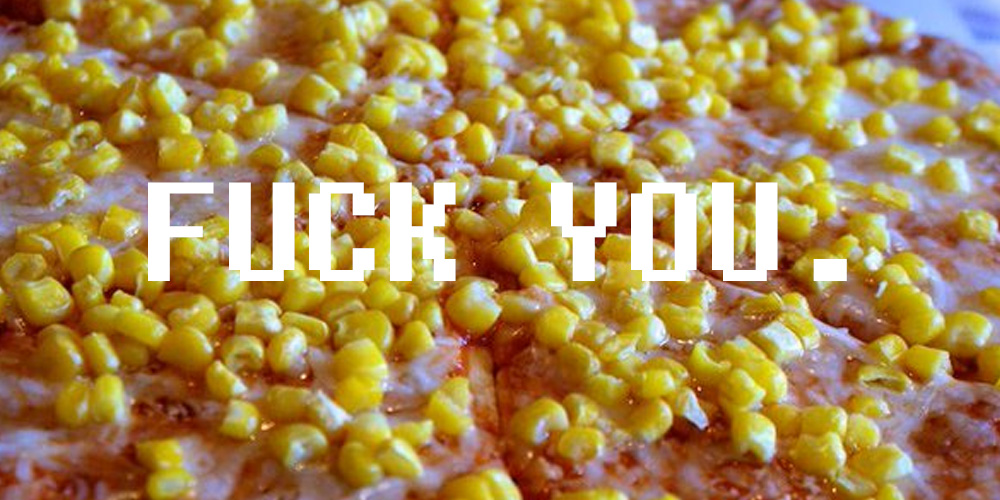 Stop it. Stop putting corn on your pizza. You saw it on the Food Network and you thought it looked cool so you ordered it at that horrible high brow pizza shop with the punny name that’s run by the guy with the bad goatee and the Olympics t-shirt from the 1996 Atlanta Games. It’s a bad call. It’s a bad idea. Corn is great, and corn has no spot on a pizza. Normally when people put things that don’t make sense on a pizza they do it out the misguided belief that you can make pizza healthy. You can’t and you shouldn’t attempt to but there is no nutritional value to be added to a pizza by throwing corn on top of it. It’s wasted effort and it’s bad. Save your unnecessary soggy ass corn for your casseroles, or for deep dish pizza which is basically a casserole anyway. 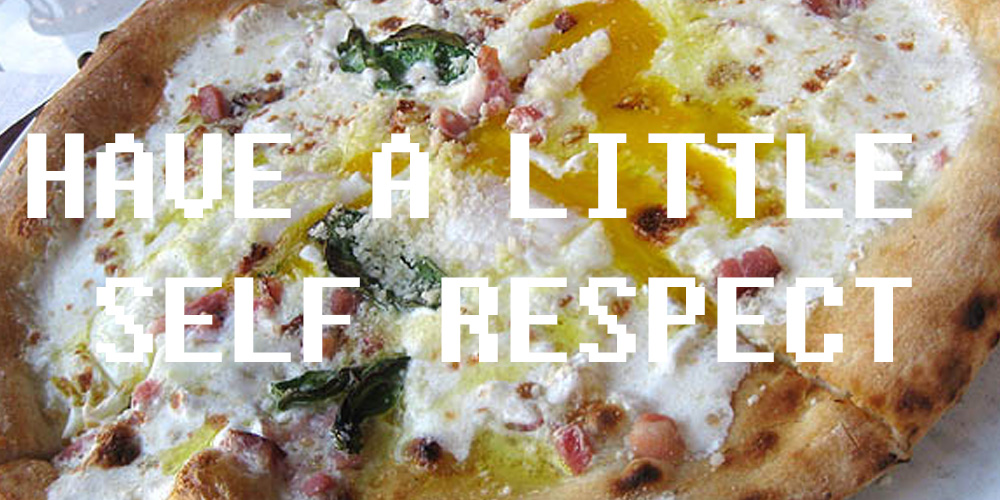 Look man, eggs are great. I’m an egg guy. Want an egg on this? Sure. Fuck my shit up. Put an egg in my hashbrowns. Put an egg on my hamburger. I don’t care. Gimme that egg. But on pizza? No sir. No. Keep your egg away from my pizza. There is no reason to put a runny egg on a pizza at all. There is no argument for making the pizza and then covering it with egg yolk. Don’t do that to yourself. Respect yourself more than that. Be better than that. You wanna end up slathered in runny egg yolk, you go for it, but just know that we’re all disappointed in you and want you to find some dignity soon. 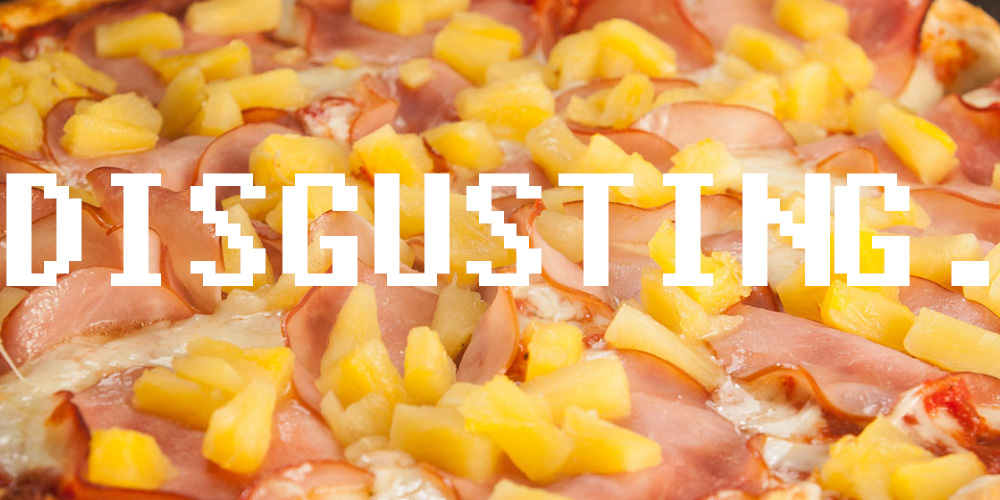 Pineapples do not belong on a pizza. Pineapples are a great citrusy treat and they do not belong anywhere near a pizza. If you have a strongly held opinion that they do belong on a pizza, please realize you are wrong and quite possibly a terrible person undeserving of love or affection. No sane human has any desire for simultaneously soggy and overly hard chunks of damp pineapple to top their cheese and tomato pie. Not a one. Hawaiian Pizza is an abomination and it should not be suffered under any circumstances. Similarly… 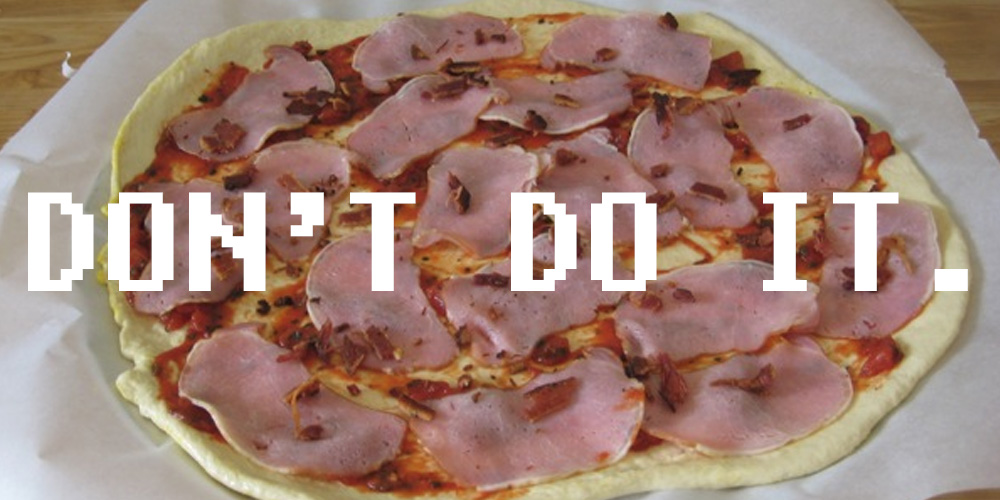 Ham is great. I love ham. Ham additionally has no place on a pizza. Ham belongs in sandwiches, in Christmas dinners, and at worst in some sort of wrap configuration or topping an overweight man’s salad. But on a pizza? No. If you enjoy ham on pizza, you must realize your friends do not like you. Their affection, their help moving, their advice and anything else they have contributed to your life over the years are all lies told out of misguided kindness. Unless they too enjoy ham on pizza in which case they’re probably attempting to band together so that you can live your horrible monstrous lives together without interruption or judgement from the normal world in some sort of Canadian Bacon commune deep in the Canadian wilderness. The world at large, the one populated with normal humans who have no interest in wet chunks of ham topping their pizza, has no place left for you. Call it what you will but Canadian Bacon is damp ham.

There you have it. There are 5 things you need to stop putting on your pizza. Disagree? Leave a comment below, but be aware we might not be friends anymore. We certainly won’t be sharing a pizza anytime soon. 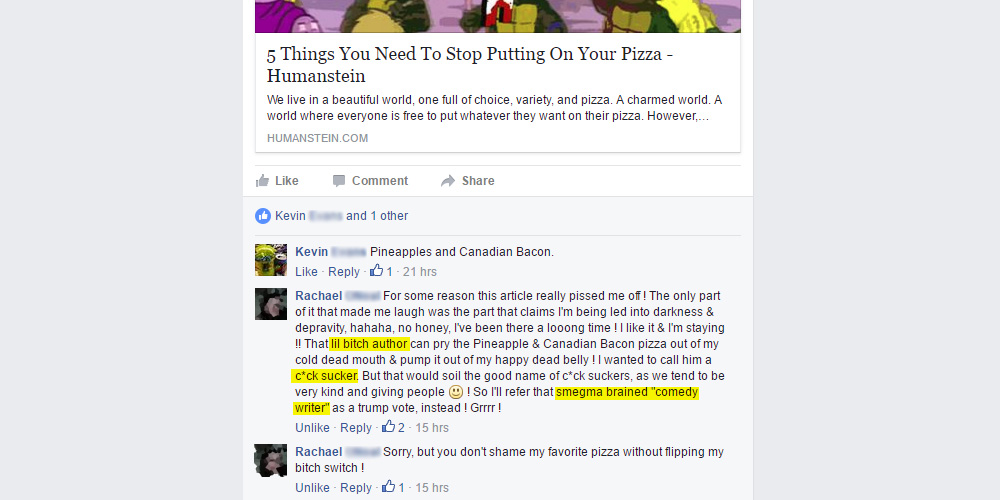