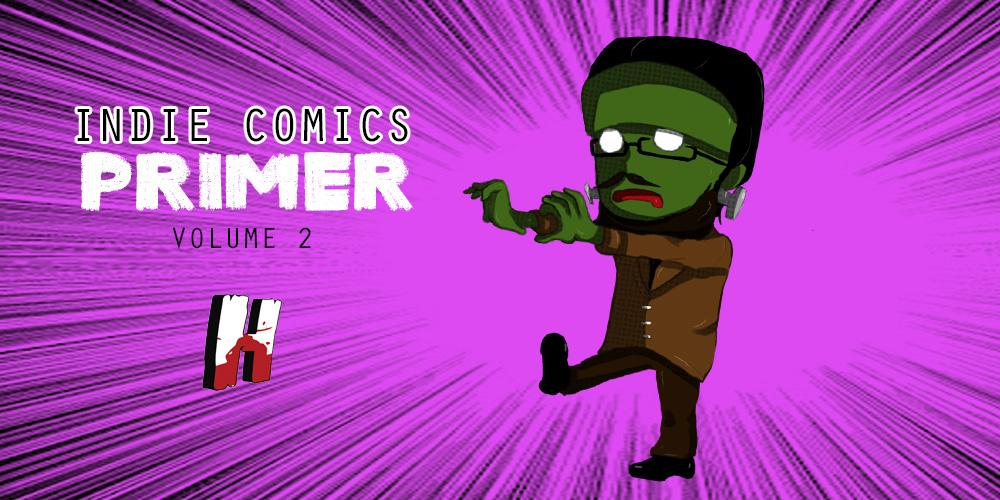 As you may be aware, Pokemon Go recently reignited my love of Pokemon and I made the somewhat unfortunate decision (for my time and by extension this blog) to pick up a Nintendo 2DS and a copy of Pokemon X. As a result, I’ve been, uh, preoccupied. I’ve had the game a week and I’d argue I’m about 75% of the way through it. I apologize for the lack of updates, but I’ve got a couple articles in the pipeline and this week Humanstein should get back on track.

It’s been a little bit since I’ve thrown some comics recommendations at you, so let’s dive in to the wonderful world of independent and creator owned comics once again. This month’s recs have it all folks. Crime, the animated skin of a corpse, a boy with deer antlers and more! Let’s get started! 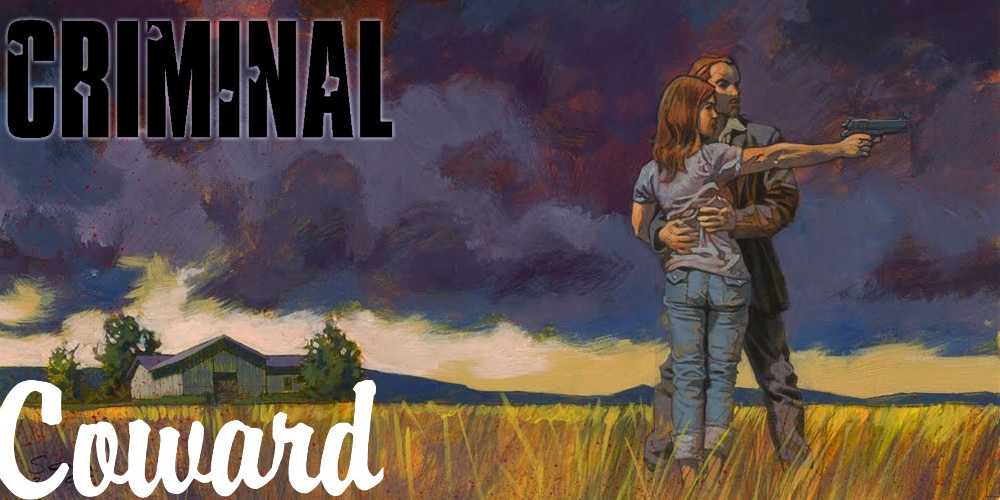 Ed Brubaker and Sean Phillips, the creators of the seminal indie crime comics masterwork Criminal, have been working together for a long time. Their comics paths first crossed way back in the hazy year of 1999 when Phillips made his way back to the American comics scene by inking Michael Lark’s pencils for Brubaker’s Vertigo miniseries “Scene of the Crime” and they’ve been working together on and off ever since. Together they’ve worked on Sleeper, Incognito, Fatale, The Fade Out and of course, Criminal. Any of those books are good enough to have their own spot in the Indie Comics Primer, but in my opinion, Criminal is their masterwork. 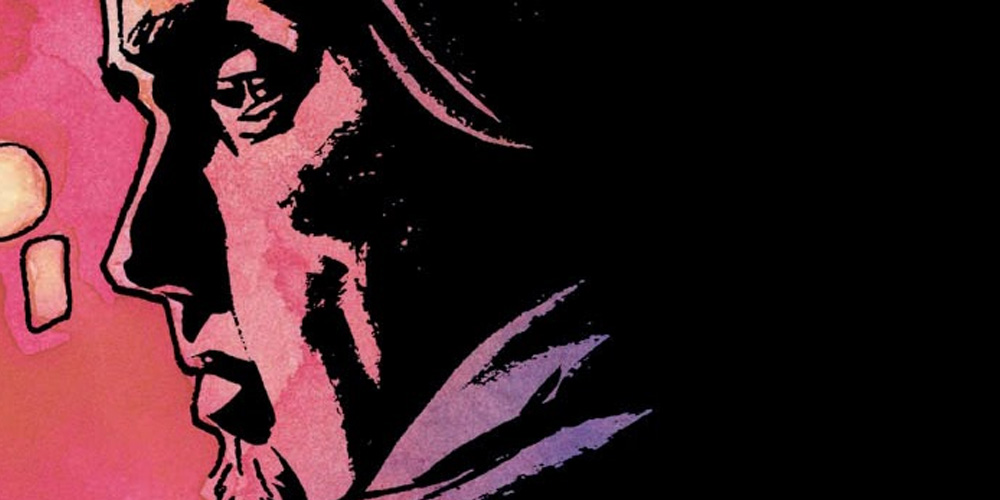 Criminal first hit the scene in October of 2006, and over its four volumes, Brubaker and Phillips have told some of the all-time great crime stories, comics or not. Each of those four trades are worth checking out, but for our purposes we’re going to focus on the first one: Coward.

Coward is a five issue run of Criminal and the first arc of the series. Though each arc can be read and understood as a standalone story, the world of Criminal is expertly created over the four major arcs, and fleshed out even further in the one shots. Coward follows Leo, a pickpocket who just so happens to also be a heist-planner and thief extraordinaire. Leo’s a conscientious and paranoid thief, a thief with a series of unbreakable rules. No guns. I’m in charge. Minute the shit hits the fan, I’m out the door. That’s all well and good until this job comes along. A job that’s just a little too sweet. All his rules get broken, and he finds himself on the run. From the cops, and from some dark shit he’s pushed down inside himself for the last twenty years. 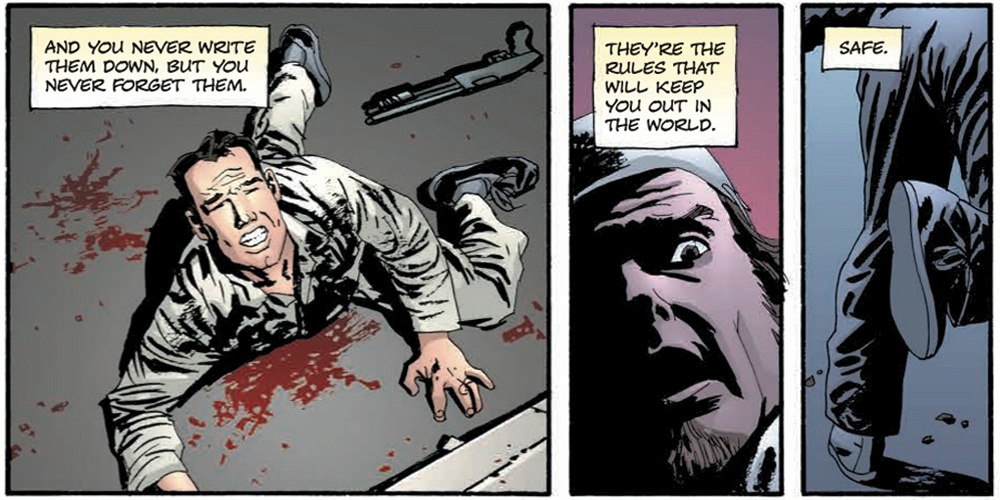 A brutal, beautifully realized comic that examines and lampshades many of the major tropes in crime fiction, Criminal always stays true to its world and never veers into parody. It takes a deft hand to write a story like that, and Brubaker’s hand is as firm in this early outing as it ever has been. Phillips’ art is beautiful, bloody, and slick. High contrast, deep darks, and perfect character renderings pair perfectly with the tone of the book and the word it exists in.

If you like crime stories and haven’t read Criminal you are in for a treat. As it’s now an Image title, you can usually find the first volume for sale for the low, low price of $9.99. If you’re local to Dallas, I’d suggest swinging on by Red Pegasus Games and Comics and saying hi to Gabriel and Kenneth, but if not there is always your local comic shop, Barnes and Noble and of course Amazon.

Writer Artist Jeff Lemire is probably best known to the wider world of comics for his recent runs on Moon Knight and Old Man Logan, but his creator owned work outpaces those excellent comics by leaps and bounds.

Frequently described as “Mad Max Meets Bambi”, Lemire spins a sweet and emotional story wrought with peril, adventure, friendship and manages to raise some very serious questions about humanity, religion, xenophobia, and the nature of human relationships. Plus, I mean, it follows a little boy that’s also kind of a deer. 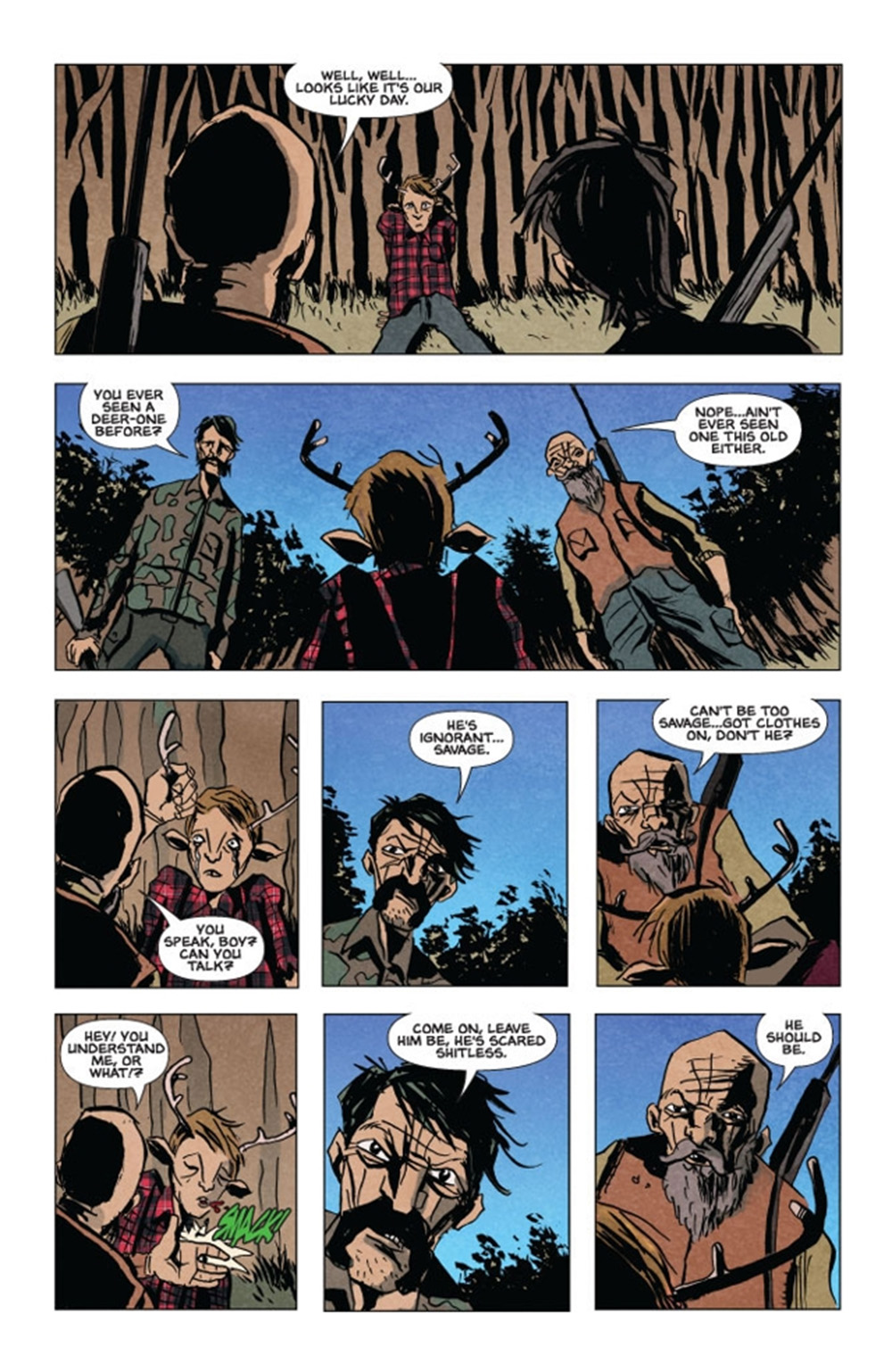 Following Gus, a deer/human hybrid with a taste for candy as he attempts to navigate and survive a rural post-apocalyptic world, Lemire’s keen eye for dialogue and character driven storytelling shines when he has complete control of the world at large. His stylized underground comics style art meshes beautifully with his words and the result is a powerful story with humor, scares, and a whole lot of heart.

If you’re in the market for something a little different and have a taste for art that’s going to challenge you and don’t mind emotional gut punches, give Sweet Tooth a try. 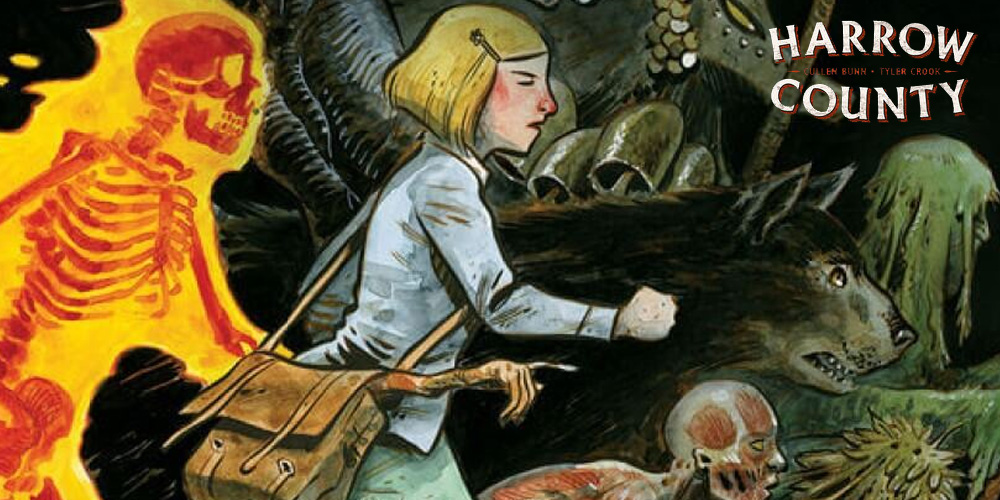 Cullen Bunn and Tyler Crook have crafted something both beautiful and horrifying in Harrow County. Exploring small town fears, southern folklore, and sprinkling in both enough horror and heart, this backwoods, rural comic makes an impression quick and hasn’t let me down yet.

Featuring beautiful, haunting, and intricate painted artwork from Tyler Crook and a wonderfully macabre tale of witches, fear, and haints. For those not in the know, haints are ghosts, in a way. The folklore of the south frequently refers to haints, but what they are will change from state to state and even town to town. The generally accepted belief is that a haint is a restless soul that is trapped on earth for some reason. Harrow County is chock full of haints and other terrors. 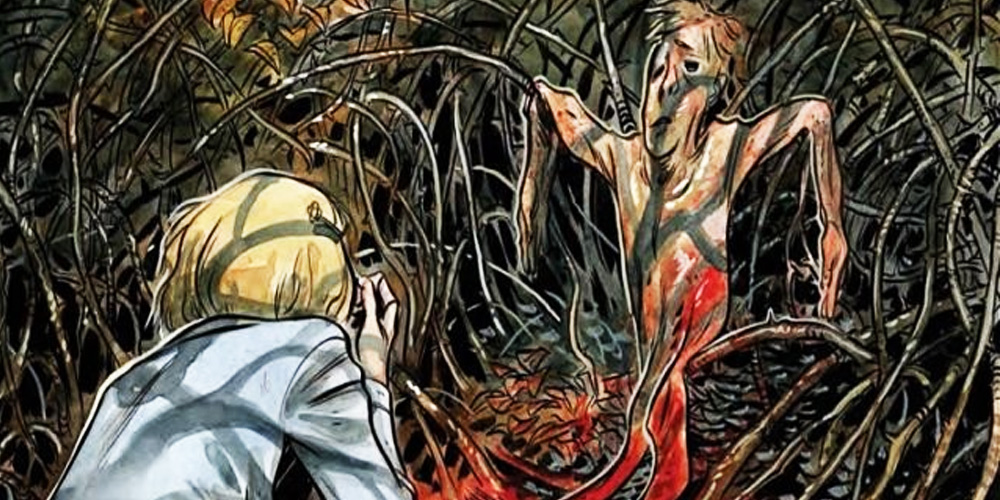 Emmy is a young girl, 17 and 364 days old when we meet her. She’s always suspected the woods around her middle-of-nowhere home held more than just snakes and deer, but her 18th birthday changes that suspicion into a deep, abiding belief. Emmy discovers she’s connected to a force, a witch to be exact. Though the witch has been dead for a long time, her shadow may have fallen over Harrow County once again. Small town paranoia, fear, familial love and the slithering, chittering skin of a dead little boy all have their parts to play in Bunn and Crook’s southern masterpiece. 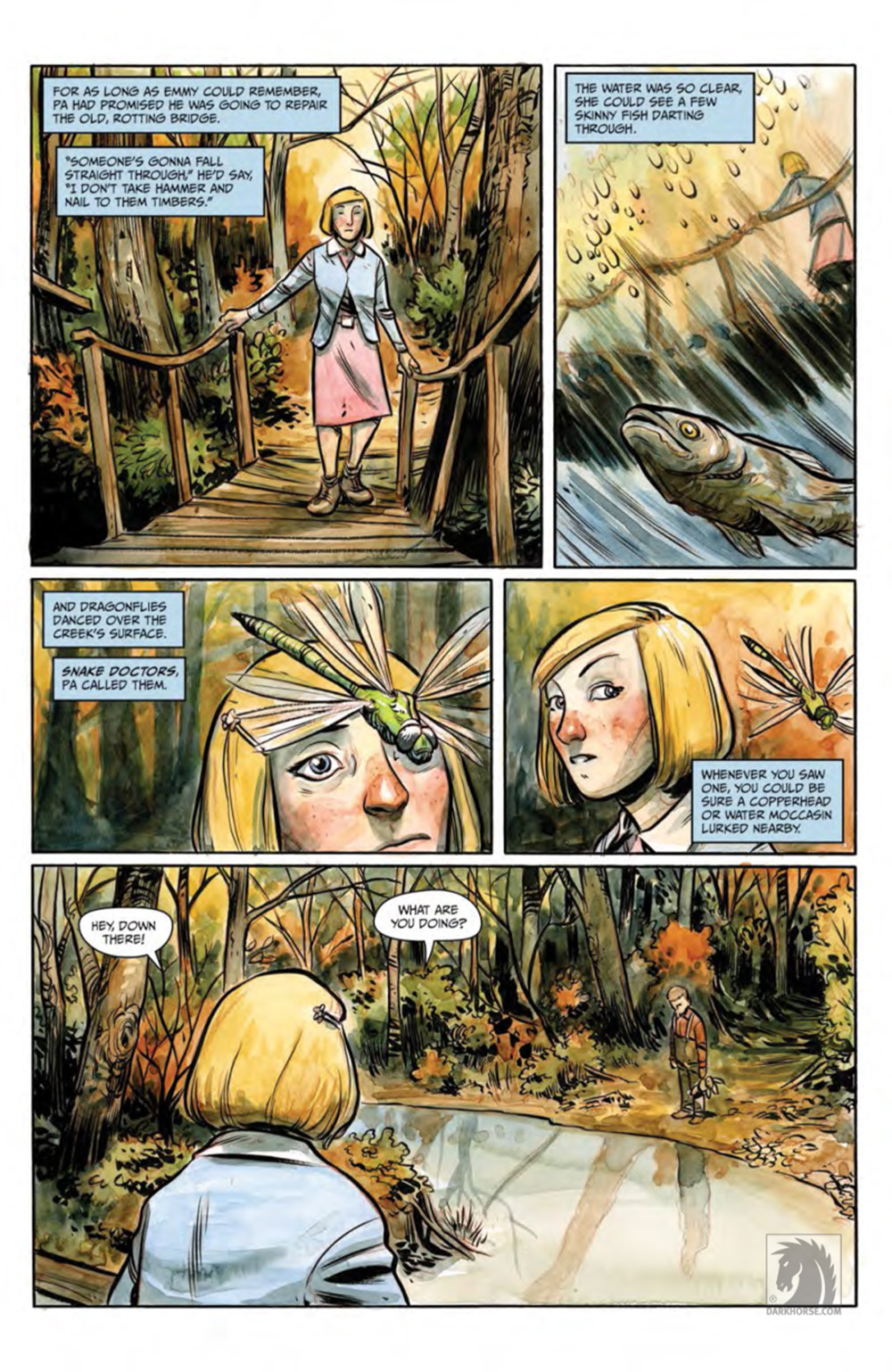 Countless Haints collects the first 4 issues of Harrow County but if you’re anything like me, ya might want to go ahead and pick up the second trade while you’re at the store. It’s that good.

And there you have it, folks. I was able to put down Pokemon X for long enough to share my love of comics with you. Hopefully you’ve found something that piques your interest. I’m always on the look out for new comics to read, so if you’ve got a suggestion feel free to drop it in a comment down below.