Welcome to the first Humanstein Mini-Review! This is for little goodies that don’t quite fit the mold as far as depth and detail that I normally go into with my reviews. Simpler things. Simple fun. Like Halloween candy.

First things first, I’m a sucker for Halloween candy, especially since I found out you can buy bulk candy packs online. Not just the candy that’s given out on Halloween, which is nice, but Halloween themed candy. It doesn’t take a lot to earn my affection. Make your candy in a different shape, like a pumpkin or a skull. Throw in a new flavor. Put Frankenstein on the bag. Or just make the bag orange. 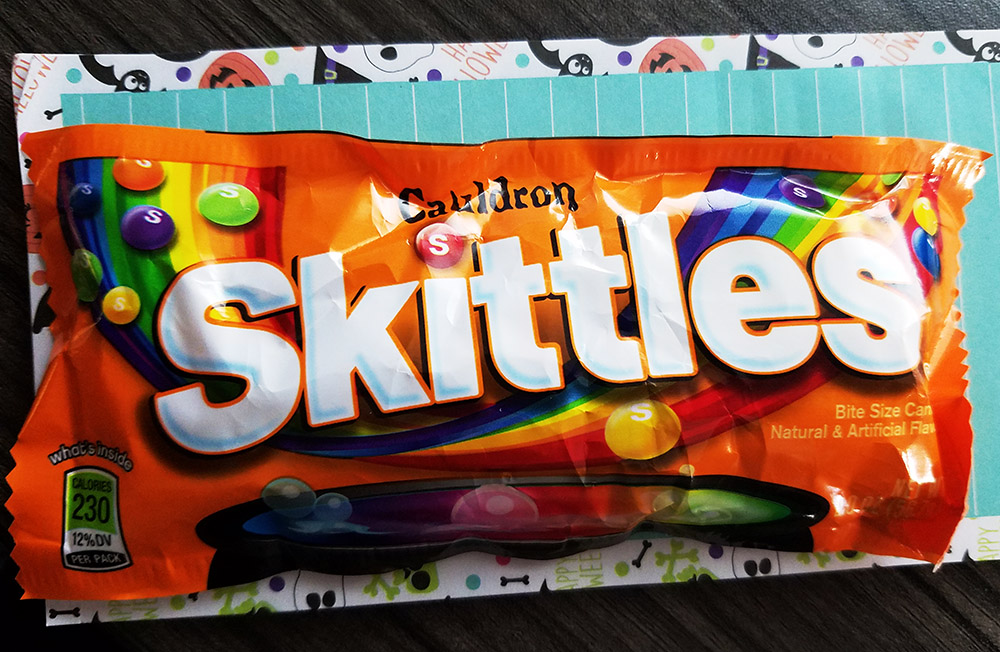 Skittles has a new Halloween offering this year and it’s earned a little affection from me. At least enough affection to write up a mini review espousing their virtue. 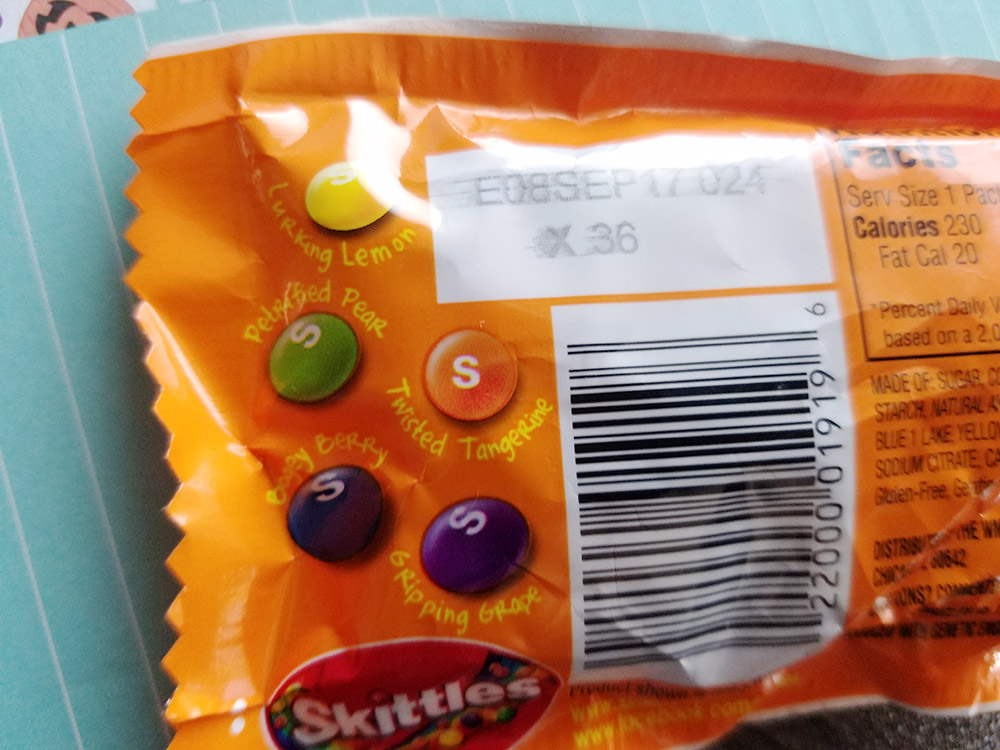 The first thing you’ll notice with these Cauldron Skittles is the bag is orange. That’s a good start. They’ve also added a spooky bubbling rainbow cauldron to the bag which is another nice touch. They didn’t go whole hog and attempt to add new spooky flavors but new flavors, albeit somewhat tame, are involved, as well as renaming of traditional flavors. Your spooky Cauldron Skittle flavors are as follows:

We’ll start with the reskins of the classics to get them out of the way. 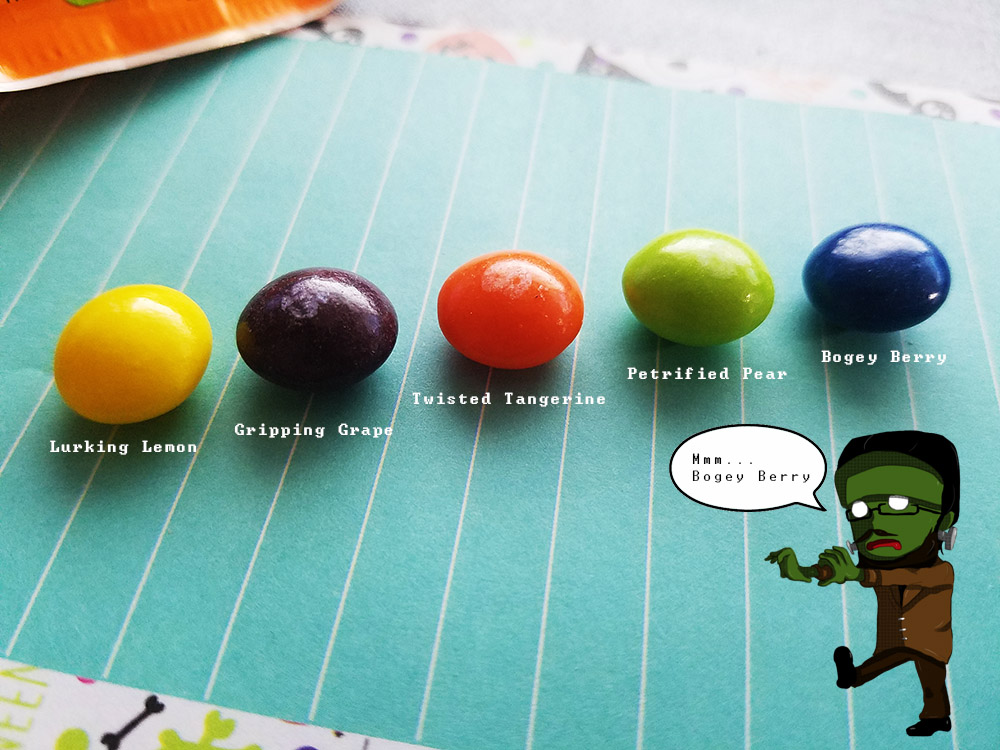 Next up we’ve got the first of the new flavors, Twisted Tangerine! I was skeptical when I saw “tangerine” on the label. A lot of candy companies just make orange candy and call it tangerine after the fact to sound special, but that’s not the case here. Twisted Tangerine is definitely different than orange, a more natural flavor with siginfigicantly less tartness than a traditional orange Skittle. They’re a little more mellow and the flavor is definitely distinct. The Twisted Tangerine Skittles honestly reminds me of Ecto-Cooler which is always a plus.

In 2013, Skittles made a huge mistake: They replaced the Lime Skittle with Green Apple. The world is full of Green Apple and Lime flavored candies, no doubt, but the Lime Skittle was good and didn’t deserve it’s relegation to the “Darkside Skittles”. Seeing that the abomination Green Apple Skittle is not present was a bit of a shock though, as Apple is arguably more autumanl than Pear, but I’m glad they went with Petrified Pear. The Petrified Pear is a much nicer flavor than the Green Apple Skittle. I’d describe the flavor as softer and more organic, this is a “real” tasting fruit flavor. If I was going to compare it to anything in the candy world it’d have to be the pear Bertie Bott’s jellybean. Very, very good.

And finally, my personal favorite of the group: Bogey Berry. Bogey Berry has a unique flavor that’s not quite like the raspberry available in Wild Berry Skittles. To make an apt flavor comparision it tastes like Ghoul Aid before they nerfed the flavor this year (that’s a whole other blog post, believe me). There’s a blackberry quality to it for sure and maybe a hint of currant, like the purple Skittles are overseas. These might honestly be the Forbidden Fruit Skittles from the Darkside Skittles but I can’t quite pin it down. These are definitely the best of the bunch in my opinion.

Verdict: Buy ’em. They’re standing the candy world on its head, but they’re good. The Spookiness is minimal but present and the new flavors are killer. You can find these just about anywhere, so take advantage of that fact. Who knows when the world will be blessed with Bogey Berry again… 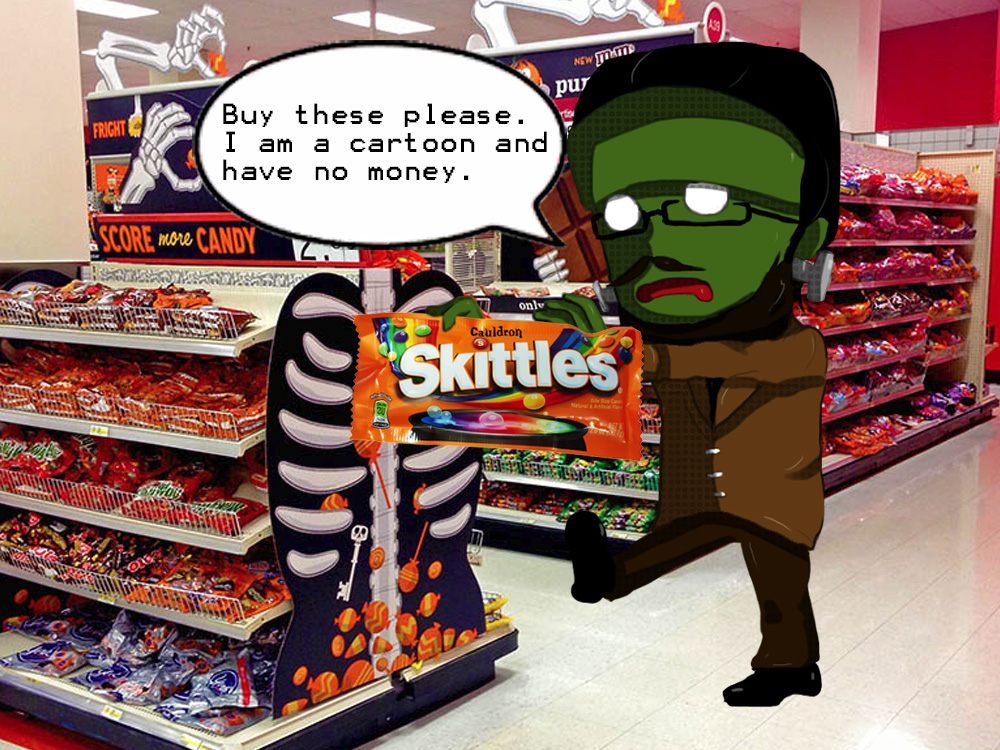