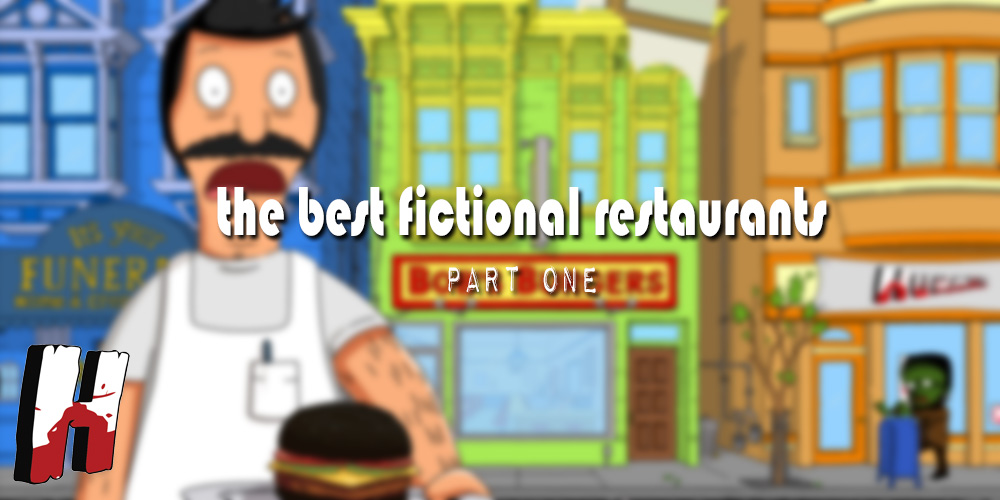 I eat a lot of food. I seek out the novel, the unique, and the unlikely. I am a cosmonaut exploring a wide galaxy of flavor, texture, and artificial food coloring. I long for the thrill of a new hamburger, I hunger for the excitement of limited edition cereal. These desires are frequently satisfied, but I find myself seeking out richer and darker thrills more and more frequently. This is why I searched Craigslist for a way to experience food that is outside the ordinary, a dark food opportunity. Craigslist delivered a method to do so, but at what cost? 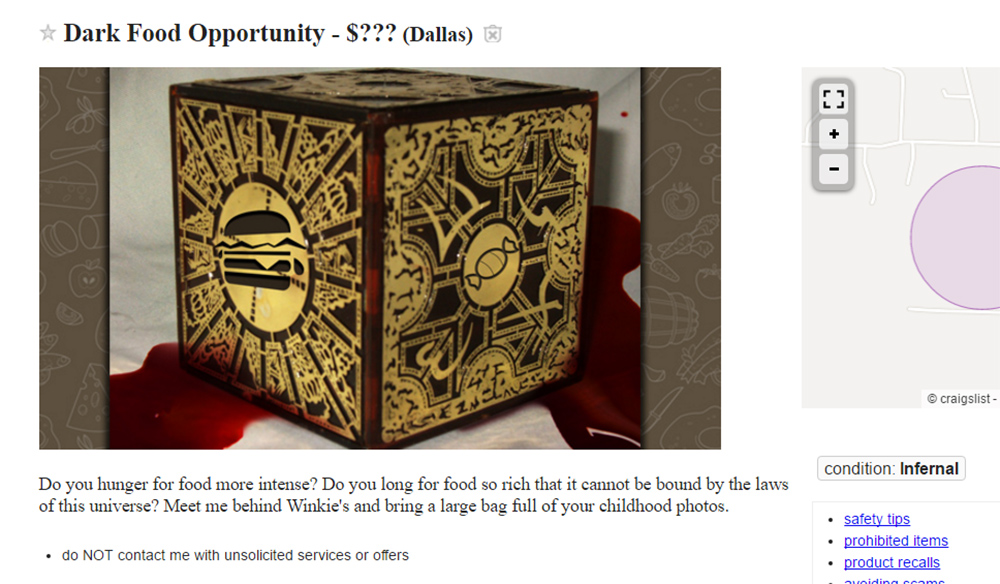 The seller indicated I needed to meet him behind Winkie’s. I had never encountered a Winkie’s restaurant in my life, but I wouldn’t let this deter me. Winkie’s sounded like Denny’s so I made a map of every Denny’s in the city of Dallas and systematically visited each of them with a large pillowcase stuffed with childhood photos in tow. On the 14th stop, I found him. This horrible, dark shell of a man. This…entity. It was as though the Grimace, beloved cartoon food mascot had been made corporeal and been through hell and back. The Not-Grimace squeaked ecstatically, gesturing at the pillow case. I handed it to him, somewhat reluctantly. A mix of ecstasy and revulsion washed over me as he handed me a different pillow case. Before I had time to look inside, the Not-Grimace had begun to eat my childhood photos in large handfuls. 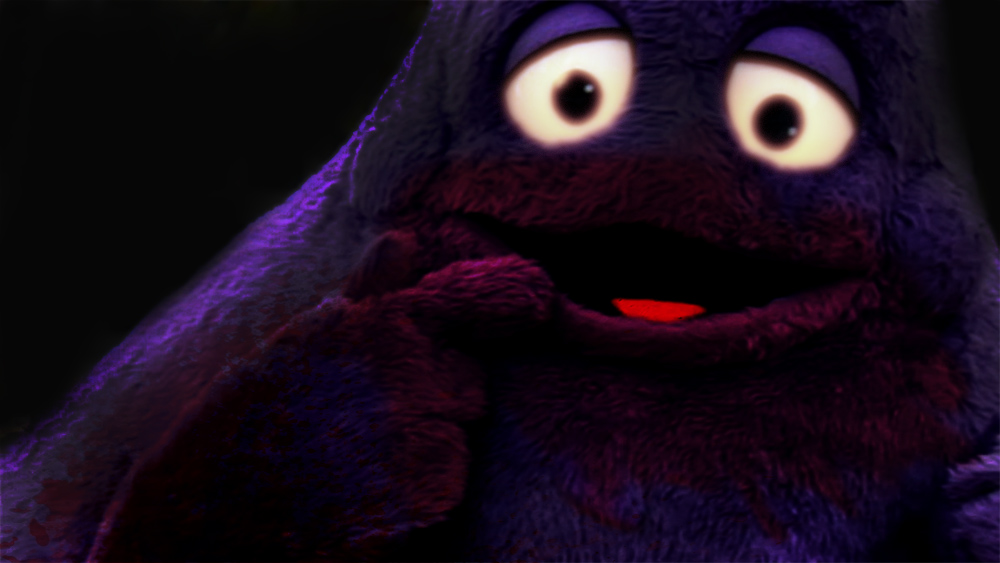 Artist’s depiction of the “Not-Grimace”

Upon returning to my car, a thirteen year old Honda Civic for inquiring minds, I opened the pillow case to find a puzzle box identical to the one in the Craigslist post and a helpful leaflet explaining what the box would do. Turns out this particular puzzle box is referred to as the Jughead Configuration and would grant the solver the ability to slip between universes at will. To target a universe one must simply think really hard about the universe you’d like to go to and solve the box. The leaflet indicated that in order to return to the universe of origin one must simply eat a “significant food” from the universe you landed in and use your greased fingers to close the puzzle box. With this godlike power now at my command I decided to set out to solve the box. My first trip would be a light one, to the fictional universe containing Ocean Avenue, home of Bob’s Burgers.

I sat in the parking lot of the Denny’s for days. Thankfully, as it was a Denny’s, there was ample food and drink to keep me alive. I connected to their WiFi from the car and placed to-go orders in order to keep my weak flesh alive. To keep my spirits bright I watched episode after episode of Bob’s Burgers on Netflix. 6 days later, the box was solved. I’d lost my job. My personal life was in shambles, but I was among the select few that had solved the Jughead Configuration. As I slid the final piece in place a feeling of elation washed over me.

Though it was nearly midnight in this world, I decided to stretch my tiny animated legs and see what wonders the Wonder Wharf boardwalk might have to offer a five foot tall Frankenstein monster once the sun goes down. As I stepped from my vehicle a flyer came hurdling towards me. Printed on fluorescent yellow paper, it was the flier depicted below. 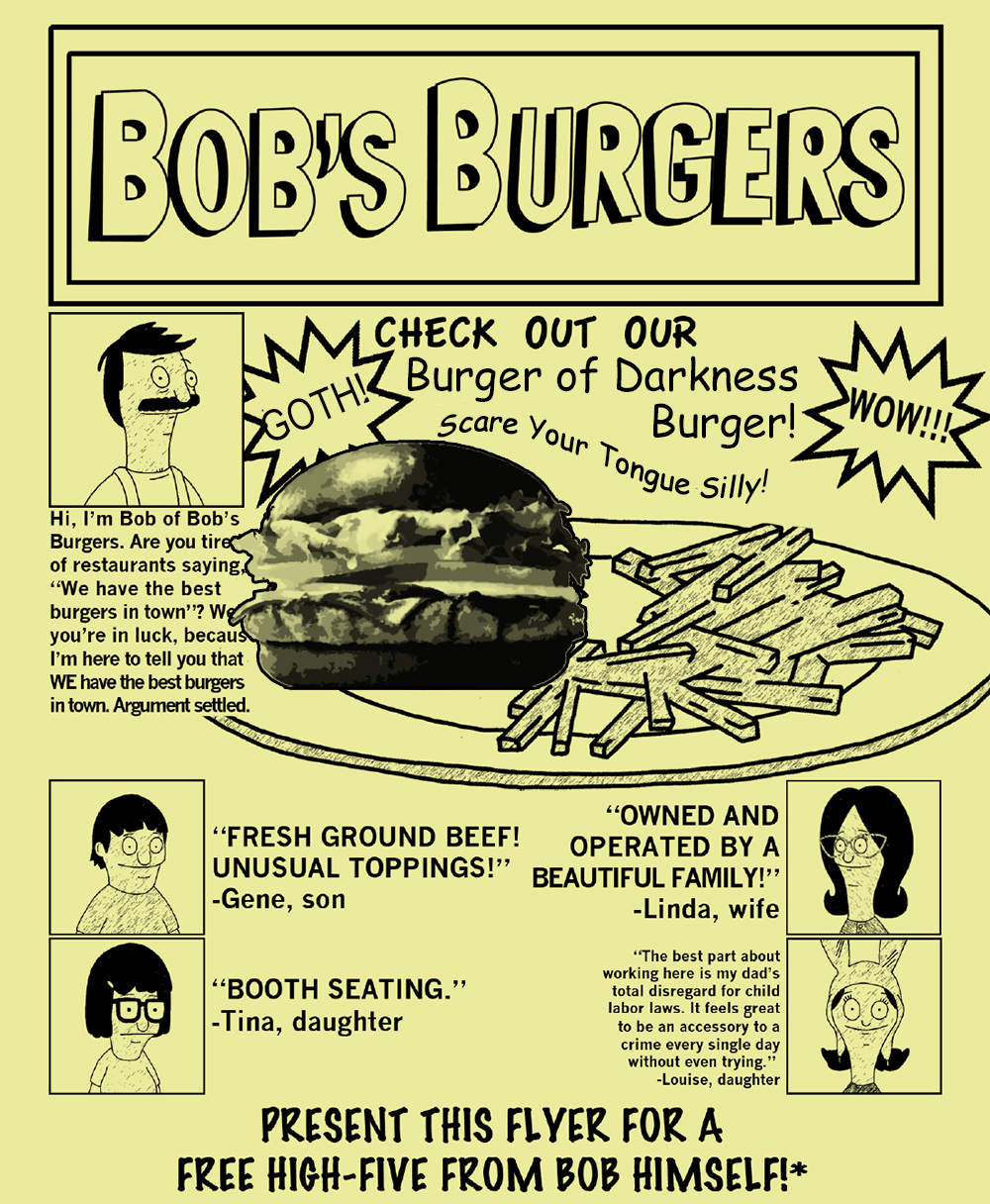 Could it be? Not only would I be sampling Bob’s Burgers in the morning, but perhaps Bob had crafted his world’s version of the Halloween Whopper? I could not contain my excitement. I rushed towards Bob’s Burgers, running full tilt into a portly man I later identified as Teddy. I knocked Teddy from his feet, his wool cap flying from his head. “Hey guy, what’re you do-,”, he muttered, brushing dust from himself and raising his eyes to mine. “I don’t. I don’t want any trouble mister“, he continued. I realized how horrible I must be to behold, how misshapen and dark, like a lollipop headed monstrosity wearing skintight jeans and a tiny blazer. “I’m sorry for hurting you. I just want a hamburger. I have nowhere to go.” Teddy looked down at me, his large childlike eyes filling with tears. “I know how that feels, buddy. One time Bob closed his hamburger restaurant for two days. Two days! Two whole days I couldn’t get a hamburger. Those were dark times, my tiny green friend. Dark times indeed. Bob doesn’t open back up for another 6 hours but until then you are more than welcome to stay with me. My apartment is small, I mean, real small, but you’re real small too so it should work.” With that, Teddy and I walked to his lime green pickup truck and made the short drive to Teddy’s walk-up. He offered me milk and cookies (which were subpar, but it’s the thought that counts) and allowed me to sleep on his couch. 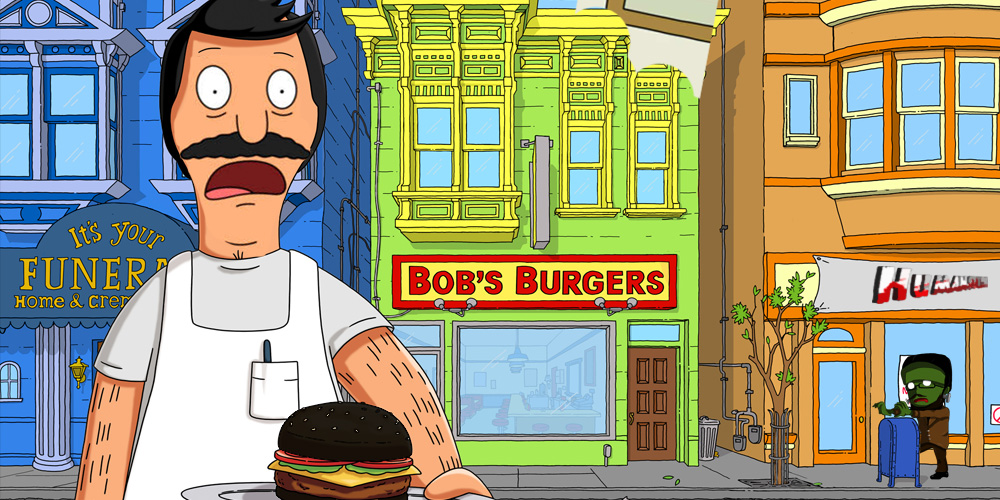 I was awakened at six fifteen in the morning, Teddy apparently had been awake for roughly 2 hours. “An early riser, you know, we get the most worms. Not that I eat worms. Not a fan of eating worms. Not anymore.”  He was heading to work, a carpenter by trade, and asked if he could drop me anywhere. I explained that if he could take me to my car, that would be fine and we were off. A short drive later, he had dropped me in front of my 2003 Honda Civic.  “I’ll be back for lunch. Say hi to Bob for me.” He puttered off, and I made my way down the street, passing pedicabs and rollerbladers, to the large glass window of Bob’s Burgers.

Though it was August in his world as it was mine, Bob’s Burgers was fully decorated for Halloween. Inside the window was an elaborate display of a stick figure family, the Belchers, all dressed as Ash from Army of Darkness. In Bob’s hands was a tiny book that appeared to be made from ground beef. As I leaned in close to the window a small monotone voice from behind me muttered, “The Burgernomicon.”

Startled, I fell forward suddenly, cracking the glass with my over sized and incredibly hard head. Whipping around I see the tiny face of Tina Belcher. “Why’d you break the window? Not that you did it on purpose. Are you here for the Burger of Darkness?” she asked. “I am truly sorry about the window. I will speak with your father about it once the restaurant is open. And yes, I am here for the Burger of Darkness. I am a friend of Teddy’s.”, I answer. She ushers me inside and I see Bob on the phone attempting to contact his landlord, Mr. Fischoeder about the window.

“Dad, Teddy’s friend broke the window.”, Tina explains. “I’d be more than happy to have it replaced.”, I elaborate. “It’s fine we’ve got an iron clad insurance policy on the window. My son Gene broke the window three times last month. You can cover the premium though.” “Of course. Are you open for business yet? I simply must try the Burger of Darkness.”

“Why is he green?”, a young girl with a rabbit eared hat, Louise, implores, bounding down the stairs into the restaurant. “He looks like a zombie.” Louise continued. “A zombie?! He’s perfect for my new rock opera adaptation of George Romero’s Day of the Dead!” a portly young man in a mustard yellow shirt, Gene, shouts as he tumbles down the stairs as well.

“I uh, I was in an accident a few years ago. Now I’m green.” I answer. “Gene, I have no desire to star in a rock opera, but I suspect my theatrical talents would land me the role of Bud, which I could live with.  About that hamburger?”

“How did you know my son’s name…?” Bob questions. Shit. Shit shit shit. I explain the whole situation at the counter. They take it surprisingly well. Linda comes along about halfway through the explanation with sodas and saltine crackers. “You mean my family’s wonderful enough to have its own tee-vee show?” she questioned. Bob seems more impressed with the idea that his burgers are a “significant food”. I explained that both points were true and that I would love to finally try the famed “Burger of Darkness”. 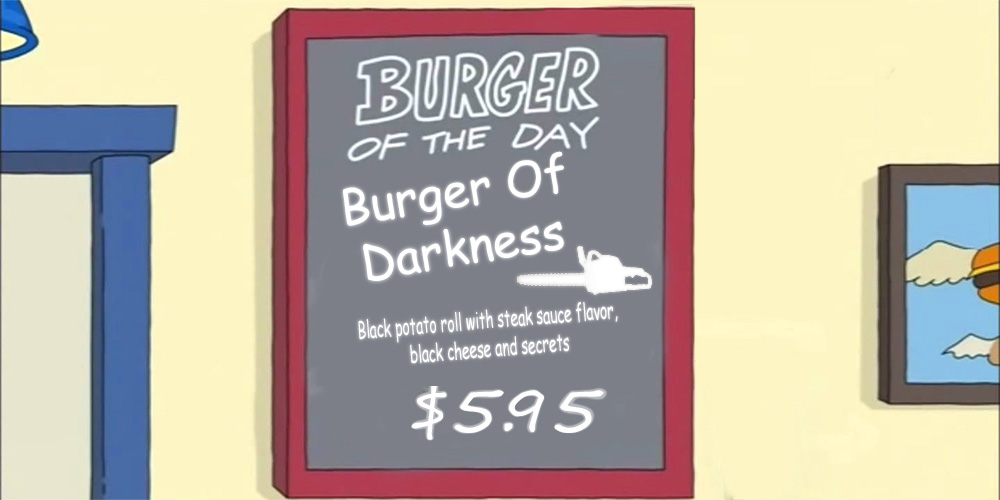 “Well, I guess it couldn’t hurt.”, said Bob as he retreated to the kitchen. Once Gene became aware I was a critic, he began to play me his rock opera. It was alright on its own merits, but for an eleven year old boy it was marvelous. Thirteen minutes later Bob returned from the back with a my hamburger.

The burger was arguably better than the Halloween Whopper, which feels like heresy but what can I say? A picture perfect potato bun, black as night, moist and flavorful, the steak sauce flavor oozing from the bun. A charcoal grilled Black Angus beef patty, cooked to medium rare perfection dripping with sizzling blood. The cheese, also black, was an umami combination of black pepper, American cheese, and harsh but flavorful notes of charcoal. This burger was a thing of beauty and tasted like it. I was thoroughly impressed. Having done the impossible and visited a world previously existing only in the minds of comedy writers, I suppose I should have expected nothing less. Bob had created a miraculous thing, the Halloween Whopper’s true heir, solely from his own ingenuity. He’d even managed to vaguely tie it into Army Of Darkness. This was the perfect hamburger. 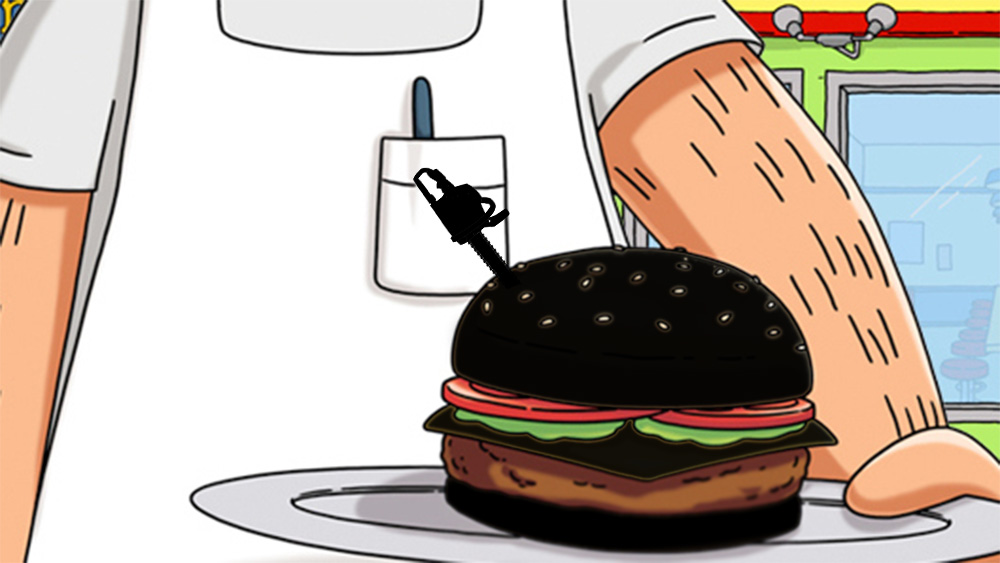 I expressed my undying affection and adulation. “Thank you. That’ll be $5.95.”, Bob responded as I snapped the puzzle box closed.

Black smoke poured from the box, as did a harsh blinding light. I could feel my body growing denser, transforming from two dimensions to three, elongating and stretching. My head felt to be shrinking, my limbs stretching and quivering and before I knew it I was standing nude in a Denny’s parking lot on the edge of Dallas. Looking around for something to hide my shame I became worried that my car would not follow me back to my world. Suddenly a huge shadow darkened the ground around me. I instinctivly rolled on the hot asphalt, scorching and scarring my pale flesh. The Civic had returned. I opened the door, trying to find some clothes. Sitting on the seat was a cassette tape. 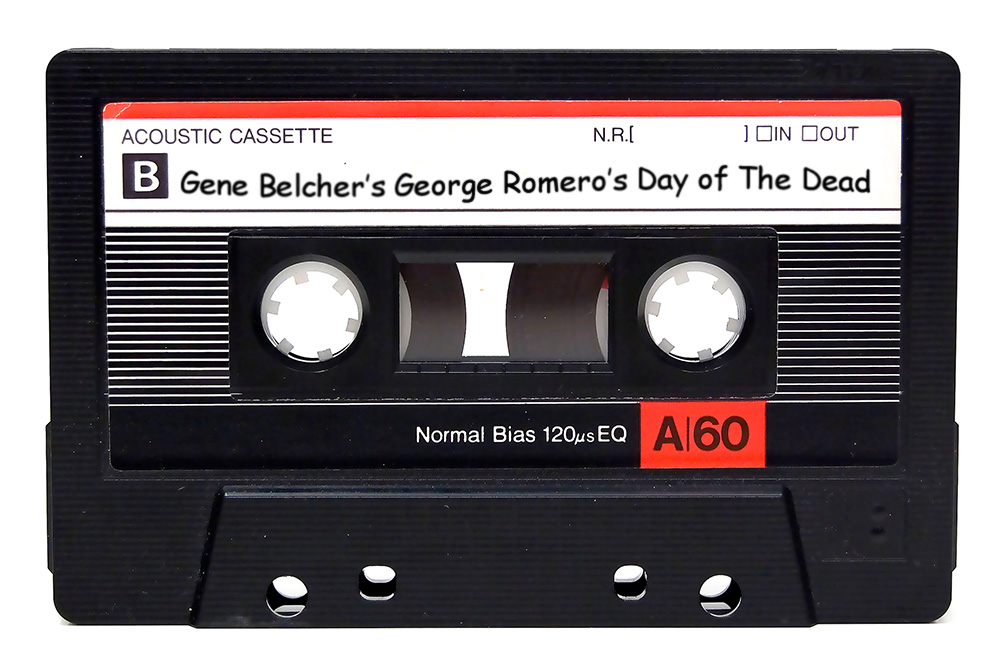