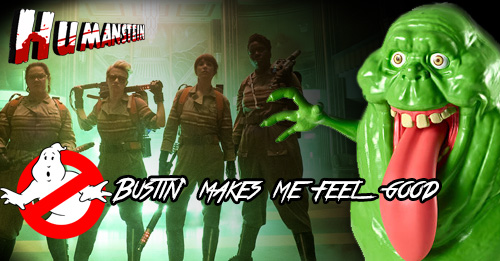 As I’m sure you know yesterday was Mother’s Day and being the dutiful and loving father and son that I am, I spent a sizable chunk of yesterday at Toys R Us looking for Ghostbusters toys.

I was actually on a (legitimate) Mother’s Day errand to pick up some last minute gifts for my girlfriend at Movie Trading Company (House and House II: The Second Story). Suspicious in its convenience, Toys R Us is right next door to Movie Trading Company. Then, I was (suddenly, of course) flooded with the realization that Ghostbusters toys are out in the wild at TRU. Then I (on the spur of the moment and with no prior planning) went inside to try and find them.

The sales staff composed of disaffected teenagers was not overly helpful when it came to guiding me to the Ghostbusters toys. In fact of the three employees I asked, two flatly said they didn’t know and the third directed me to Teenage Mutant Ninja Turtles toys. I love me some Turtles, but the name of the game on Mother’s Day was obviously Ghostbusters.

When I finally found them they were in fact nowhere near the TMNT toys but were in fact sandwiched between the Batman vs Superman toys and the WWE toys. I suppose this was the “These are for kids, asshole” section. 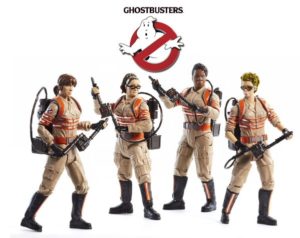 Someone stop me from spending $100 on these action figures.

TRU had a pretty solid selection of Ghostbusters toys, including 3 of the 4 new characters in the $20 Mattel figure format. Obviously the one that was missing was Holtzman because every dweeb on the internet has, like myself, decided she is the apple of our eye and assumes she is the star of the movie. 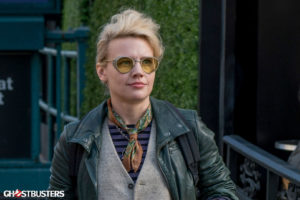 I think it’s because she looks like Egon from the Real Ghostbusters cartoon but a lady…?

Also sorely missing was the Slimer “Ecto Ghosts” squeeze ball that was in all honesty the reason I had bothered going into Toys R Us at all. 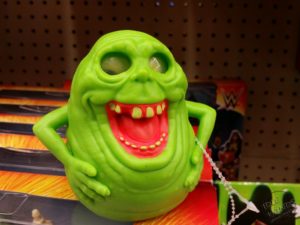 Photo credit goes to Idle Hands, because I couldn’t find the damn thing.

All that I found to indicate he had ever graced the aisle with his goopy goodness was two empty display boxes. I scrambled to look behind the displays and the surrounding boxes, thinking this might be the kind of thing a kid would pick up and put back in the wrong spot. What I found was this weird blue squirrel thing that I assume is in the new movie. 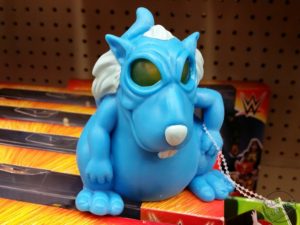 I picked him up, examining him, becoming more willing to settle for him by the second. I lovingly looked him square in the eyes, examining him, respecting him, goddammit, and I squeezed. And you know what this bastard did to me? He shot some nightmare concoction of sticky, salty water directly into my face. The universe had successfully punished me for looking at Ghostbusters toys on Mother’s Day.

I only ended up grabbing one toy, and it certainly wasn’t Blue Squirrel up there, oh no, it was… 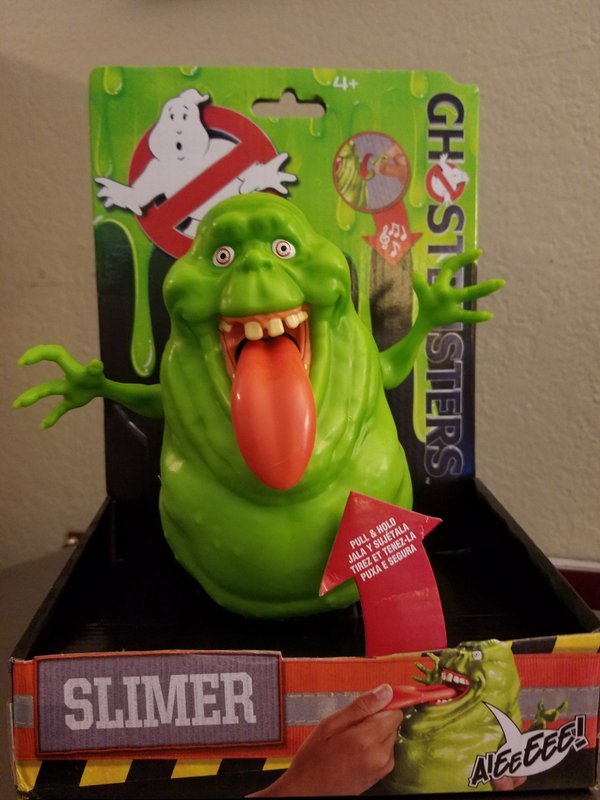 This action figure is deceptively simple, and a whole lot of fun. At first glance it appears to simply be a six inch chunk of rotund Day-Glo green plastic with the eyes of an old man and a tongue that is roughly 1/3 it’s height. And it is. But it is so much more than that, just like Slimer is so much more than a green ghost with self-control problems.

The figure is described as follows:

The beloved Ghostbusters films are supernatural comedies that focus on three eccentric parapsychologists in New York City who start a ghost-catching business. But the stories couldn’t exist without those wonderfully slimy ghosts-especially the infamous slippery, sloppy Slimer! He’s the most famous of the ghosts, and he’s back, nasty as ever. Pull his soft tongue and hear him scream louder and louder. Then let go of his tongue and hear him make a ghostly gargling noise. Slimer can stand on his own, and get this twist his arm, and you’ll hear the classic Ray Parker Junior Ghostbusters theme song! Slimer is a ghost, but detailed decos make him look oh-so real and alive. But then, you “ain’t afraid of no ghosts”!!

First, the nitty gritty. This figure is indeed 6 inches tall and massively out of scale with any of the figures released thus far, but that’s totally fine by me. Slimer is the star in the hearts and minds of many people who have just as much affection for the Real Ghostbusters animated series as they do the beloved 1980s horror comedies.

The fun part, beyond having a 6 inch Slimer figure, is that this little dude’s tongue stretches to a ludicrous degree and he makes a variety of different sounds depending on how you’re messing with him.

Namely, he screams in agony as you pull his tongue and gurgles once you release it, as seen below.

In addition to the screaming and gurgling, he also plays the Ray Parker Jr Ghostbusters theme when you push down his left arm, much like I do. It can be a true burden but if my left arm is pressed down I am compelled to sing the Ghostbusters theme. This is both my gift, and my curse.

Here’s Slimer doing it, which is decidedly more charming.

All in all, despite some confrontation, I’d say my Ghostbusters trip was a success. This little guy retails for $19.99, and while that may seem like a steep price to pay for a green jelly bean that screams at you, I was more than willing to pay it. I’m pretty damn thankful for this reboot if for no other reason than it’s maybe never been a better time to be a Ghostbusters fan. We’ve got so much on the shelves right now, and so much to look forward to. I’m pretty optimistic about the movie, but even if it flops you can go into any toy store and find some pretty neat Ghostbusters swag. And not only that, we’ve got ECTO-COOLER coming back! 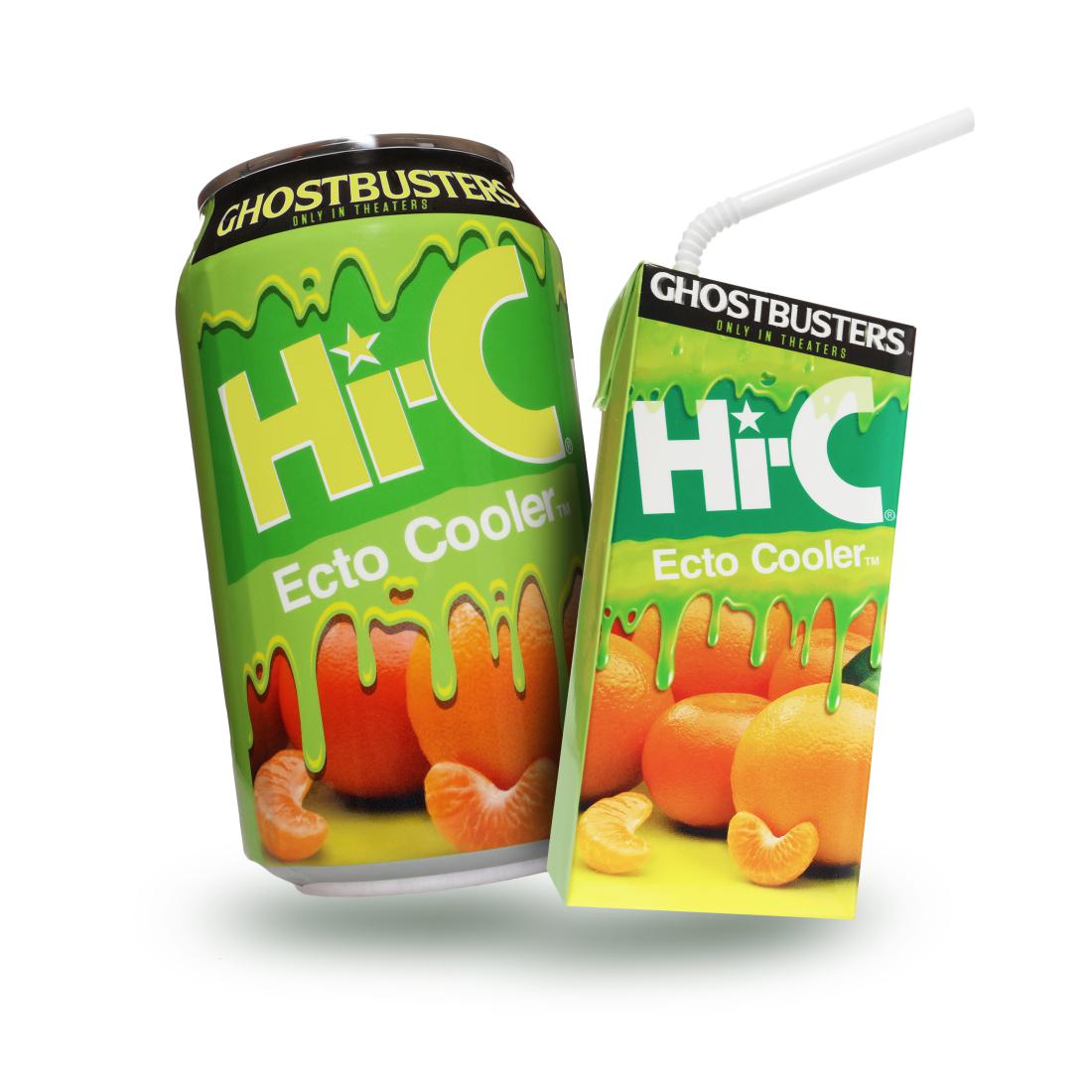 So the question becomes in a way, if not now, when? So yeah, I gladly threw down twenty dollars for this goofy little lump and I’m pretty happy I did. If you ask nicely, I might let you pull his tongue. I’m thoroughly excited about what we’ve got in store for this summer, and I’ll take every minute of Ghostbusters excitement I can get.

After all, bustin’ makes me feel good.