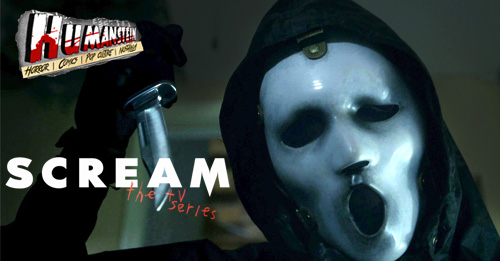 Way back in May of 2012, reports started coming through that MTV was in the early stages of developing a TV series based on Wes Craven’s seminal Scream and I was livid.

Scream was and is one of my favorite horror properties, and I think it’s more than fair to say that Wes Craven and the original Scream have done an awful lot for horror films, and horror fandom over the years. I’m not usually the guy that is primed to hate a remake or a reboot before seeing it, but hearing Scream and MTV in the same sentence was enough to get my blood a little hot. Based on the kind of shows I associated MTV has put out over the last handful of years, I didn’t faith in MTV’s ability to put out series that could live up to it’s name, yet alone one that could feature the fast wit, meta charm, and the slasher violence featured in the original Scream films. And come on, a slasher as a tv series? That could never work. 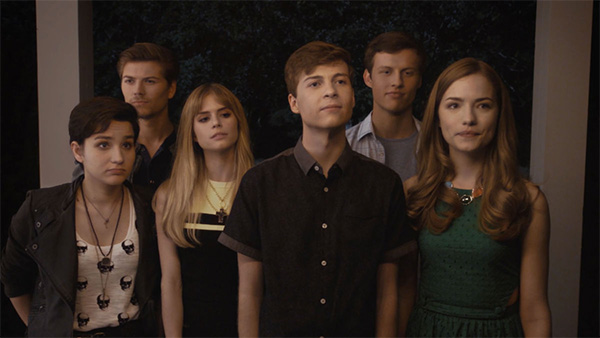 The kiddos. Well, most of the kiddos.

The MTV Scream show is not Scream 1-4.  It’s not a reboot, and it’s not a remake. It doesn’t try to be any of that. It’s another story, set in another town, and most importantly it’s a smart little TV show that takes your stock slasher characters and tries its hardest to breathe new life into them. It uses the original films more as a toolbox for tone, and for suspense, and then proceeds to blaze its own path as far as story is concerned. I honestly think this method of franchise continuation is one of the smartest moves in horror, and allowing your work some breathing room from the source material is probably the only way to have horror fans consider your work without directly comparing it to something that was good enough to be remade. Other successful remakes have done the same, notably 2013’s Evil Dead reboot. By distancing yourself enough from the source material and using the elements that appeal to you creatively, you have more freedom and if you push it out far enough you can probably save yourself some heartache and you can always hope it helps keep your Twitter mentions a little less hateful.

Like Evil Dead, Scream keeps a handful of the high notes and makes the source material work for it and not the other way around. Where Evil Dead pulls the Ash character out of the equation to distract you less, Scream does the same by reframing the infamous Ghostface mask as the mask of an abused teen killer by the name of Brandon James. Changing the mask was a contentious decision, and there was a pretty large backlash online when they did it. Many people felt that it couldn’t be Scream without Ghostface. And in a way I think that change was a very important, and quite possibly brilliant call. The new mask is more tied into the story, and it no longer plays with the “anyone could pick this up at a five and dime” angle, which is a pretty large change. Making this change, thankfully, doesn’t remove the high notes of the first Scream set the series up for, namely the idea that anyone could be the killer. 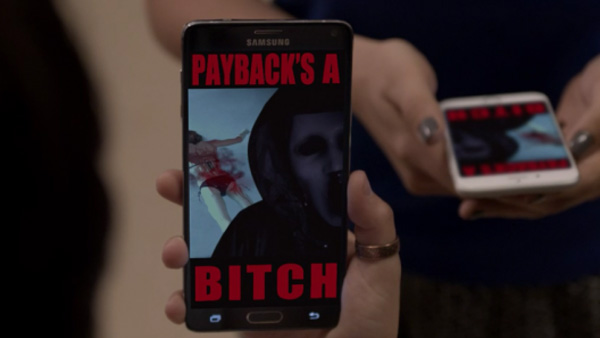 The show embraces modern technology in a more organic way than Scream 4 did.

If anything, MTV Scream amps up this suspicion and makes it even clearer than anyone could be the killer, or at the very least be hiding something dangerous. The way they’ve been able to reshape the traditional slasher story is directly tied into this. It refits the slasher mold to work for the type of story it wants to tell. No longer is every character reduced solely to one dimension, and their relationships are no longer simply scene setting for somebody to get their head cut off. Now, folks still get their heads cut off, but when it happens you actually feel it. And because this is Scream, they’re keenly aware that’s what they’re doing and they even go so far as to lampshade it.

My great affection and borderline evangelism for this show has not blinded me to its flaws. There are a handful of pacing issues and the characters occasionally make choices that are just so “dumb teenager in a horror movie” that they border on meta-commentary, but it doesn’t always come across as intentional. Again, to restate the thought at the beginning, this is not the original Scream. I have long stated that the first Scream film is the perfect slasher, arguably even the perfect horror movie, and as much as I love it, the show isn’t perfect. There are missteps, but I’m willing to chalk them up to growing pangs from a young cast and young creators and take the good with the bad.

When this show is good, it is very, very good. From a storytelling standpoint, the series is well structured and interesting enough to keep you along for the ride (especially if you’re watching on DVD without the interminably long MTV commercial breaks that stretch 40 minute episodes into an hour time slot). The mystery stays intriguing, and while watching it live we spent a good twenty to thirty minutes after each episode discussing the plot and who we think is implicated in the killings. Even now, knowing the season 1 reveals I find myself thoroughly enjoying the rewatch, and noticing even more character nuance. 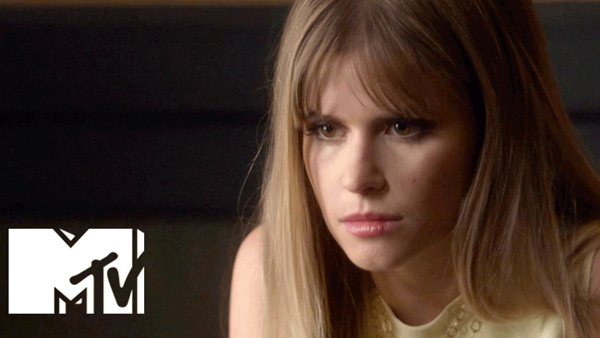 Speaking of character, there are true flashes of brilliance from just about everyone in the cast, and seemingly everyone does an excellent job with their material. I didn’t have too many moments of “Wow, they’re uh, they’re acting” like I tend to with slasher material of any kind. Willa Fitzgerald does an excellent job of playing a multi-faceted lead in the Sidney Prescott mold. Bex Taylor-Klaus and John Karna do a phenomenal job holding down the troubled teen and meta-motormouth fronts as Audrey and Noah, respectively. Every cast member does a great job of showing real character growth over the course of the 10 episode first season, but the star turn and the character arc that has the most depth, and the actor who gives the performance that carries the most gravity and grace has to be Carlson Young as Brooke. Initially just a simple “bitchy blonde” (her words, not mine), she wormed her way into both my girlfriends heart and mine as well through acting chops and strong character progression.

When the show teases you with lines like “You root for them, you love them, so when they are brutally murdered, it hurts.” early on, you suspect it won’t be true because, well, you’ve seen these characters before. They’re in every slasher you walked passed over at Blockbuster in 1999 while everyone was cashing in on the Scream franchises success. But they’re not wrong. You feel for these characters more and more as the show goes on, and each death hits you in the gut. The show is more violent and gory than one might expect from a basic cable show.

Taken as a whole, the first season of MTV Scream is a very enjoyable experience. The whodunit element is well done, and it never feels telegraphed. The character relationships are of varying strength, but the good ones are damn good. There are a few missteps in pacing in the middle, but the high intensity contained throughout the rest of the show more than makes up for it. As a horror story, it works, and it works well. The deaths have punch, and the kills have an intensity level that really surprised me considering it airs on basic cable. The blinder you go into this show, meaning the fewer spoilers you’ve picked up before watching, the better your experience will be. The mystery, the tension, the character building, and the surprisingly harsh violence are all very strong reasons to pick this show up on DVD or catch it streaming before the show returns on May 30th. 2016. 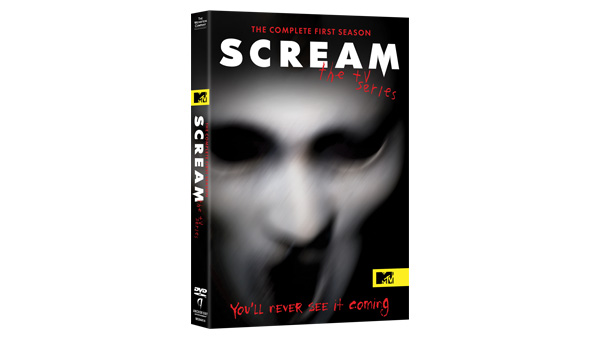 DVD Review: The first season of Scream is only available on DVD, it is not available on Blu-Ray. I was a little disappointed with that, but the picture quality is still pretty damn good and doesn’t harm the show at all. The nicest part of watching it on DVD has to be the lack of intrustive MTV pop-ups and overlays. Made it a much more cinematic experience, and helped elevate the show further.

Extras: As far as special features are concerned, this release is pretty slim. There’s just a gag reel and a handful of deleted scenes. I’m fine with that. I would have preferred a little making of featurette or maybe some interviews with the cast and crew, but for the $20 price point, I’ll live. I’m paying $2 an episode, and that works out for me.

Verdict: If you like Scream, do yourself a favor and give this show a watch. It’s not perfect, and it’s not the original Scream film, but on it’s own merits its a damn enjoyable show packed with fun, some fun scares, and beautiful young people running for their lives. It works as a slasher, and it works as a TV show. So don’t be an old fuddyduddy and give it a shot, you grouch.

Bonus: Heres my girlfriend and I with Bex Taylor-Klaus and Carlson Young at the Texas Frightmare Weekend in 2016. Very nice folks, and some very strong reasons to give this show a go. 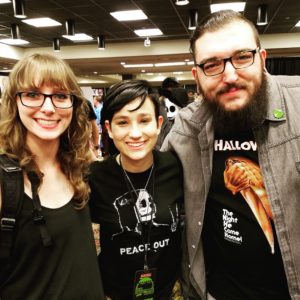 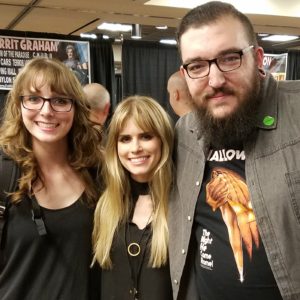