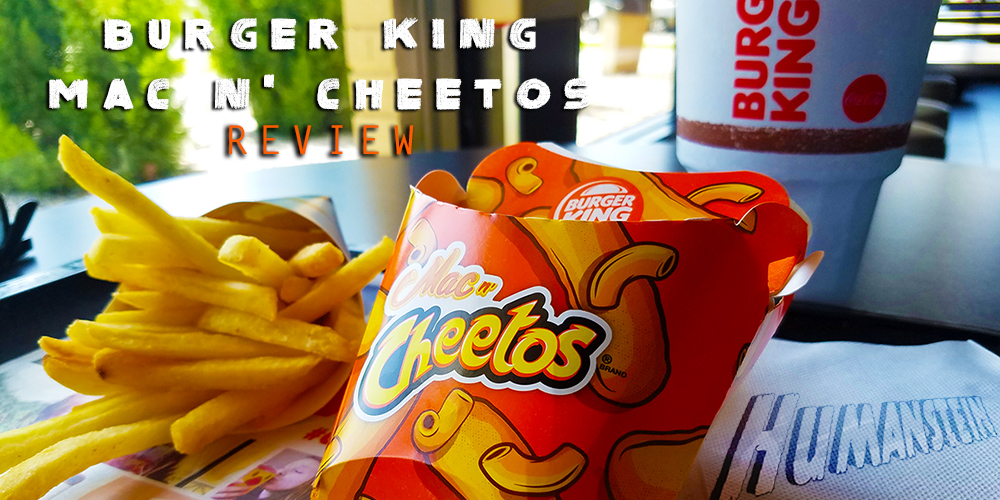 When word broke about Burger King’s Mac N’ Cheetos in late June there was panic. Chaos. Violence in the streets. Er, in the tweets. People were repulsed. Obesity in America was decried. People just generally got their dander up because somebody was going to fry some macaroni. Those people are spoilsports, fuddyduddies and losers. 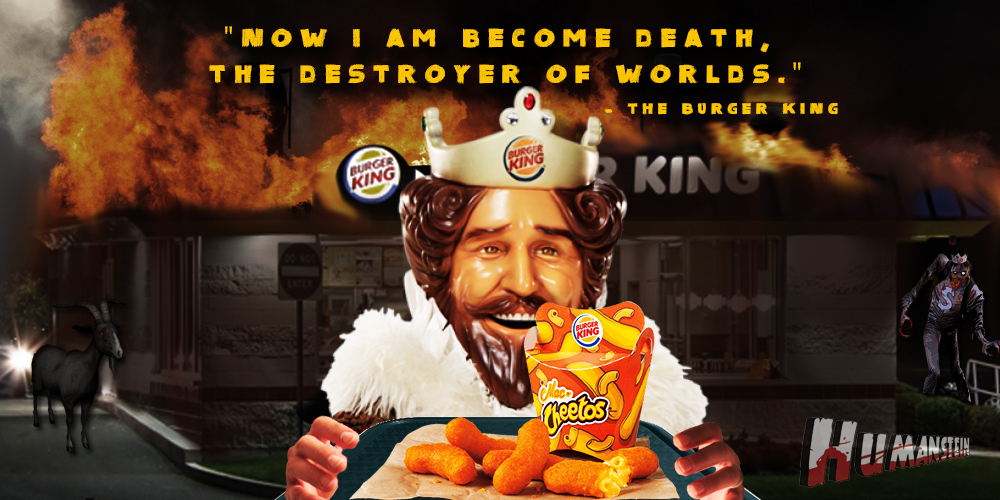 I think Kotaku was the first to break the news and oh boy was there snark. The snark hasn’t stopped, and though Kotaku later ended up seeming pretty satisfied with their Mac N’ Cheetos I’ve been disappointed that the overwhelming majority of reviews and reports I’m seeming seem to hate them. It was enough to harsh some of the enthusiasm I was feeling, and I’m gonna level with you, I was pretty enthused. After finally getting my hands on these macaroni abominations, I’m here to say you can go ahead and ignore those folks. They couldn’t be more wrong. These things are dope.

When my friends and I rolled into the Burger King for lunch today, we were immediately a bit shocked by how fancy Burger King has gotten lately. I normally indulge my Burger King desires by way of the drive through, but inside they’ve updated with industrial style walls and flooring, well-orchestrated color schemes, and neat little tables that provided the perfect food blog photographing opportunities. They even had nice ambient lighting, folks. They’ve definitely upped their interior design game, but that’s not the point. It is nice that they’ve done a good job of giving you a safe place to order their unique menu items though.

I’ve always been a staunch defender of Burger King, namely because they’re the only fast food burger joint that still seems concerned with the dying idea that fast food be something fun. Fast food’s not an all the time kind of food, and we all know it’s unhealthy, so why the hell shouldn’t it be fun? Most places just seem concerned with having the bigger burger, or the burger with the more convoluted ingredients topping it. Leave that for the regular restaurants, y’all. You’re fast food. Fast food doesn’t need pretense. What fast food needs, frankly, is weird-ass macaroni tubes shaped into Cheetos, deep fried, and then rolled in a little bit of Cheetos dust and god damn it, Burger King has delivered. 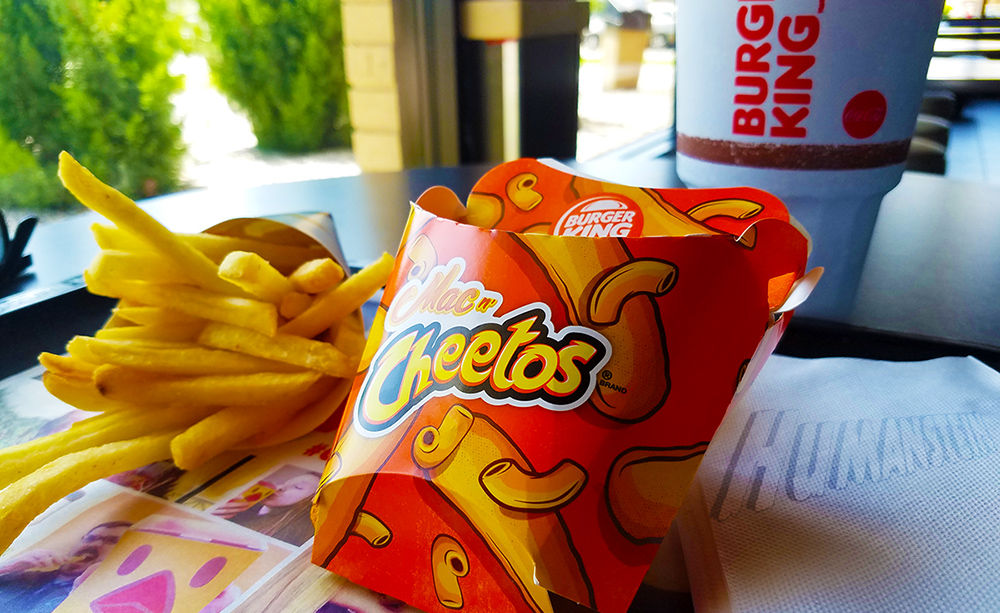 I ordered my Mac N’ Cheetos, which the cashier adorably referred to as Macaroni Cheesers, and waited with bated breath. I also ordered a Jr. Stacker combo, with fries and a soda. Burger Kings around the country proudly come equipped with Coca-Cola Freestyle machines but I figured one combination of things that shouldn’t exist is enough for one meal, so I just got a Dr. Pepper. I was presented with my Mac N’ Cheetos and the rest of my meal and we made our way to one of the aforementioned neat little roundtables, the one surrounded with the best ambient light for the ideal junk food porn photos. 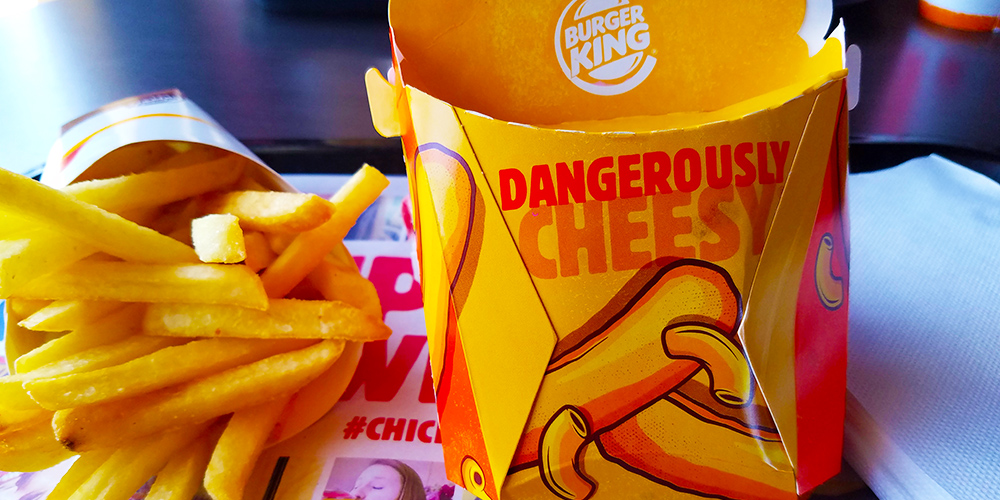 The first thing I noticed was how Burger King definitely wants these to feel special. Just like how they take their Chicken Fries packaging seriously, they want you to know you’re not eating some humdrum run of the mill junk food here, no sir, you’re eating Mac N’ Cheetos. The box reminds me of the Happy Meal box before it got unsettling human eyes and a tongue. 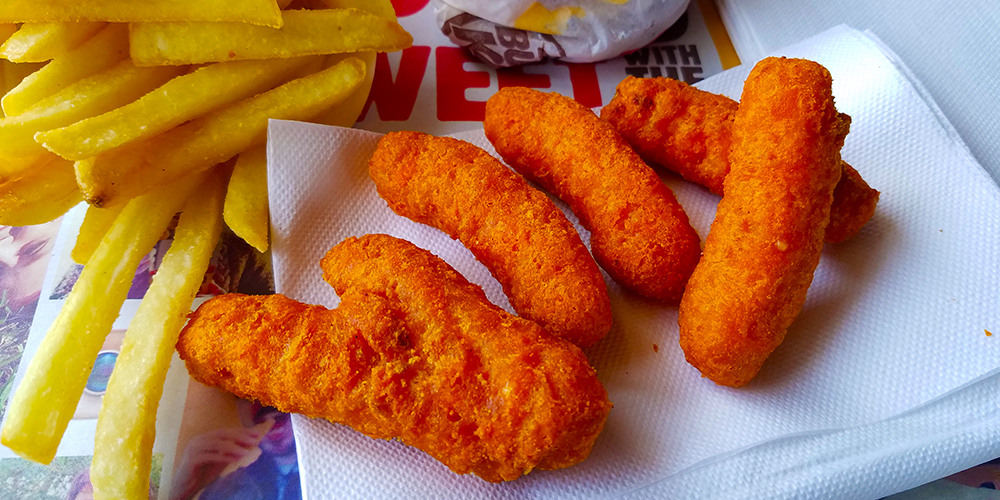 Opening the box, I found 5 Mac N’ Cheetos as advertised, though one of them was a conjoined twin that I set aside for a special purpose (I’ll discuss this later). Immediately I’m a bit taken aback a bit by how different they look than their profile pic. That’s alright though, very little in the junk food world resembles the carefully preened versions presented in advertising. The major difference is they look a bit less like Cheetos and a bit more like cheese sticks. They still look pretty appetizing, especially when stacked up with how un-photogenic a lot of fast food stuff ends up being in the cold light of reality.

Biting into the Cheetos crust, I note that it’s a bit less crispy than I was expecting. Don’t get me wrong though, they’re still nice and crispy on the outside. The texture of the dough is somewhere between a Cheetos puff and a fried mozzarella stick, which I suppose is exactly what I should have been expecting. The dough does have a faint Cheetos flavor to it, akin to the level of Doritos flavor you get off a Doritos Locos taco from Taco Bell. Any more Cheetle (the technical name for the Cheetos dust) and it might have been overpowering. 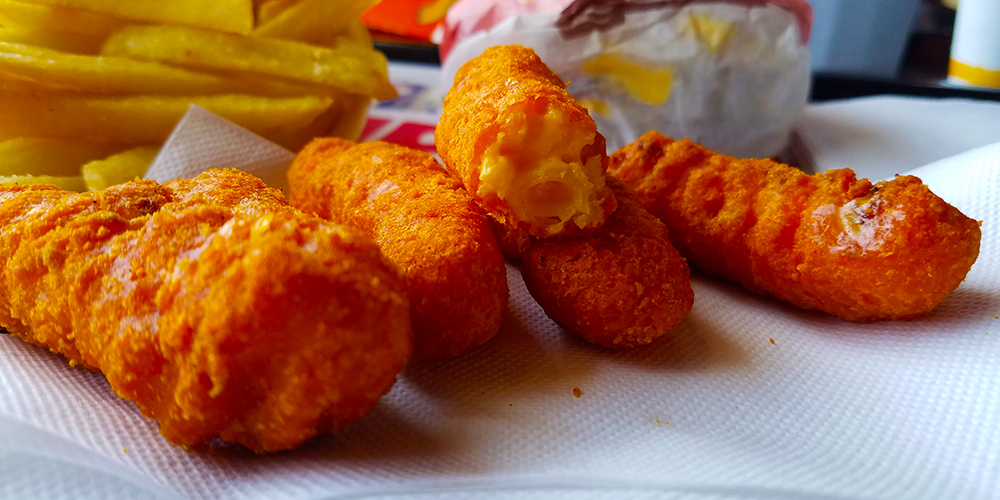 The macaroni inside is soft and provides a solid contrast with the crisp exterior and packs a nice, cheesy flavor that’s closer to Kraft Macaroni and Cheese than I would have thought possible in fried form. The macaroni is traditional elbow shaped, and I’m honestly pretty impressed by the stark contrast between the exterior crispiness and the interior creamy softness. The macaroni is the real star of the show here, and it’s as solid as you’d hope.

All in all, these are a success. I’m going to go ahead and chock the somewhat wanting crispiness on the outside to these being a new product and expect the exterior texture will probably vary a bit from location to location and fry cook to fry cook. One note though is that these puppies are rich. Incredibly so. If you’re not as much of a glutton for fried food as I am, I’d advise that you split an order of these with a friend.

Now, for that special purpose I mentioned saving Frankencheeto, the monstrous conjoined Mac N’ Cheeto for…

The little container is resealable. I’ve got to assume that’s an intentional decision, probably because these are so rich that human beings that aren’t as tolerant of fried cheese and grease wouldn’t be able to finish an order of these by themselves in one go. So, I saved one to reheat later and see how they hold up.

They hold up about as well as one could possibly expect, is the answer. The texture is a bit worse for wear having sat in a fridge or a good 6 hours or so, but the flavor is still pretty good. An interesting note is that if anything the Cheetos flavor is stronger this go around. I’d advise the splitting method because though they’re okay reheated, they’re definitely better right out of the fryer.

Verdict: Buy ‘em. If they sounded good to you when you heard about them, you’ll like them. If they didn’t, you’re lame but I understand. You should buy them anyway, as they’re less Cheetos and more just fried macaroni and cheese. How often does something like this really come around via a nationwide fast food chain? Mac N’ Cheetos are available through the end of August or while supplies last and for the retail price of $2.49 , I reckon you can gamble a little and come away with a fond weird food memory of summer 2016.