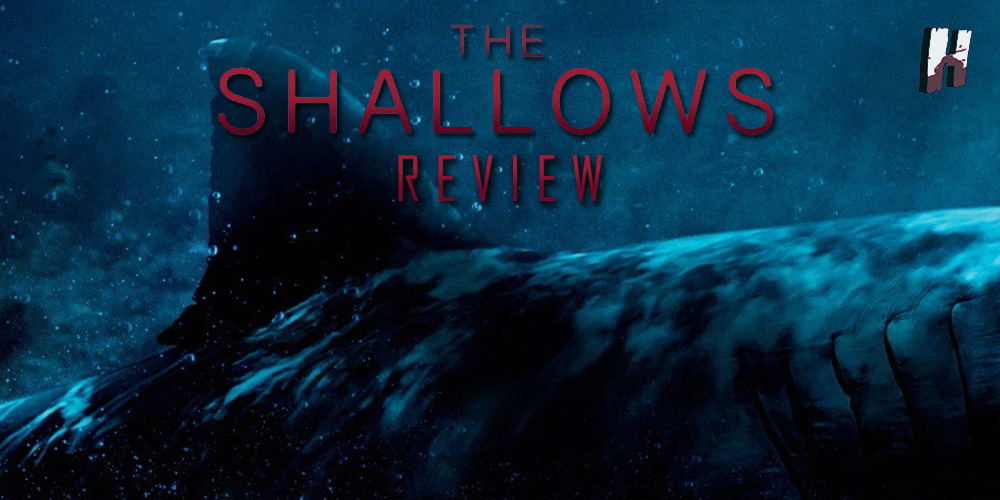 “What was once in the deep is now in the shallows.”

I’ve got a confession to make: I watch a lot of shark movies. I’m a big fan of sharks both fictional and real. I like the idea that there are these powerful, incredibly strong beings in our world that border on the monstrous. I like the tension inherent in a shark movie. The low grade dread that crawls up the audience’s spine and the special way the water churns as the dorsal fin slowly moves towards the shark’s unsuspecting prey. The panic that releases that tension when the characters become as clued in as we are. I like shark movies. It’s been a little while (about five years) since someone has made a honest to goodness shark movie that isn’t a tongue in cheek schlock fest, so when I became aware of The Shallows my interest was piqued pretty quickly.

When I saw the first trailer (above) for The Shallows back in March, I was hooked. In 90 seconds, the trailer gives you what you need to know if you want to see this film. That’s a trailer’s job. It’s supposed to grab you and leave you wanting much, much more. In case of this film’s first trailer it graciously leaves you wanting a lot more. All you get is that there’s a woman, Blake Lively, and she’s in a bad spot. A massive great white is circling her as she nurses a wound on a rock. She’s screaming for help, and she looks to the white sandy beach and realizes it isn’t coming.

I wanted to see that movie. Thankfully, in the end I did but not before I saw a bit too much of it in the second trailer. A good 60% of the films’ beats were present in the much too long second trailer, which I will not be including in this review due to my dissatisfaction with the amount of tension it spoils.

Divorcing the film from its trailers, The Shallows is a finely made film that packs tension, excitement, a handful of good scares and some truly wince inducing moments into it’s 87 minutes. Helmed by Jaume Collet-Serra (House of Wax, Orphan) and written by Anthony Jaswinski (Kristy) the film follows a young med student named Nancy who’s recently lost her mother as she travels to a secluded beach for a little sun and surf. The real reason for the trip happens to be that her mother surfed at when she found out she was pregnant with her and Nancy’s looking for something to connect her to her mother following her death following a long battle with an unnamed disease.

I really liked this movie, but it isn’t perfect. After all, no shark movie is perfect except for Jaws. There are stumbling blocks, but thankfully all of my qualms with the film actually come in the first 30 minutes. Much of the aforementioned backstory is fleshed out through slightly distracting CGI Instagram feeds and Facetime calls with her sister and father back in an idealized version of Galveston, TX that doesn’t look very much like Galveston at all. While the BBC Sherlock style Instagram feed, text messages, and giant talking head Facetime bubbles serve and succeed to move the narrative forward and provide much of the emotional backbone they also managed to take me out of the film and it honestly took me a little while to get reinvested.

When I became reinvested though, the film didn’t let up. Once she’s in the water, the simple premise is allowed to shine by sledgehammer intense directing and pacing. Nancy’s surfing alone and comes across a fresh kill. Backing away from the bloody carcass, Nancy gets dragged underwater by a great white shark. Now she has to fight. There are no b-plots. There are no extra characters to deal with. We’re left with Nancy in the ocean as she struggles to survive just off the shore of paradise.

The tone and pacing of the film are pitch-perfect. Collet-Serra crafts an intense feeling of isolation that really allows the audience to feel Nancy’s isolation the gravity of her situation. Her friend isn’t coming for her. The other surfers have left the beach. Whenever anything might come along and save her, you feel her excitement and fear, but you know they won’t save her. Nancy is alone. Well, except for the shark. 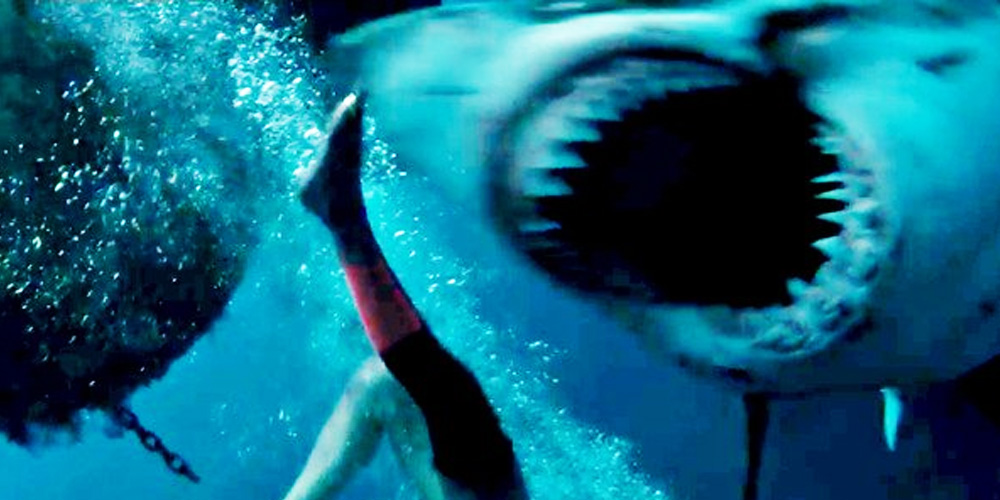 Speaking of the shark, it’s a borderline truism that the strength of a creature feature has a lot to do with how real and how menacing the monster feels. It’s important in a shark movie that the shark looks and feels real and whatever technical missteps might exist elsewhere in the film (I’m lookin’ at you, Awkwardly-CGI’d-Blake-Lively-Face-On-A-Professional-Surfer’s-Body) it certainly succeeds in that regard. The shark, who I am nicknaming Freddy, feels as real as any shark inside my TV during Shark Week and terrorizes Nancy in a series of well-crafted shocks and I don’t feel any uncertainty placing it well within the realm of the famous Bruce from Jaws. This is a scary, powerful shark.

For a movie about a bigass shark trying to eat the pretty blonde girl, The Shallows has heart in all the right places. The human element is never removed from the story and you grow to care for Nancy and Lively’s performance is stellar. You feel her agony, you feel her pain, and you feel the intense strain of the situation as she must decide how much fight she has in her. Most importantly in a genre film, you want to see her succeed. You want her to find the will to beat this damned shark. Due to the film’s focus on her isolation the film’s success hinges on Lively’s performance and she absolutely nails it. 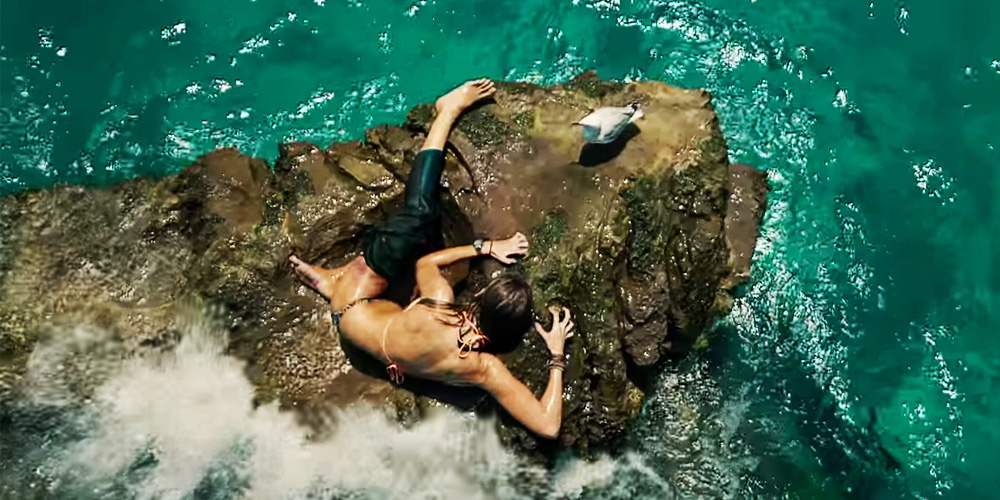 I may have lied a little bit earlier. There is a secondary character, and that secondary character is great. It’s a seagull that lovingly gets nicknamed (and credited!) as Steven Seagull. The (I know this sounds ludicrous) emotionally affecting relationship that Lively’s character builds with this bird speaks volumes about the human element Collet-Serra and Lively are able to cultivate in a film that could easily just be “shark scares blonde”. I’m by no means saying Collet-Serra was trying to make high art here, he almost certainly wasn’t. What he was trying to make was a well-crafted summer B-movie with heart, some great scares, and a killer shark. He succeeded in spades.

A few technical problems aside, The Shallows is a well put together summer horror film that has earned it’s spot in the sharksploitation hall of fame. I’d honestly go so far as to say this is the third best shark film ever made after the first two Jaws entries. I know, I know, that’s high praise but I truly feel like The Shallows deserves it.

The film showcases how well Collet-Serra can play with your expectations and immediately twist them. The performance from Lively is honestly her best, and the cinematography is lush and beautiful. I can heartily recommend this film and encourage you to try to catch it in theaters in order to take in the beautiful sights and hear the wincing of your fellow moviegoers as the carnage unfolds.