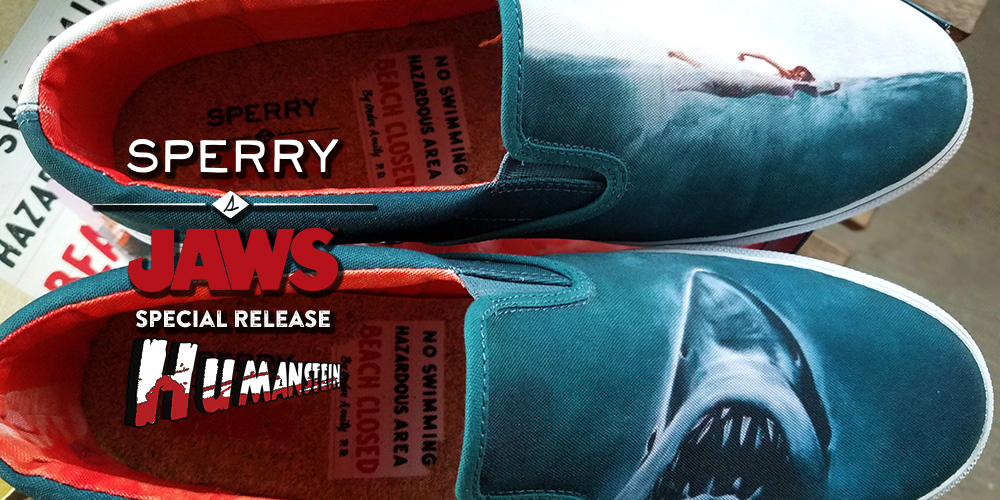 The kings of preppy footwear have teamed up with the king of shark movies, Jaws, this summer to produce a line of high quality nautical terror themed shoes. Jaws is unquestionably my favorite shark movie, and it’s honestly pretty damn high on my list of all time favorite films horror or not, so these beautiful, ridiculous shoes immediately earned themselves a spot in my admittedly limited summer wardrobe.

The line contains a couple of different shoes for both men and women, but the star of the show in my book is the Striper Slip On. Sperry’s description is below.

Attack your next voyage in the Striper S/O, printed in tribute to all tales of the sea, terrifying or otherwise. A classic silhouette with vulcanized construction and breathable canvas uppers, these will keep you looking sharp. Like, shark teeth sharp.

I’m going to be honest with you, Sperry shoes are not my thing. I’m not a preppy guy in the slightest, and even less so a boat shoe guy, but Sperry has always had a reputation for attention to detail and quality and these Jaws shoes are no exception. Every detail is lovingly crafted, including every detail of the packaging. 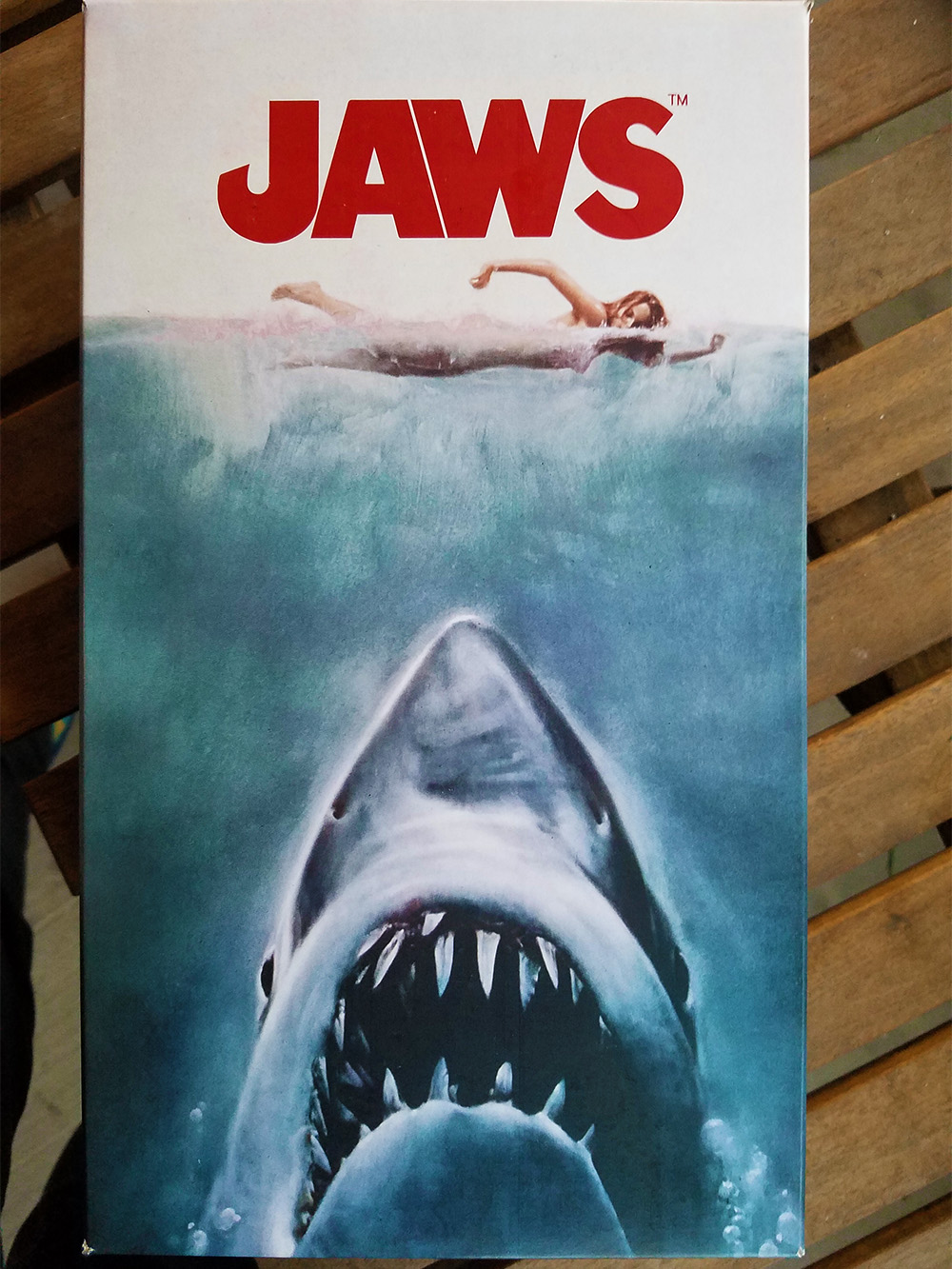 Top of the Jaws X Sperry Striper Slip On box.

The top of the box beautifully recreates Roger Kastel’s gorgeous and iconic poster for the film down to the brush strokes. I recently learned that the original painting has been missing since roughly the time of the film’s original release, and that breaks my heart. Luckily, I’ve got this elaborately crafted shoe box to cheer me up. 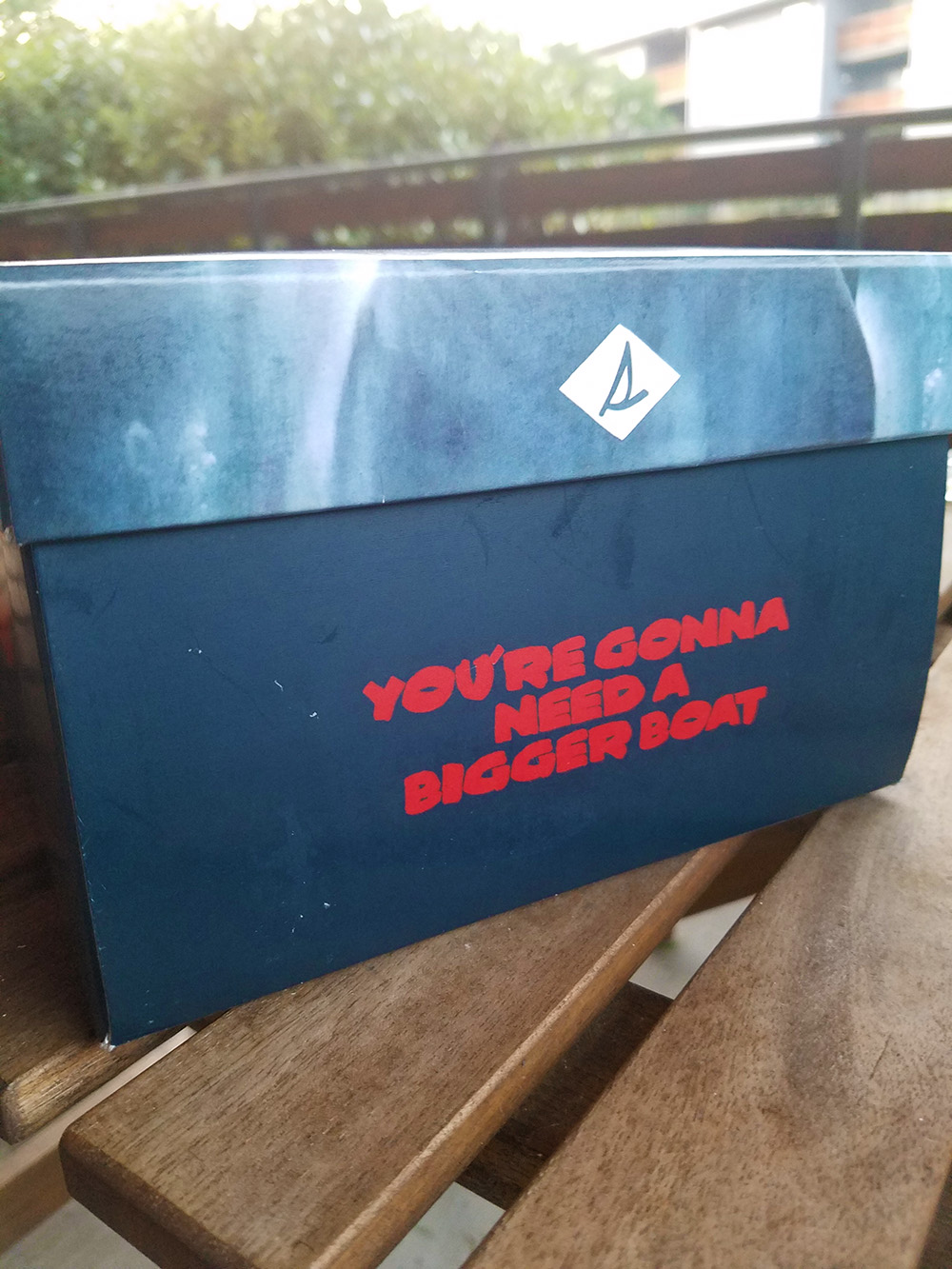 The back of the box, ie the side not featuring the shoe size and stocking information features Brody and the film’s most famous line, “You’re Gonna Need A Bigger Boat”. The details throughout the packaging here are pretty stellar and I applaud Sperry for giving me plenty of bang for my buck before I’ve even got the shoes out of the package. 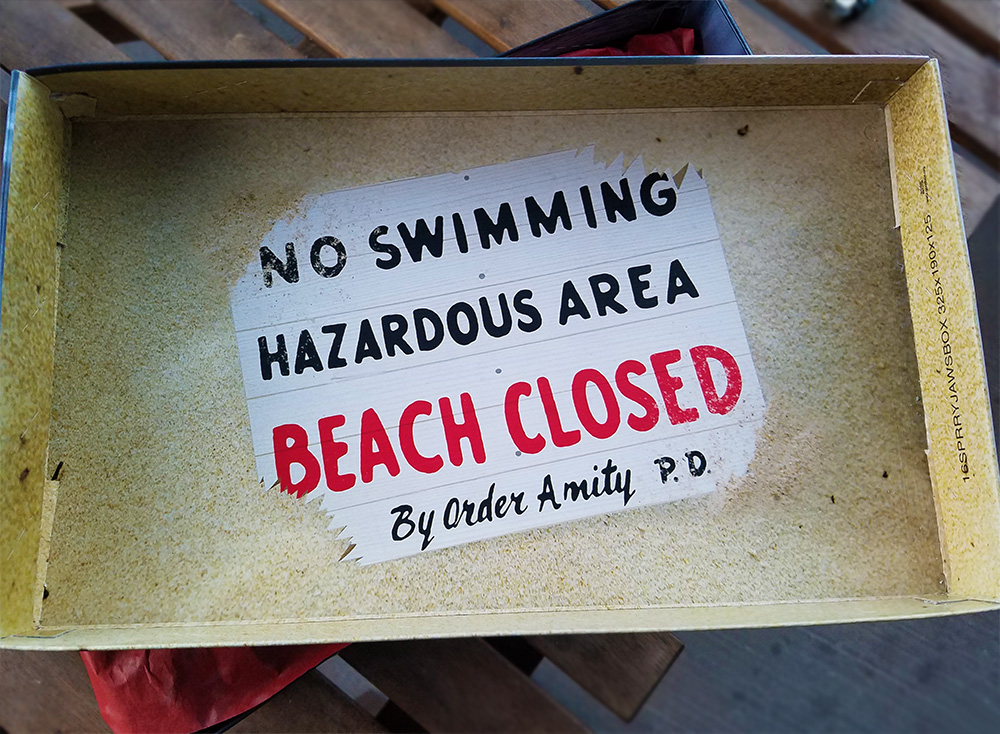 The inside of the Sperry X Jaws shoe box.

Opening the box, I’m greeted by a cheery warning from the Amity Police Department, helpfully informing me that there is No Swimming and that the beach is closed, which most Jaws fans can readily place as the exact sign they put up in the film. Again, it’s the little touches that really sell how special these shoes are.

The “No Swimming / Hazardous Area / Beach Closed / By order Amity P.D” sign as depicted in the film. 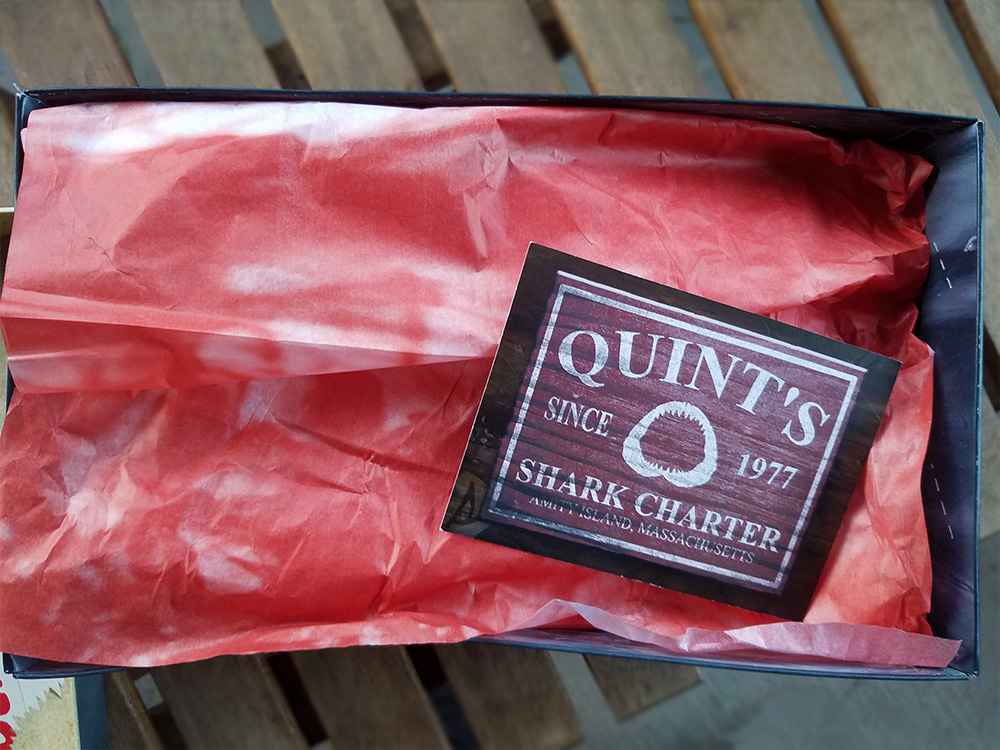 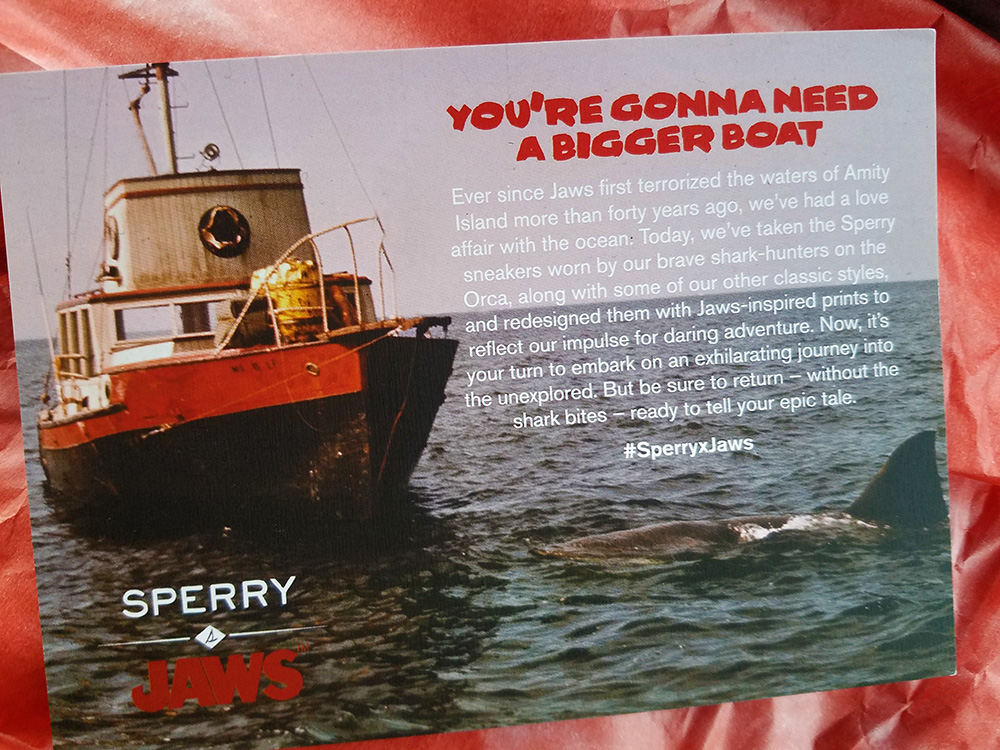 Reverse side of the Quint’s Shark Charter card, featuring information about the #SperryxJaws promotion

Setting aside the snazzy box lid, I find some bloody tissue paper and a Quint’s Shark Charter card with well done wood detailing. Flipping that card over, we find a picture of Quint’s ship, The Orca as well as the fin of our giant mouthed friend Bruce the Shark. The card contains promotional information regarding the collection and its inspiration. The text of the card is below for ease of reading.

Ever since Jaws first terrorized the waters of Amity Island more than forty years ago, we’ve had a love affair with the ocean. Today, we’ve taken the Sperry sneakers worn by our brave shark-hunters on the Orca, along with some of our other classic syles, and redesigned them with Jaws-inspired prints to reflect our impulse for daring adventure. Now it’s your turn to embark on an exhilarating journey into the unexplored. But be sure to return – without the shark bites – ready to tell your epic tale.

That’s a pretty big mouthful to say, yo, we took some Sperry shoes and we stuck some sharks on ’em cuz it’s dope, but I once again appreciate the efforts Sperry and the licensing team have gone through to give this release a luxe quality and a bit of a narrative. 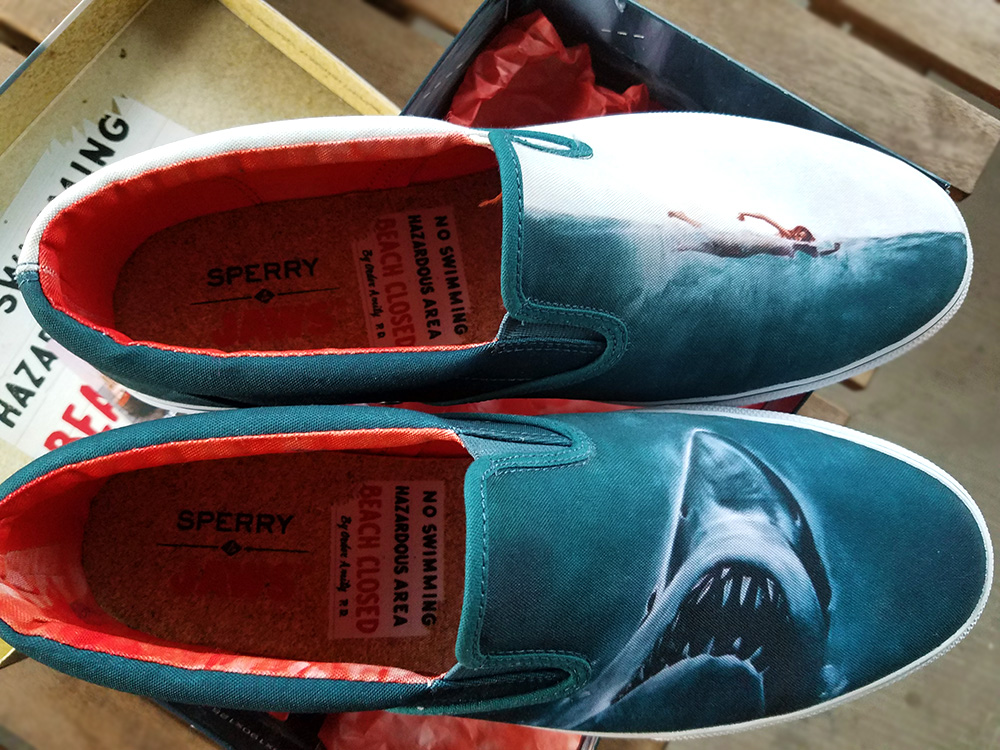 As you can see, the Sperry x Jaws Striper slip on is thankfully as carefully crafted and as packed with details as the packaging would lead you to hope. The vamp features a stunning recreation of Roger Kastel’s famous poster, with the woman being placed on the left shoe and Bruce/Jaws being placed on the right. The colors are crisp and strong. After these photos were taken I took the extra precaution of Scotchgarding the everloving shit of them to prevent damage to the beautiful artwork that graces the outside and wraps the entire shoe. 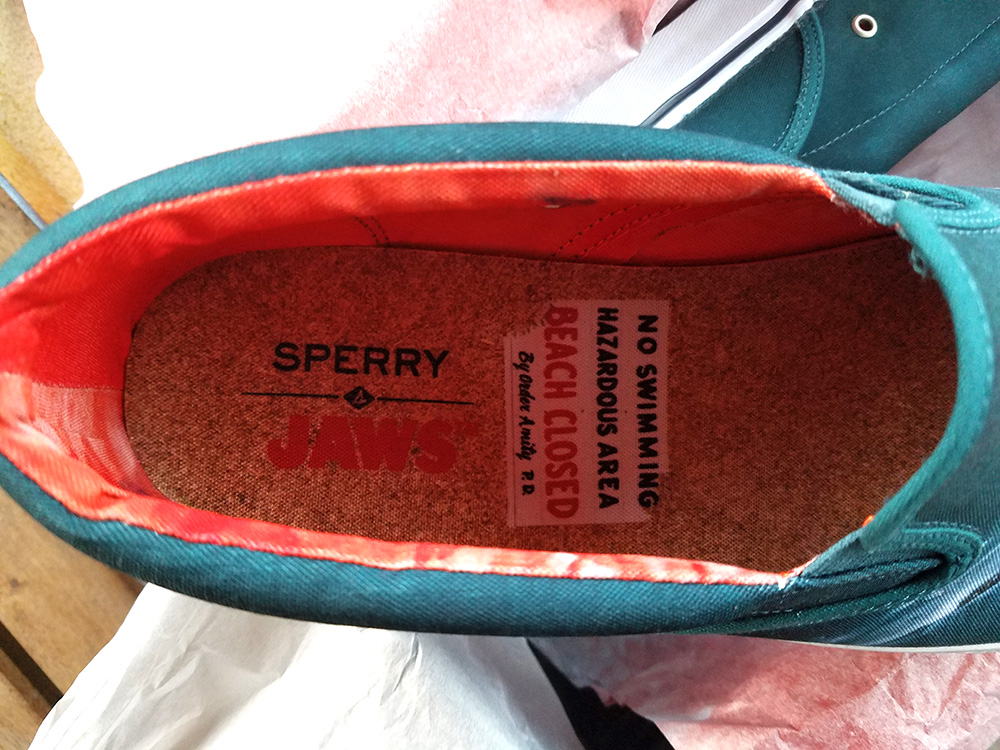 Inside the Sperry x Jaws Striper Slip On 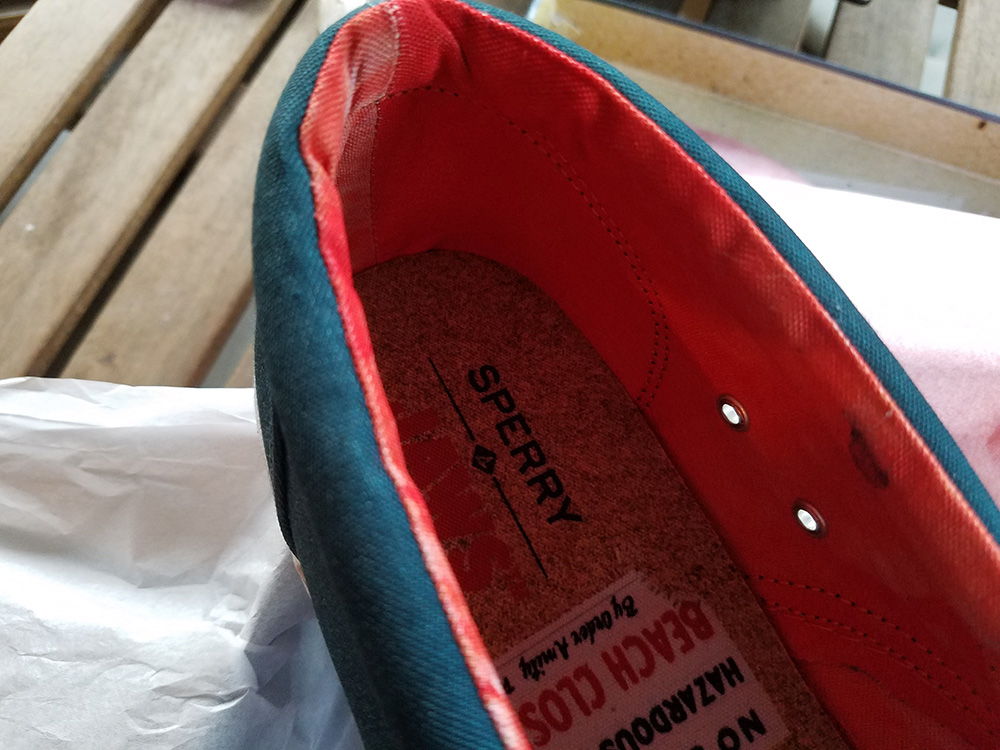 It’s not just the outside of the shoe that Sperry has paid careful attention to. On the inside of the shoe you’ll note not only the sand texture, but once again that recreation of the No Swimming sign makes an appearance on the insole. Quite possibly my favorite detail on these shoes however is the bloody churning water pattern that wraps the entire inside of the shoe. 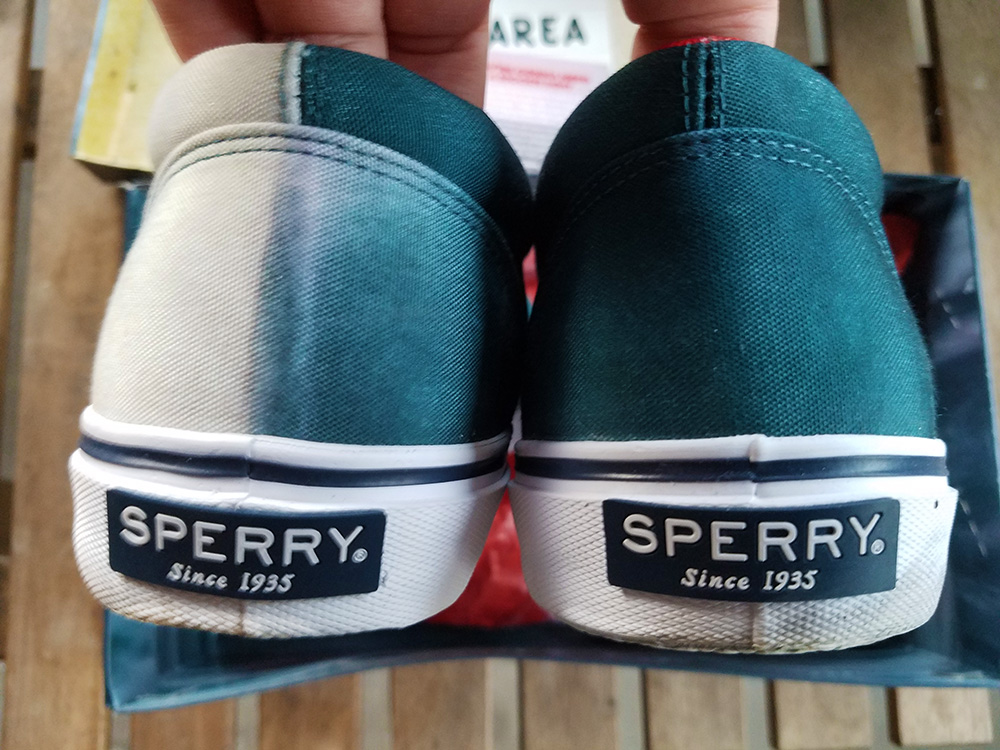 Heel of the Sperry x Jaws Striper Slip On

The back of a shoe is normally pretty boring, but not on these guys. Here you can see the beautiful water coloration continues around the shoe, ending in the center on the left shoe. 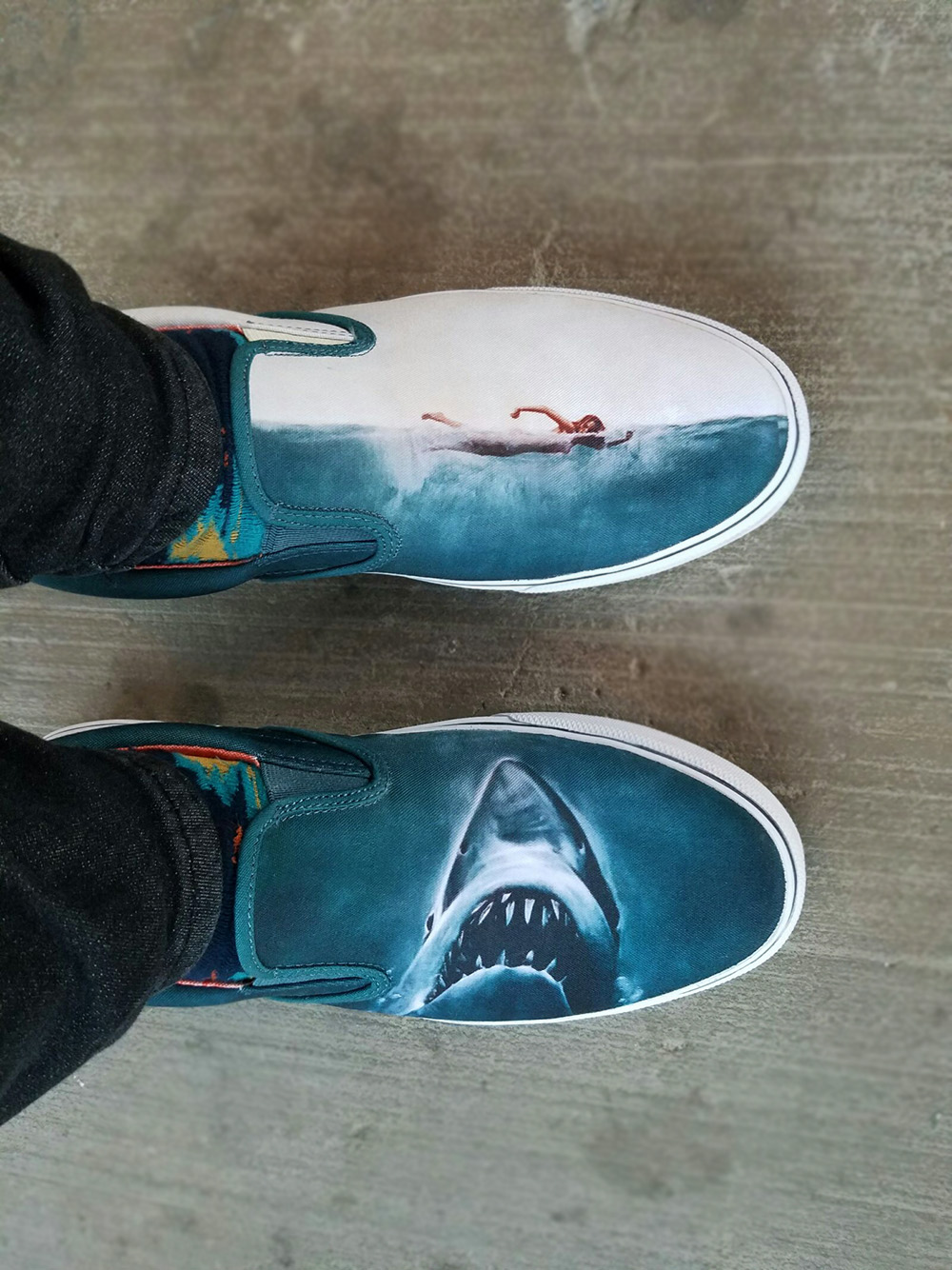 Not only are these shoes beautiful, but they’re pretty darn comfortable as well. As with all low top shoes, you’ll have to make the decision about whether you’re going to wear socks and as with all Sperry shoes, I’d recommend it at least at first due to needing to build up a callus before they’re super comfy on your heel without socks.

These puppies are a tiny bit small on my giant feet, simply because the largest size I could find in stock anywhere was a 12 in men’s. My feet generally hover around a 12.5 so  like I said, they’re a bit snug but it leads me to believe the shoes feet pretty true to size, which you can usually expect from a respected sportswear brand like Sperry.  They’re supportive, and fit fairly wide for a slip on. I expect they’ll stretch a bit with time and patience.

All in all, I’ve gotta say these shoes are phenomenal. If you’re a fan of Jaws, or even just awesome sharks about to eat folks, I highly recommend these shoes if you can find them. The packaging is stellar, the print and construction of the show is high quality and well in line with the level one would expect from Sperry.

Where to buy: I purchased mine from Journeys, and they’re also available directly from Sperry as well.