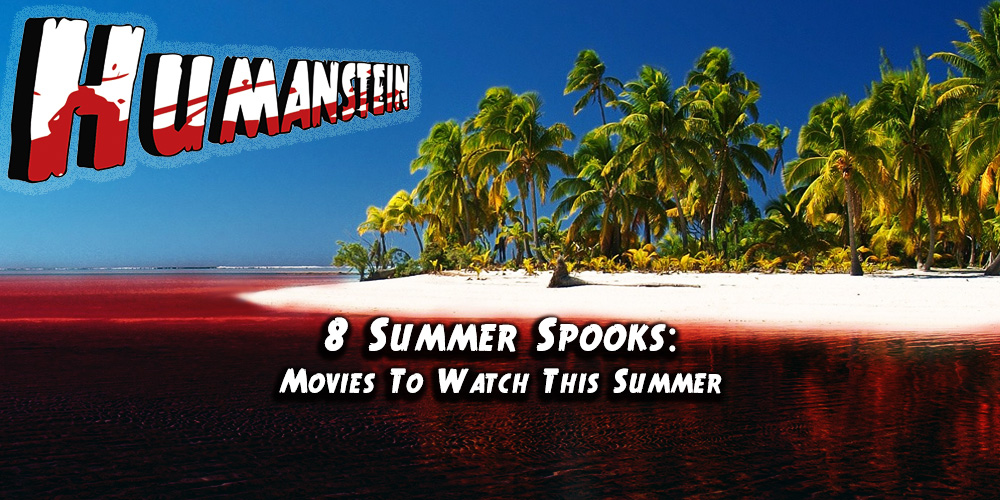 Ah, it’s summer time once again. Cookouts, water parks, tank tops being a thing for a couple months… I honestly loathe the summer. I’m not built for summer. I’m a nighttime person all year, but I become even more of an awful cave person during the summer in Texas. When you see the forecast for the next week includes 6 days well over 100 degrees, I retreat indoors. But I like the idea of summer. And what better way to embrace summer without embracing summer at all than to watch horror movies where bad stuff happens during the summer? It’s perfect. I get my beer and my barbecue but I also get my couch and air conditioning. If you haven’t got your air conditioning sorted then you may want to visit https://allenkelly.com/. Nothing worse than a hot and humid room on a summer’s day. Air conditioning systems can quickly cool the house down, ensuring that people inside can sit comfortably without getting hot. For many homeowners, air conditioning units are essential for summer. If anyone wants to learn more about getting an air conditioning unit, it might be worth following this link to a Mahomet HVAC company website. They should be able to provide useful advice for homeowners considering a HVAC system.

I’ve assembled a little list of some of the all-time great summer fright flicks. I’ve thrown in some spooky-doos too, so it’s not all giant sharks and chainsaws. If you’re planning a movie marathon with your friends, get ready to throw on your Horror Hoodie, get the popcorn ready and prepare for a night of some of the best horror movies ever made, I think so anyway. Some of these movies will be available on Netflix, whilst others may be available on some online streaming websites. In order to put these movies on a bigger screen, people could consider purchasing a hdmi cable. These cables allow people to watch movies from their laptops on their television if it has a HDMI port. It’s always better to watch movies on bigger screens. Anyway, some of these you’ll know and love, and some of them may be just the ticket for when that mercury pushes a little too close to the top of the thermometer and you’re looking for something different. 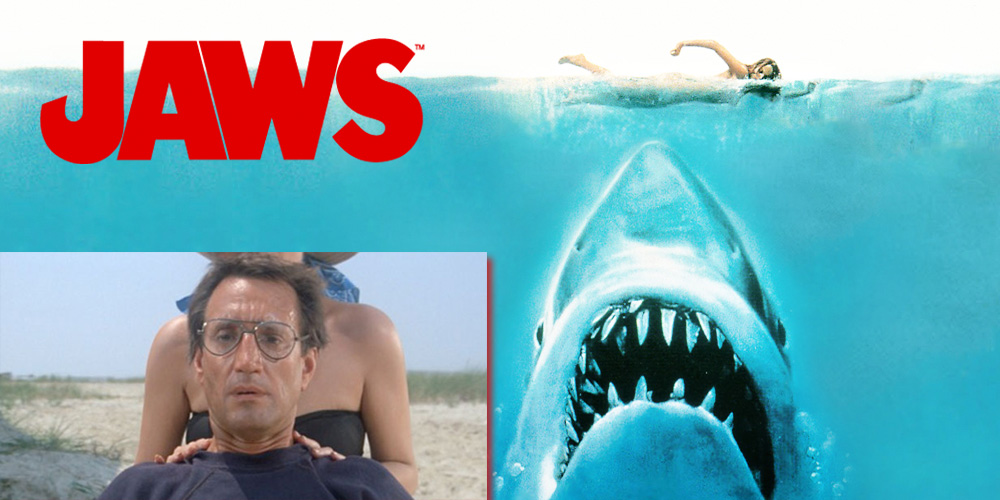 Let’s start big, shall we? You know Jaws. You love Jaws. If you haven’t seen Jaws, please go buy a copy of Jaws right now and watch it. I promise you it’s more important than this list. Or whatever work you happen to be shirking while reading this list.

Usually when a movie’s made before the book it’s based on has even hit shelves, that movie is not going to be very good. Thankfully, this one had the expert eye and mind of Steven Spielberg at the helm, willing a notoriously finicky film production plagued with problems to become one of if not the greatest summer movie ever made, not even to speak of the greatest summer horror film. There’s not much I can say about Jaws that hasn’t been said by critics over the 40 years it’s been scaring kids off beaches, but just rest assured Jaws is a great film, and Jaws IS a horror film and a damn good one at that. 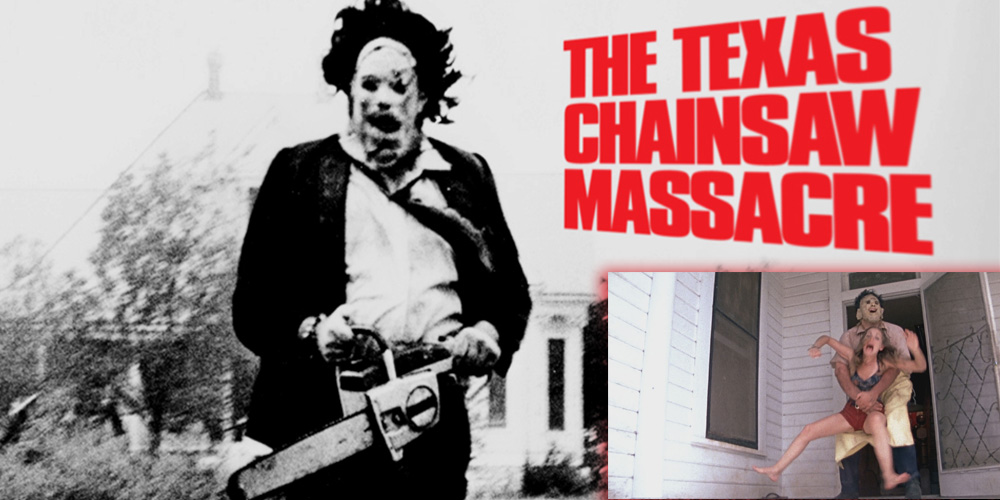 The Texas Chainsaw Massacre is the horror film that proved you can still scare the shit out of your audience in broad daylight. The film was filmed over the summer near Round Rock, Texas with the heat climbing all the way up to 110 degrees. I’ve been there, and will probably be there again in the next few weeks and this film absolutely nails the hot, humid wasteland that Texas can sometimes be during the height of summer. That’d be enough to get it a spot on my summer horror list, but let’s not forget its also the goddamn Texas Chainsaw Massacre.

Brutal, powerful, and terrifying as hell, TCM stands tall as one of the absolute best slashers of all time and set up a legacy and mythology rich enough to still be mined 40 years later. Tobe Hooper made a damn good movie back in ’74 and you’d be remiss to not stick that 40th anniversary Blu-ray in at least once this summer. 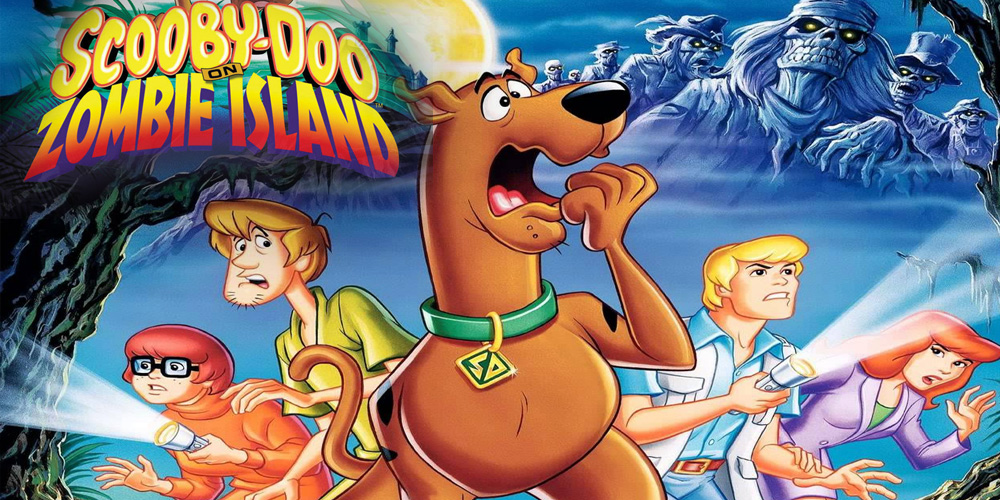 Scooby-Doo on Zombie Island is an absolute gem of a movie. The Scooby gang has been broken up for over a year due to irreconcilable differences, but fate brings them back together for one very important case. The first in a very long string of direct-to-video Scooby movies, this one stands out as not only the best, but definitely the most summery. The gang heads deep into the heart of the Louisiana bayou, sweat dripping off their brow as they investigate an island that’s been haunted for over 300 years. The major difference between this and the rest of the gang’s exploits is that this time, the monsters are real. Featuring a darker tone, stronger animation, and some fantastic voice actors, Adrienne Barbeau from John Carpenter’s The Fog and Catwoman from Batman: The Animated Series chiefly, this kid friendly spooky-doo is fun, scary, and definitely summery. The cicadas are chirping, and you can practically feel the humidity. Good stuff, and perfect for a hot summer night with the kiddos. 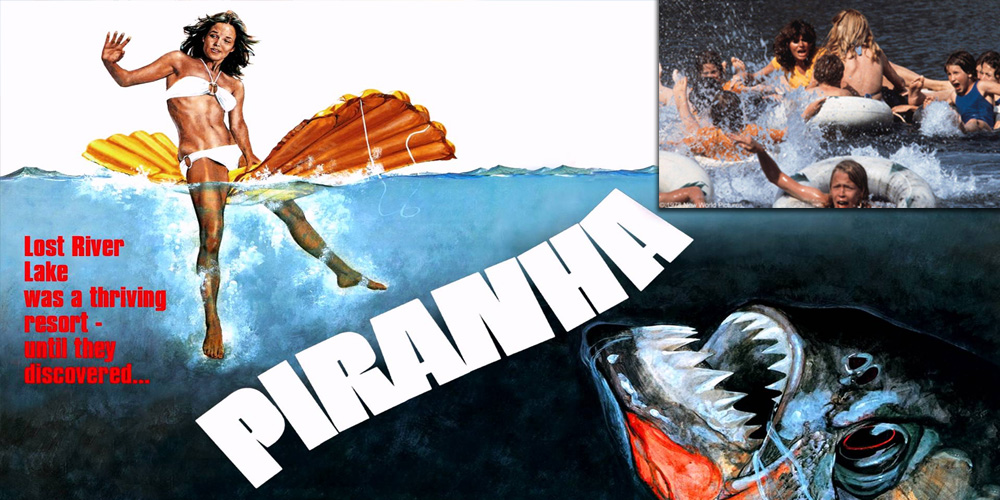 Horror is notorious for films stealing each other’s ideas. It happens all the time. So when Jaws broke box office records by having something in the water eat folks, of course there were going to be imitators. But not all imitators are Joe Dante. Obviously, Piranha owes a lot to Jaws. Dante and Spielberg actually worked together a handful of times over the years (Gremlins), and I’m sure there was some playful ribbing over this film, but Piranha is honestly a great, campy movie with Dante’s signature tongue-firmly-in-cheek style on full display. You know what you’re getting into the second this film starts, with young teens headed to go skinny dipping making the tragic mistake of choosing an abandoned military installation for the sight of their naked night swimming. Dumb, fun, and funny as hell, Piranha makes an absolutely killer summer flick. 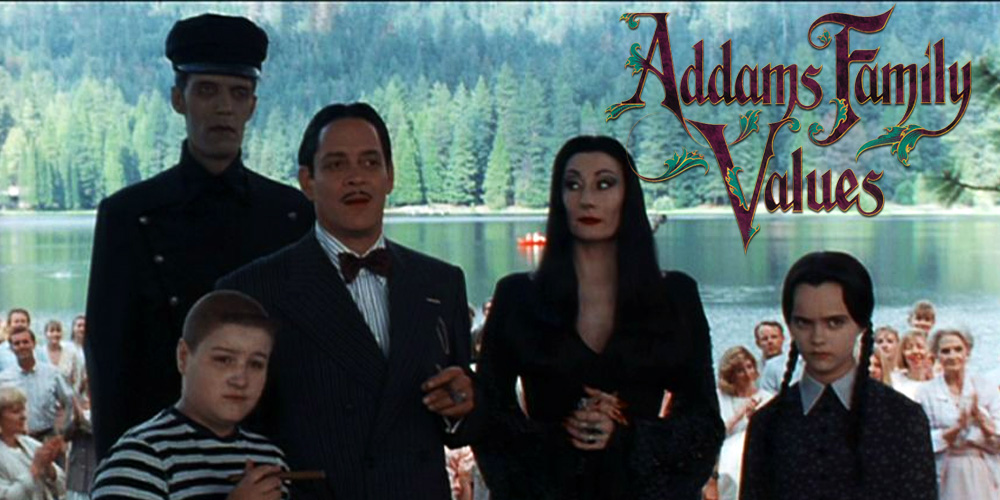 Addams Family Values is a great movie and it’s super summery. Wednesday and Pugsley spend the majority of the film at summer camp. It’s a hoot. The overall story is one of a nanny-cum-serial killer attempting to off Fester, and while the plot isn’t the thickest thing in the world, it’s anchored by an excellent cast, some new characters, and film making prowess. Directed by Barry Sonnenfeld (Men In Black, Get Shorty) and written by Paul Rudnick, the witty, subversive tale is slicker and more fun than the original. Plus, I mean, summer camp. I’m always down for goths at summer camp. 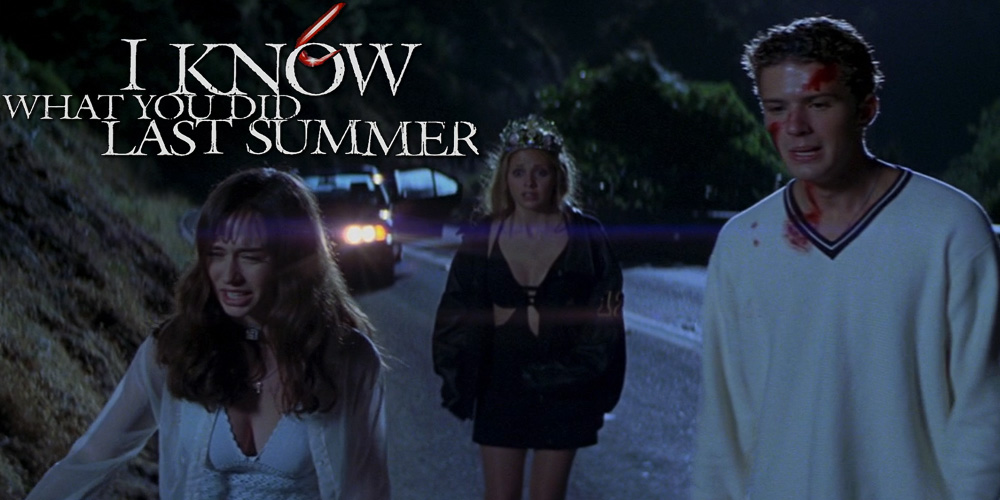 This movie has detractors. A lot of detractors. And they’re not wrong. Usually lambasted as a Scream cash in, the film’s actually written by the same writer, Kevin Williamson and does indeed veer into that campy self-awareness just like Scream and does so in a way that’s not nearly as deft because Wes Craven isn’t the one steering the rig.

So that’s the negative out of the way. It’s not as good as Scream. At the end of the day though, not much is. The post-Scream nineties was a desolate wasteland and this absurd movie was one of the worst but it’s also one of the best. Helmed by Jim Gillespie, director of a handful of other movies that I’d bet money you haven’t seen (D-Tox, Venom, the upcoming Take Down), the movie could easily be forgotten as more mid-nineties dreck. But the absolutely bonkers cast cements this movie as a weird touchstone.

Starring Jennifer Love Hewitt, Sarah Michelle Gellar, Ryan Phillippe, and Freddie Prinze, Jr. the film takes place over two summers and the premise can be boiled down “An Issue of Teen People From 1997 kills a dude and then pretends it didn’t happen and then a dude with a hook fuckin’ murders them.” It plays on the urban legend of The Hook and features Jennifer Love Hewitt screaming a lot. I’m an easy man to please sometimes. Not all-star cinema, but definitely a dumb, fun movie and really, that’s what summer’s all about. That and teens getting killed with a hook. That’s also what summer is all about. 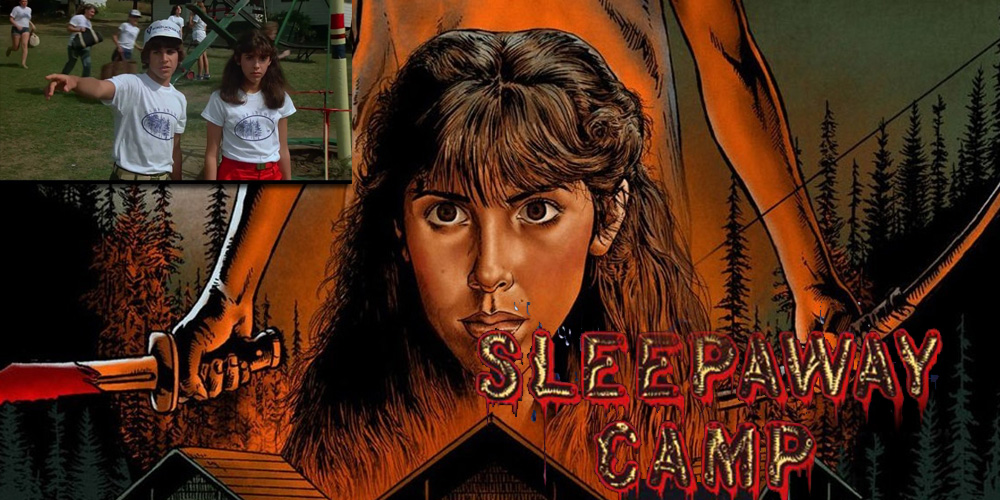 Featuring a unique premise (all deaths need to look like camp accidents) and featuring a cast full of children makes this a pretty one of a kind little movie. Kids die, adults die, lots of folk dies. Someone gets murdered with bees. A ton of people are wearing tiny shirts, regardless of gender. If that doesn’t sell you, I’m not sure how to pitch it any harder.

Written and directed by first time director Robert Hiltzik (he’s a lawyer now!), it’s a weird little movie full of outlandish psycho-sexual imagery and a twist ending that has to be one of the most abrupt in film history. It deserves a watch. If it didn’t deserve a watch, I wouldn’t have included it in that giant essay about camp horror movies that nobody read. So go watch it. 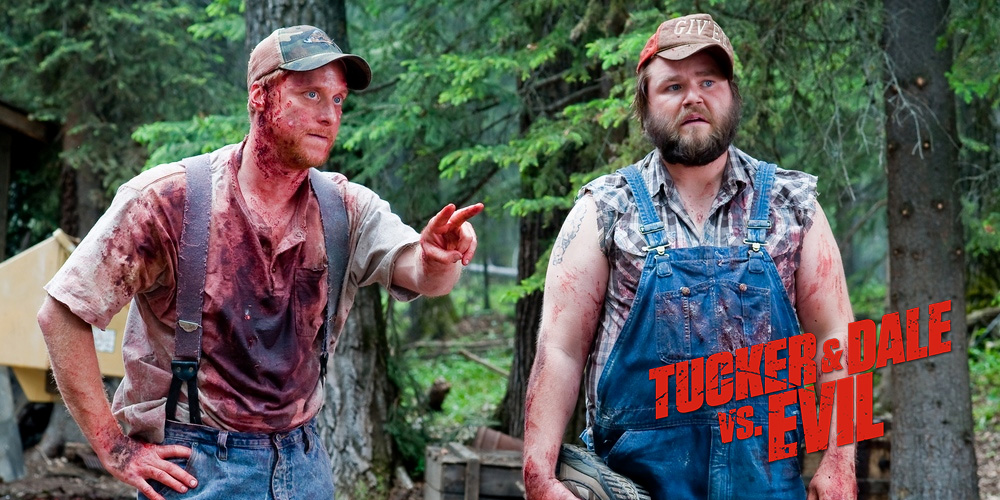 Tucker and Dale vs. Evil is an absolutely stellar film with a novel meta twist that hooks you and performances that keep you hooked. Helmed by Eli Craig, a first time feature director, it features amazing comedic performances by Alan Tudyk (Firefly, Dollhouse) and Tyler Labine (the guy I am referring to when I constantly say “That Guy From Reaper”. He’s the guy from Reaper.) as hillbillies mistaken for murderers by college kids on vacation that have seen one too many summer horror flicks. It’s a bit older but I still won’t spoil the central concept, but rest assured, this one is worth seeing. It’s usually on Netflix and you would absolutely be doing yourself a disservice if you didn’t fire this one up next chance you get. If you regret it, I’ll buy you a beer.

So, that’s my list of summer time recommendations. I know, I know. Your favorite summer movie wasn’t on the list. What was it? Leave it in the comments below, and maybe we’ll end up with a part two. Summer’s a great time to put out a sequel.