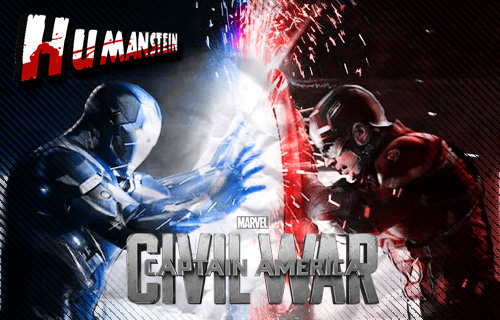 Captain America: Civil War is not Avengers 3, but it sure spends a lot of time feeling like it is. Maybe it’s because it’s the first film released since Avengers 2: Age of Ultron that features our wing headed boy scout. Maybe it’s because the movie is almost directly spurred into motion by the chaos and destruction Ultron and The Avengers wreaked on the small eastern European nation of Sokovia.

Now, about that part…

Once those questions have been posed, the movie does a pretty good job of staying neutral as far as the narrative is concerned. Characters, most notably Scarlet Witch and Black Panther, grapple with their choices and the implications thereof, and they do it very well.

As far as the film and the plot is concerned, it’s pretty damn good. Civil War is a taut, action packed summer blockbuster that is far more satisfying than Age of Ultron. Though it has a large cast and a fairly dense plot, the film manages to stay light and avoid the pratfalls of over the top grimdark storytelling that Batman v Superman fell prey to.

Overall, it bears repeating that I really enjoyed this movie and I honestly feel I will probably enjoy it even more on a second viewing, but this is not a perfect movie. It’s not a perfect Avengers movie, or even a perfect Captain America movie (that honor still lies with Captain America: The Winter Soldier).

The movie’s primary failing is, to be blunt, also Captain America’s largest failing. It, and he, do not do a very good job of showing why the Avengers should be free from oversight, while Tony, the cast of supporting characters, the United Nations, and in the end the battles between the heroes do an excellent job of showcasing why they so badly do.

From the incredibly destructive opening fight with Crossbones through the Nigerian city of Lagos, to the airport battle that involves the destruction of gas trucks, airplanes and pretty much an entire terminal, the heroes continue to cause destruction to both property and we are to assume life as well. When the Secretary of State shows clips of the destruction in the wake of The Battle of New York from Avengers, scenes of the destruction and suffering caused in the city of Novi Grad by the Battle of Sokovia in Age of Ultron, and the loss of life caused by the battle with Crossbones in Lagos, both we and the characters see the cost of this type of heroics.

Yes, the Avengers protect the world, yes the Avengers save people and are the only ones who can go toe to toe with the vast majority of these threats, but at what cost? That is the crux of the emotional conflict of this film. However, it sometimes feels like the movie doesn’t know that.

Heavy spoilers follow, as well as quite a bit of editorializing.

Things get very personal for Captain America when a terrorist attack on the United Nations is seemingly executed by everyone’s favorite greasy haired Manchurian candidate, Bucky Barnes. The Avengers are instructed to capture Barnes, and that just doesn’t sit right with Captain America. He believes there is more at play with this story, and in the end it’s proven that there is. But Captain America doesn’t justify his actions to anyone, not his friends, not his team, not the United States government, and not the global governing body the majority of the heroes have decided they are to answer to. He just simply says “It’s not Bucky’s fault” and expects everyone to fall in line with his judgement.

There are a couple of strange character choices in this movie. It feels strange to say it, but Captain America is almost definitely the least interesting part of this Captain America movie. While the rest of the ever-growing cast grapples with these questions of morality and oversight, Captain America spends the majority of the film with a hyper singular focus, saving Bucky.

The major thing that sticks in my craw is that even when Tony Stark has put the pieces together, Captain America will still not explain himself, or justify his actions. When Tony Stark is the less arrogant individual in a given conflict, you have may taken a few character missteps.

Tony has had a full character arc to grow, grapple with his own failings, his arrogance, and the consequences of his actions. Tony has been through the ringer and has had his sins laid bare before him. Captain America has not had that luxury, and it almost feels cruel to criticize his character for it. But strictly from a storytelling standpoint, it can comes across as annoying. It does not come close to spoiling the film but this was definitely the talking point as I walked out of the theater feeling vaguely down about Captain America.

Despite its handful of flaws, we are thankfully left with a very well told superhero story, one that features many strong performances. Some standout performances are given by series newcomers Tom Holland as an absolutely pitch perfect Spider-Man and Chadwick Boseman as T’Challa the Black Panther. The movie doesn’t allow itself to be bogged down by its darkness, and though it takes itself pretty seriously throughout the film, it allows some levity and breathing room.

On the whole, I would say this is a very well made superhero film, and a very enjoyable movie going experience, although due to some storytelling issues and some weird character missteps, I don’t feel completely comfortable giving it the truly stellar review that many outlets have been giving it. I’d say Captain America: Civil War is a very, very solid B+ and it will quite likely be very divisive among the theater going public and even more so among the superhero fandom.

Should you watch it: Yes.