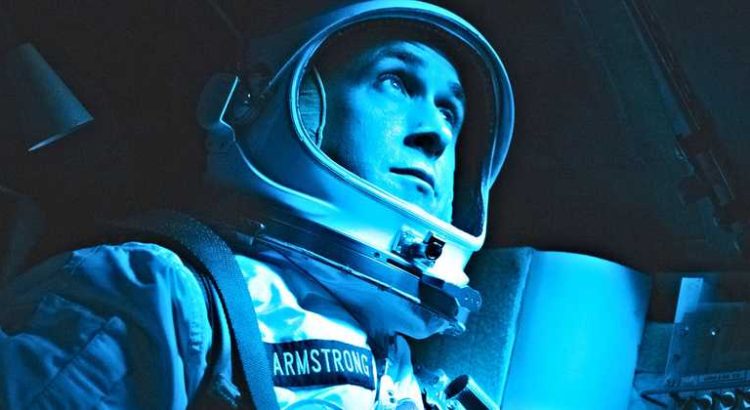 So too is drive, and so too is the good ol’ biopic.

I’ve never been a huge fan of the format, or of films based on true stories at all in truth. They’re often very point-A to point-B and they’re more concerned with getting the facts right than the kind of thing I generally care about in a film. Spoiler: it isn’t the facts. It’s the feeling, the sentiment, the emotion, the wonder. First Man does a pretty good job balancing all of that with the facts, and is a remarkable film as a result, entering the hallowed halls of Films Based On True Stories That I Actually Like. Off the top of my head all I can think of are Goodfellas, The Wolf of Wall Steet, and Zodiac. I’m not saying First Man is equal to those films, however, I’m just sayin’ it’s in good company.

There’s a real give and take here between what feels like a straightforward biopic script by Singer and Chazelle’s need to depict drive as grandiose and powerful. This leads to a pared back and restrained (arguably cold) film in many segments, though I think this restraint definitely serves the story and the protagonist, a figure that I realized I don’t know all that much about.

I knew a fair amount about the space program that eventually led to the moon landing, but I would be lying if I tried to imply I would feel confident speaking on it at length. When I was a kid, though, I was a bit obsessed as kids often are with this sort of thing. I read numerous books about the programs and about the sheer manpower and force of will that led us to accomplish something so great, but I don’t think I’d ever really learned very much about the real human beings responsible for that feet of technical marvel and human spirit. This may serve the film, however, because the versions of these people presented here are impressive, human, and the performances behind them are unilaterally excellent, even if not very many of them are given a lot of the spotlight.

Chazelle brings a definite artistry and his precise hand to the proceedings, Gosling sings in a quiet and delicately cold performance, and Foy is stunning as always but I’ve got to say, Linus Sandgren’s cinematography very well may be the real star.

The visuals and styling are varied, apt, and beautiful. The decision to play with period formats like 16mm and 35mm and the resultant grain serves the film well by permanently grounding it in the period and as a result giving the audience a real and continual understanding of the technical marvel, intense risk, and absolute hubris it took to try and then to accomplish this mission.

I’ve heard much about the supposed manufactured tension the film employs during the space missions and I have to say I disagree. Sure, the audience knows before stepping foot in the theater that Neil and company make it home and back again, but that somehow doesn’t rob the film of any of its earned tension. The choices made in production design, in sound design, and in the close, hand-held photography create a genuine sense of unease because the film constantly reminded us at every turn that these are just human beings attempting to do the impossible, just sixty years after mankind first threw off the shackles of gravity and took to the skies.

You feel the human hands in the process, you see the manufacturing weaknesses, and you see the mistakes. The loss of life involved in the mission is given real weight, the human cost of trying to do something this difficult, and the weight that puts on those who continue to try.

Gosling’s performance is quiet but the strength of his performances is often in what isn’t said. His expressive eyes, the shifts in posture, and the restraint in his voice. All of this serves his Neil Armstrong, and his familial interactions while not as connected into the narrative as I think was intended, do give a great deal of gravity to the story and I won’t pretend that the ending didn’t have my eyes welling with tears right alongside Gosling’s.

The difference between this and the average biopic, for me, is that they tend to be most obsessed with noteworthy events in a famous person’s life. Maybe they’ll spend some time watching them flame out and descend into chaos if they’ve got that to play with, but rarely are they about the quiet moments in a person’s life. Rarer still are those that emphasize what might be considered faults in an otherwise respectable and influential person’s persona.

Here we see a grief-stricken man, one who is burying himself in his work, shutting himself off from himself and his emotions. Struggling to connect with the people around him about anything beside their shares goals, and just when he starts to feel those connections become more, they too are taken from his life. We see a man not driven by vanity or by a desire for greatness, but instead a man who does great work as a coping mechanism, to process his feelings, and to lose himself into something larger than himself.

You get the feeling that all of this, the trials, the fear, and the uncertainty have been a means to work through something that was eating him alive and that the only thing that could save him from that self-destruction via isolation was to succeed, to push through, and gain the perspective necessary to quite literally come back down to earth and remember he has people who need him and care about him.

That Chazelle, Gosling, and company are able to pull this off and do so in a quiet, understated, and subtle way is its own feat of greatness. Great human beings are often quiet and understated and that doesn’t make them or their accomplishments any less great. I think films often are as well. Too often filmgoers turn up their noses at work that doesn’t trade in flash and panache and let these smaller, less obvious films go by the wayside and I think that’s a minor tragedy.

First Man is one such film, and its grace and beauty should not go unnoticed because it sets aside the louder signals of greatness that Chazelle’s previous work emphasized in favor of quiet poignance.