Cinema is famously the great empathy machine, driving viewers to place themselves in the shoes of people dissimilar to themselves. Opening doors, or at the very least giving us keyholes to look through into other lives and other worlds than the ones we find ourselves in. When that rare magic works we can find ourselves experiencing worlds and lives and emotions we may have never dreamt of or even humored.

For some Super Dark Times will function as such a doorway. The film builds a rich, organic world, populates it with characters that feel real and then places us intimately alongside them. For others, a perhaps rarer magic is in play, one of opening that doorway upon the self. Inspiring introspection and rumination through realism and at once comforting and disheartening emotional honesty.

Many films aim to be relatable, many fumble their way into an emotional connection by clumsily spotlighting easily accessible shared experience. Broad comedies aim for this. Dramas often do as well. For many films, it seems an unstated goal to identify their audience and manipulate them by mining pop cultural nostalgia or miming common tropes and hoping these tactics rings true. Of course, these cheap ploys rarely do. Super Dark Times, on the other hand, is a film that seamlessly draws you into its world, organically enmeshing you in its assorted cast of real, breathing flesh and blood characters. For me, the effect bordered on shocking. These particular dark times were centered around an experience I never had, but the emotion, tone, and sense of place vividly comingled with my own life and my very real experiences. I suspect the effect will be similar for many. 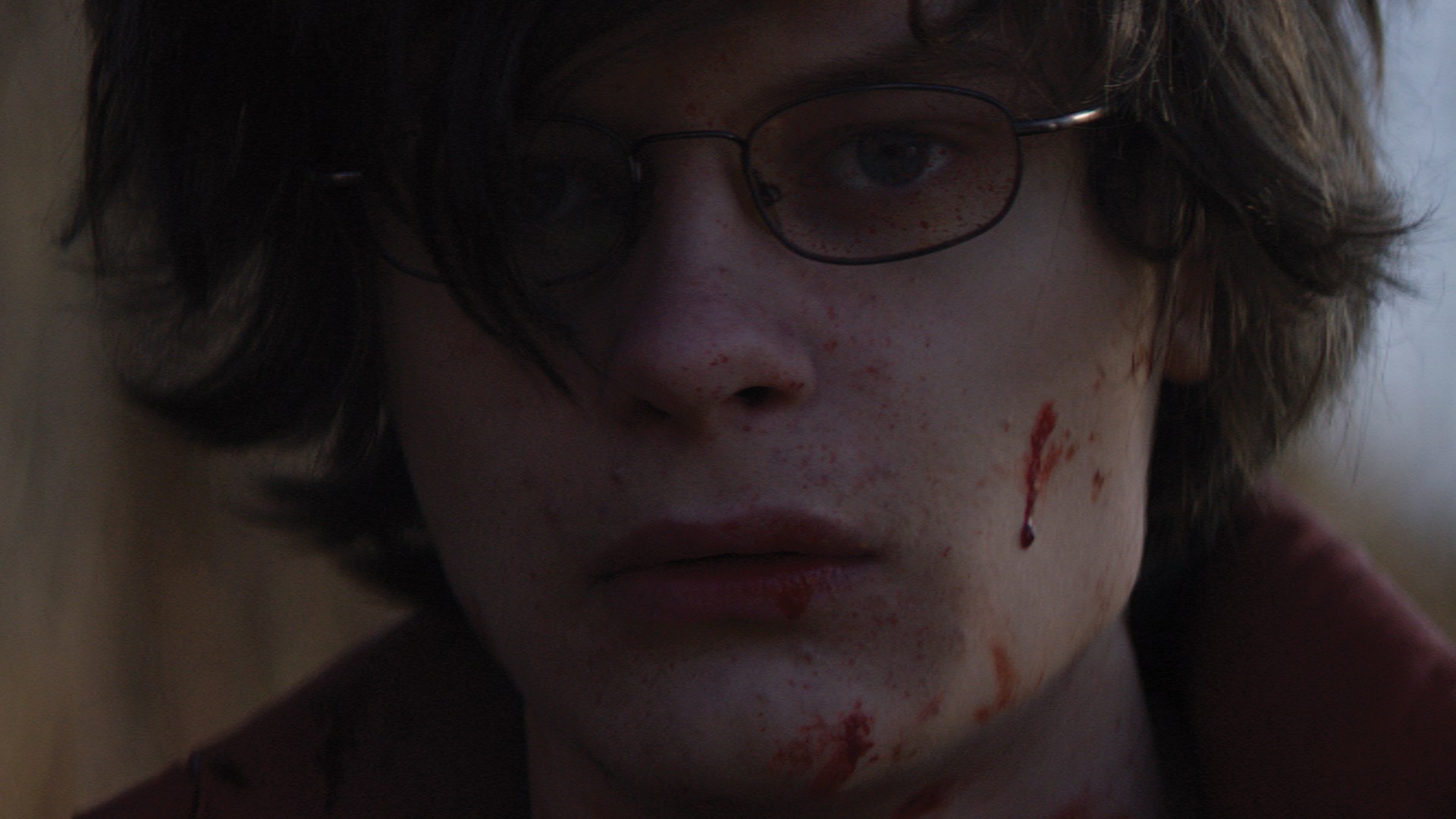 My adolescence was not the easiest time. I dealt with a lot of things pretty poorly. I lashed out at the people around me for things that were very much not under their control. I was vindictive and moody, and a right bastard if we’re being honest. I was also confused, and lost, and sensitive. In other words, I was a teenager, but of the specific ilk depicted in Kevin Phillips’ Super Dark Times.

I found myself a participant in the film, rather than a removed observer. I was these boys. I had these hazy, cold afternoons. I have been, at one time or another, the young boy witnessing things he doesn’t fully understand, and the cold, angry boy moving like a ghost through the ever-evolving world of teenage sexual politics.

So too have I been the sensitive young man holding onto a secret that threatens to destroy him and everyone he loves. Or the outsider making bad choices out of a misguided desire to feel cool, fit in, or escape the insurmountable hardship of his life.

I have walked home in the dark to a small house with a wet driveway, seeing streetlight bouncing off the damp concrete with shame and fear in my heart. I too felt a chill down my spine as I walked towards a doorway lit by a cheap blow-molded Christmas candle purchased by the loving mother waiting inside to be lied to. I have heard the deafening silence of a friendship being crushed by the weight of isolation and guilt.

In lesser hands, a film that revolved around these things may have insulted me. It may have felt like a bullshit pastiche of a time, and place and emotions that were once mine. This could have been a cartoon. Instead, it felt like a mirror.

All of the above, the sheer Cassavetian reality, the emotional heft, the nuance, and depth, is communicated effortlessly. The film is beautifully made. The cold and damp landscape slithers against you like an ice cube down your shirt thanks to gorgeous and intimate cinematography. Beautiful portraiture of suburban desolation juxtaposed with warm, familiar interiors. Those safe interiors grow foreign and daunting as we follow our leads down rabbit holes of isolation and lies. The writing is sharp, and smart, and raw. These boys, and these girls make stupid, honest choices. They’re real, they’re human, and for a lot of viewers, they’re us. 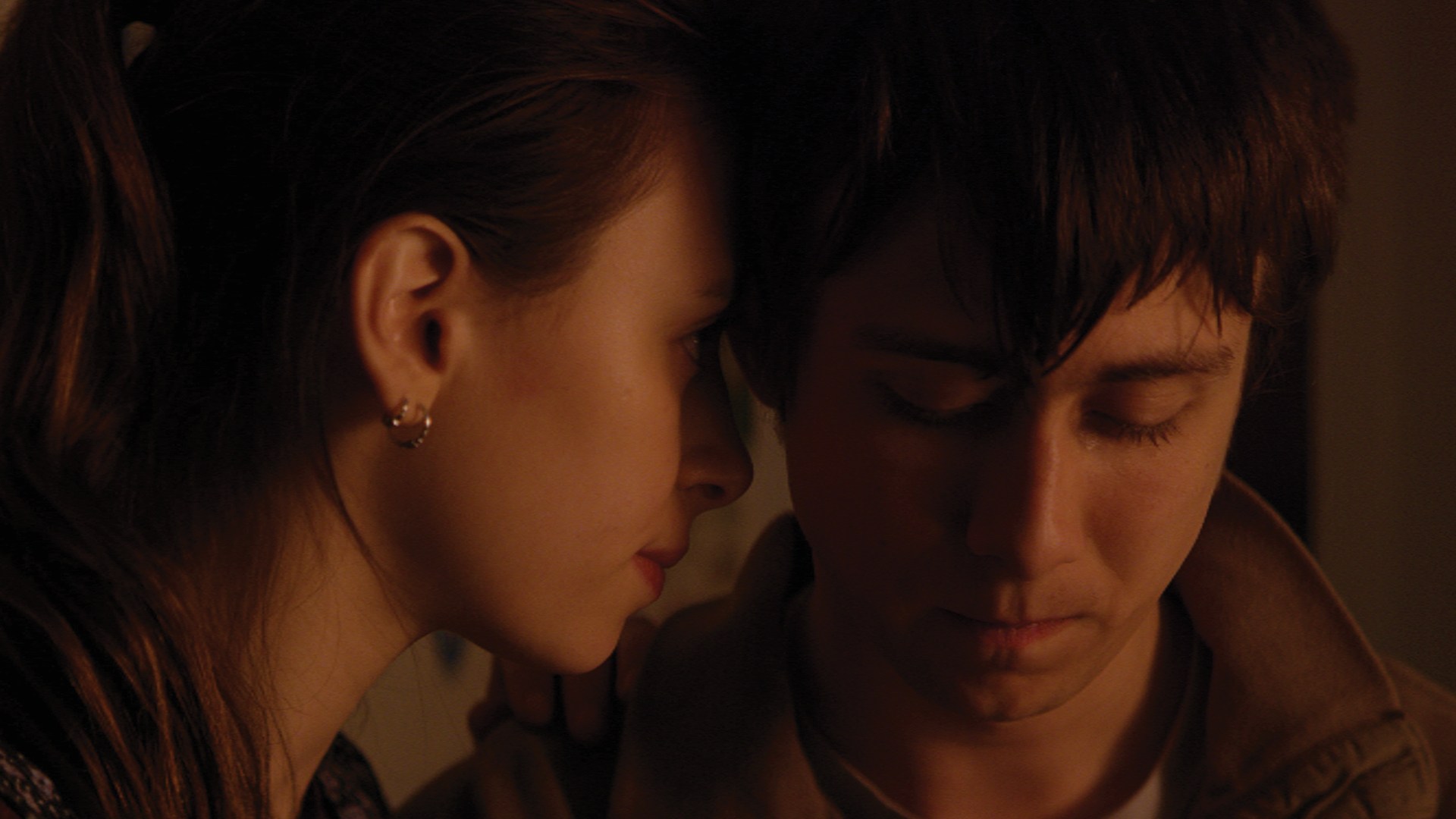 This exploration of the damage that guilt inflicts on a person and the transitive damage it inflicts on those around them is haunting. Kevin Phillips, in his first feature-length outing, executes this taut story with deft hands, a soft heart, and empathy to spare. This cocktail means the film’s violence cuts deep.

Super Dark Times is an intensely human film. This is not a slapstick send-up of the darkness in the hearts of hormonal youth. While I hold many of those satirical works close to my heart, this is somehow much more. It’s not Heathers, it’s the violence and bleakness that inspired it.

The film’s haunting cold open looms over the film, a parable explaining what we are to see, only truly resonating once the violence to come has played out.

A broken window and smears of blood. A panicked animal that’s wounded itself so severely in the wake of the chaos it’s wrought that the only humane thing to do is put it out of its misery. A mistake. An accident. A borrowed samurai sword. A high school window. Blood and cold tile under fluorescent light. How long did the deer bleed on the floor before the police put it down, one with a smile and the other a grimace?

In the wake of that afternoon in the park, Zach finds himself growing ever more distant from the people around him. You feel his sadness, his guilt, his shame. You feel his tender heart take blow after blow from the trauma. His desire for intimacy and the knowledge that revealing the truth would destroy it all is palpable. His growing relationship with Allison, his crumbling one with Josh. The tender moments that Allison and Zach share are as touching and realistic a depiction of young affection and vulnerability as any I have ever seen. These moments are so honest and real that they feel like pages from a diary more than a screenplay. 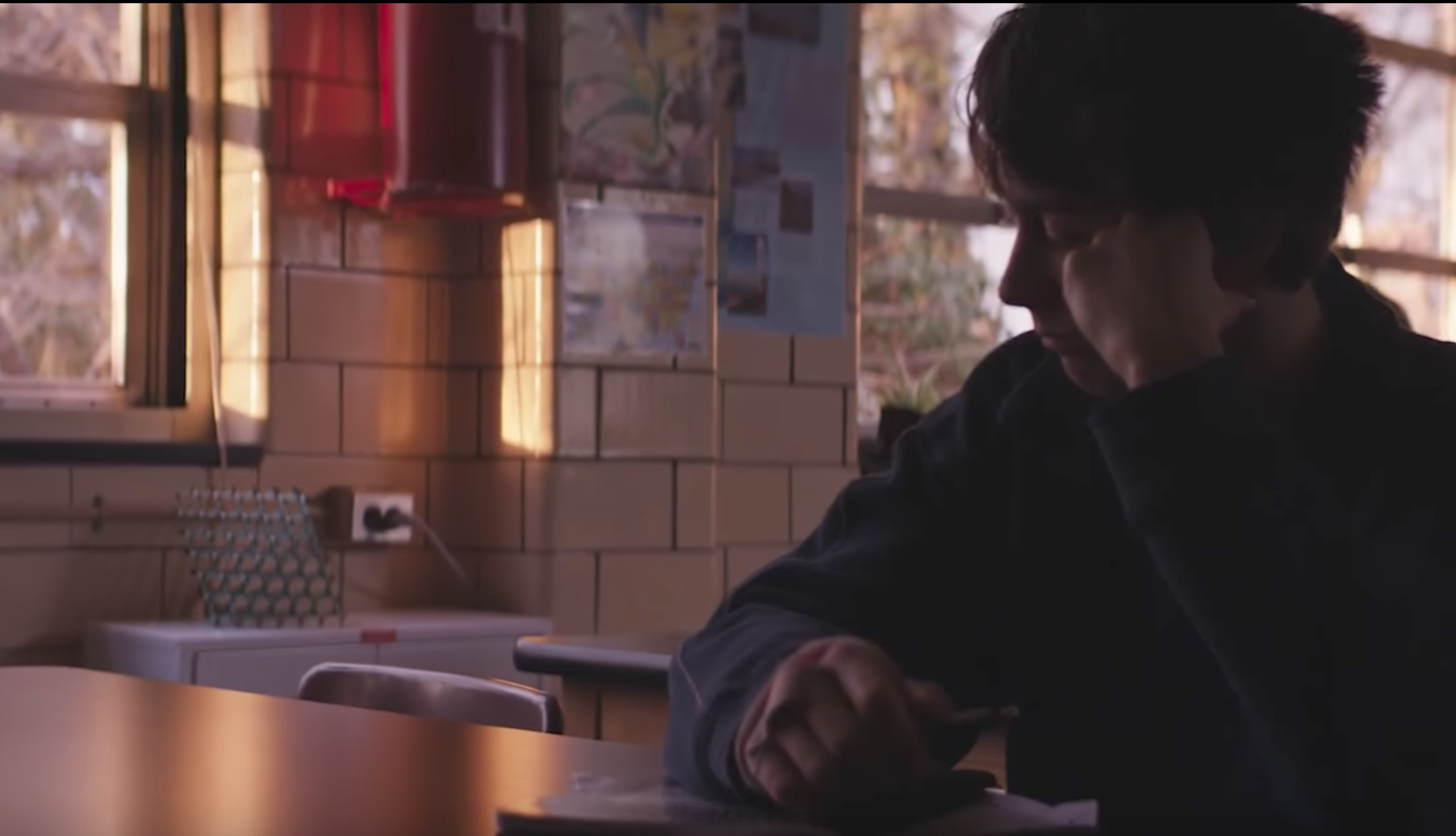 His friend Josh feels these same things, but instead of being wracked by his guilt, his fear vinegars into anger and he drowns in it. The accidental violence begets premeditated violence. His isolation and rage become a cudgel with which to lash out with, first at those he hates and then at those he is jealous of. Their normalcy and comfort, Zach’s supposed ability to let this go and Allison’s affection for Zach all crystallize into a weapon to punish them for what he wishes he had. Though thankfully few among us have ever taken our rage and isolation to as dark a place as his went, that danger is there. Have you ever felt like you’ve hit a point of no return? I know I have.

Allison feels full and real. She is Zach’s dream girl but is, more importantly, a real, fleshed out human being in her own right, not defined by being the object of his affection, nor by Josh’s. She exists outside of them, a fact that is missed in fiction almost as frequently as in the daydreams of young boys.

A normal teenage friendship on film might dissolve over a girl, here that girl is less a prop than a young woman caught in the maelstrom of these boys’ violence, both the overt and the subtextual. There’s a lot to unpack in Zach and Josh’s reaction to Allison. Unknowingly exacerbating things through no fault of her own simply by being. A witness to, and unwitting fuel for, a fire of misplaced anger and confusion.

The film works as well as it does because the relationships are at the heart of it. The growth and dissolution of relationships is a cornerstone of adolescence and the organic, naturalistic approach to them here is something to be lauded.

So much of our fiction, and as we are constantly reminded, our news media, focuses on the violence in our world and the perpetrators thereof. Very little space or airtime is given to the victims, those people who did nothing wrong. Their stories are viewed as less exciting, they don’t draw as big of ratings. Their closure is the one that matters, and fittingly the film does not provide us with nice, neat closure for Zach or Josh. We are left to our own judgment as to how their story plays out. Does Zach face the same dark fate that Josh does for his crimes? If that’s the case, does he deserve it? There are no easy answers to be had and the film is better for it. 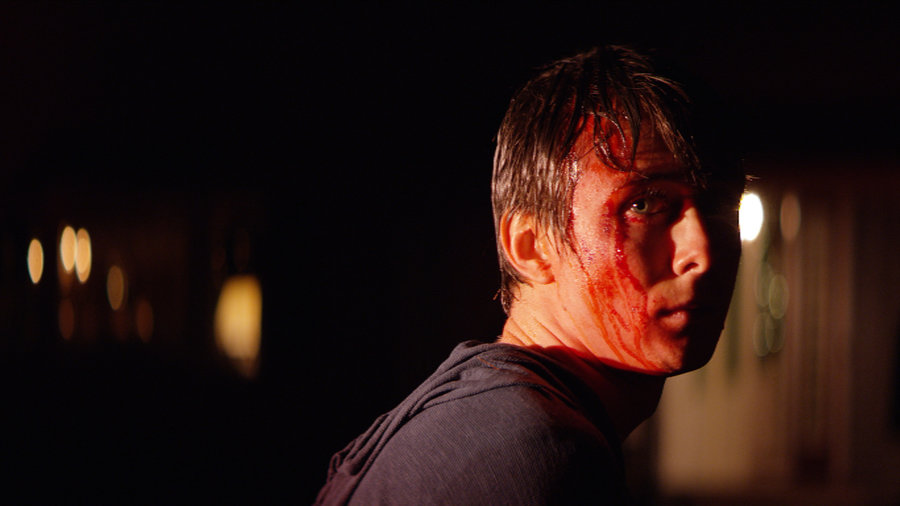 We enter this world from Allison’s perspective, watching the glee in the policeman’s face as he holds the deer out for his partner’s boot, and it closes with her returning to that same school. A scar on her neck, a permanent reminder of what will likely be remembered as the worst day of her life. She will never forget what happened but she smiles nonetheless. Despite all of the darkness, life will go on.

Super Dark Times is an example of a film firing on all cylinders. A clever and organic script from Ben Collins and Luke Piotrowski, being delivered perfectly by Owen Campbell’s Zach, Charlie Tahan’s Josh, and Elizabeth Cappuccino’s Allison, and captured beautifully by cinematographer Eli Born. Phillips and company ratchet the tension, both the internal and external in such a skillful way that my heart was pounding even as it was breaking.

While watching Super Dark Times I felt as though I was looking into a world I knew, seeing people I knew grapple with problems both familiar and extraordinary. I felt their pain, and in moments their joy. A moody, brutal, honest little movie, Phillips captures a tone and sustains it the entire time. This movie seems like a touchstone. It’s the kind of movie I would have gravitated to when I was younger because of its honesty, and it’s the kind of movie I’d keep returning to as an adult because it feels at once like a time capsule, a mirror, and a warning. Movies like this don’t come along very often. When they do, they’re remembered. This is a film destined for cult status, and that status will be well deserved.

Super Dark Times is in select theaters now and is available on VOD October 3rd, 2017.