Last week’s Riverdale ended with two strong revelations: Cheryl Blossom is guilty and that Jason Blossom didn’t die on the 4th of July as previously thought but rather a week later. Riverdale’s first two episodes were a freight train, and while episode 3, Body Double is a very enjoyable slice of television it veers too closely into After School Special territory to be viewed as strongly or as favorably as the first two. 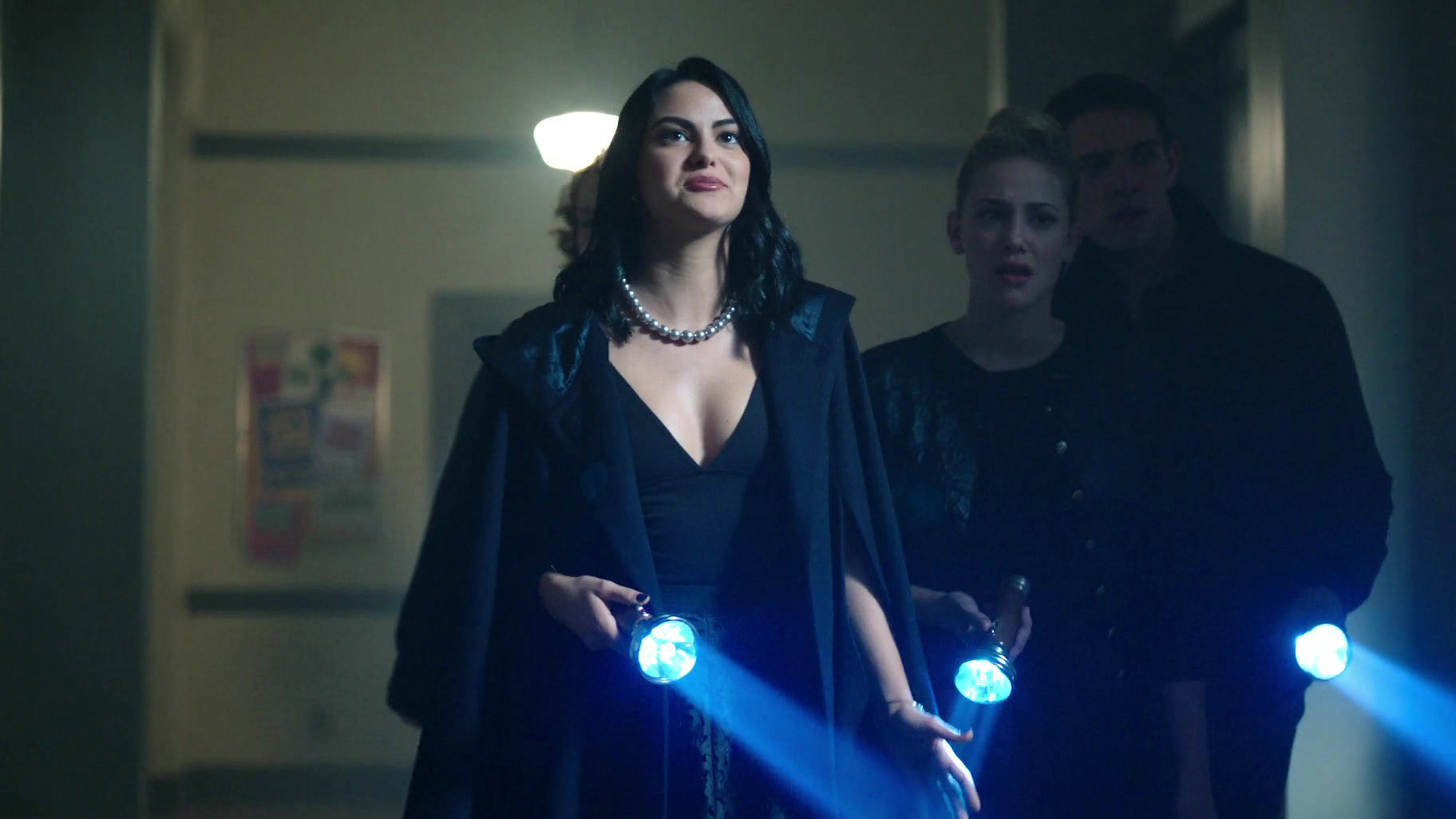 This week’s primary focus was on Betty and Veronica, which was a good choice. B&V are well served by the extra screentime and their characters underwent some interesting changes over the course of Body Double, namely that they went “Full Dark, No Stars” and Betty in particular discovered out that when you stare directly into the abyss, well, the abyss may stare directly back into you. Betty begins working on the school’s newspaper, The Blue and Gold while Veronica and Ethel Muggs (played by Shannon Purser, Barb of Stranger Things fame) investigate a “shame book”, a ledger kept by the football team documenting sexual escapades with Riverdale’s young ladies. The book contains an elaborate sexual point system with the ostensible point of crowning some sort of sex king at the end of the year.

This does not sit well with them, especially considering the book’s simultaneous celebration of sexuality and the football team’s habit of publicly shaming the girls documented therein for sexual acts both real and imagined. This hits especially close to home for the girls when Veronica makes out with the football coach’s son (Chuck Clayton, played by Jordan Calloway) and made a spectacle of on Instagram for having received, and I quote, a “Sticky Maple”. The mind boggles at what that must mean, but suffice it to say Veronica didn’t do it. Enter the After School Special episode of Riverdale. Archie’s subplot is also infused with a bit of the ol’ After School Special as he receives a lesson in white privilege from Josie and the Pussycats in a scene that was simultaneously very well done and almost comically on the nose. When you tackle these sorts of things a level of delicacy is called for, lest you risk your Sexy Dangerous Teen drama coming across more like teenagers reading the cue card version of a very impassioned Tumblr post. 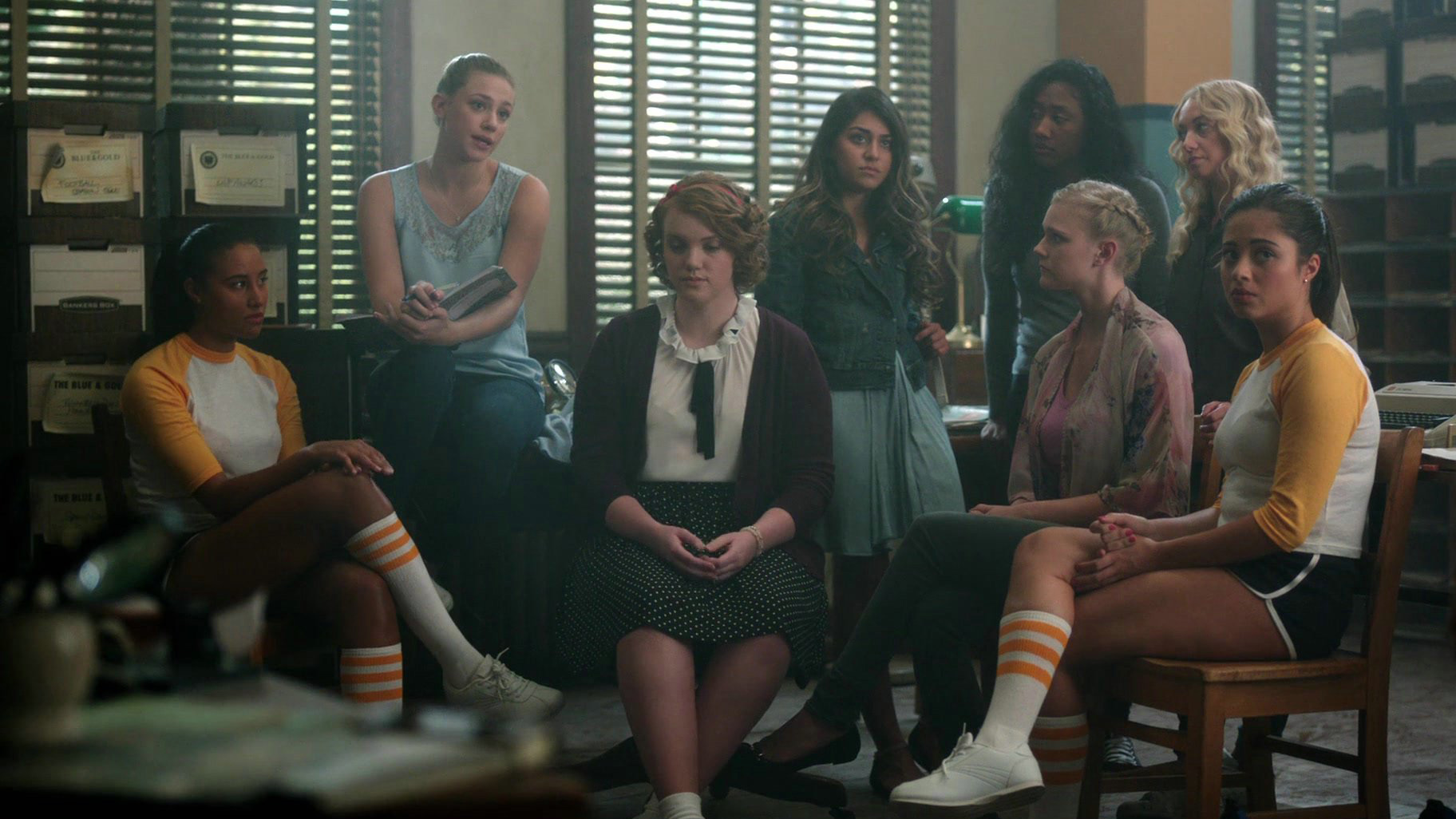 There is something to be said for Riverdale’s third entry tackling social issues head on. There is, on the other hand, something to be said about its approach being a bit heavy handed. While I definitely agree that slut-shaming is an issue that deserves to be discussed, especially on a show that is ostensibly for teens (“I believe the children are our future…” yadda, yadda) the methodology chosen here is a little too hamfisted to really land in the way I suspect it was intended to.

Removing those gripes from the equation, I’ve gotta say I absolutely loved the vast majority of this episode. Some of the moments, the high spots if you will, were so astonishingly over the top that they wouldn’t have worked anywhere else, which I think will be the hallmark of Riverdale. Betty and Veronica’s plan to go “Full Dark, No Stars” in order to get justice and/or vengeance on the football team, and Chuck Clayton in particular, was so bananas that it was a thing of beauty. Goofy, over the top sexuality played up to a point where a ridiculous black bob wig was involved, and threats to boil a handcuffed man alive in a hot tub are so far removed from reality and played completely straight that it works gangbusters. As a whole, Riverdale has never shied away from covering sexual storylines, and although the scenes are never quite as explicit as what you might find on adult websites like https://www.porn-hd.xxx/ sex definitely still plays a significant role in some of the larger plot lines throughout the series. 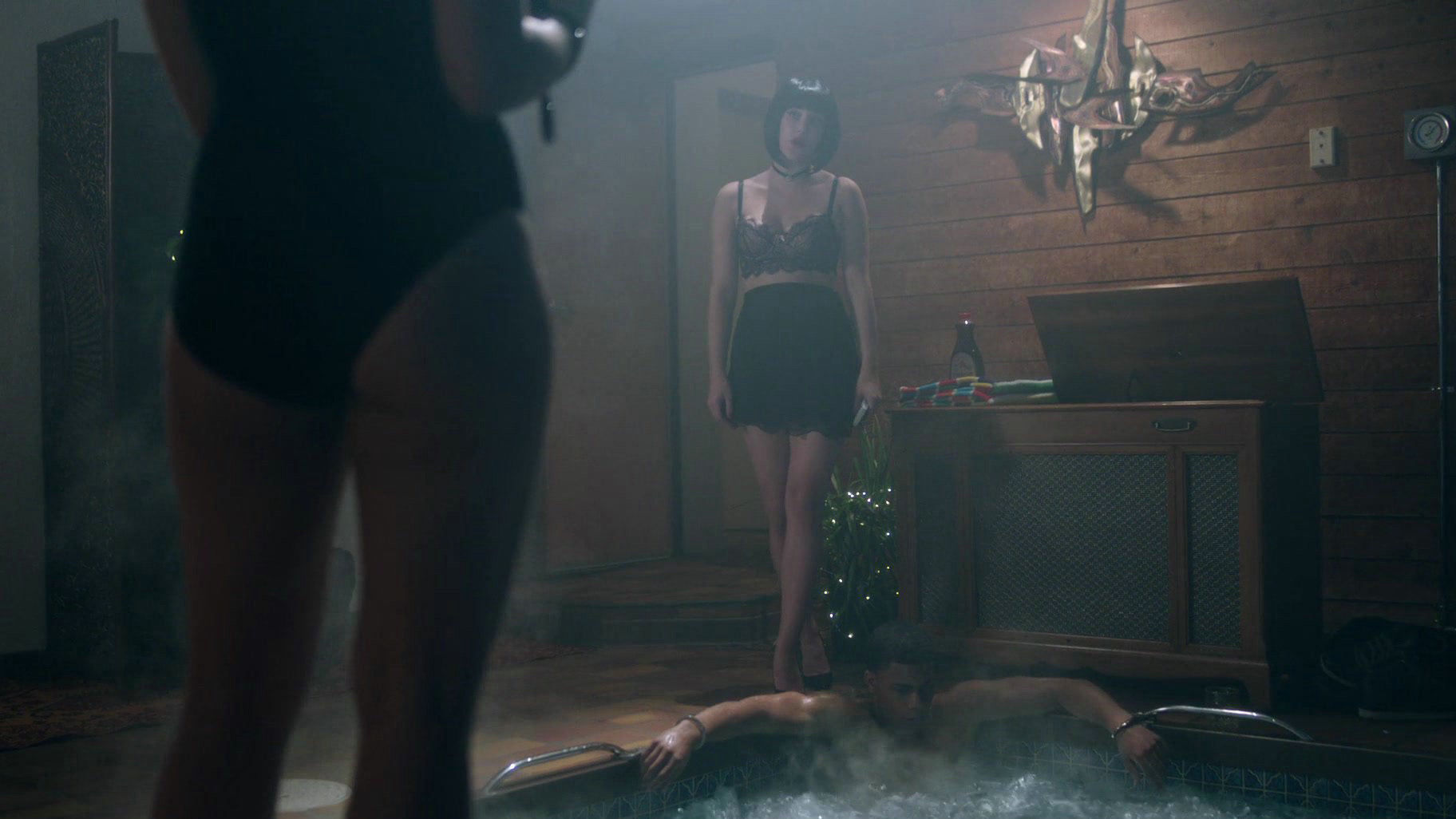 Betty, donning her Bad Girl wig and slipping into a violent fugue state while forgetting who she is (Calling herself by her sister’s name), who she’s torturing (Calling Chuck by Jason’s name) and then covering Chuck with maple syrup made for such a wonderfully surreal and likely quintessentially Riverdale scene. Jughead’s deadpan delivery of lines like “I’m off to interrogate an evil Adventure Scout” and Archie’s bald-faced acceptance of such a ludicrous sentence is similarly amazing. Cheryl Blossom realizing that Jason was just as much of a womanizer and chauvinist as the rest of the team was another high spot for me, particularly when coupled with the implications therein if they were as, well, twincestuous as the show currently seems to be angling for. 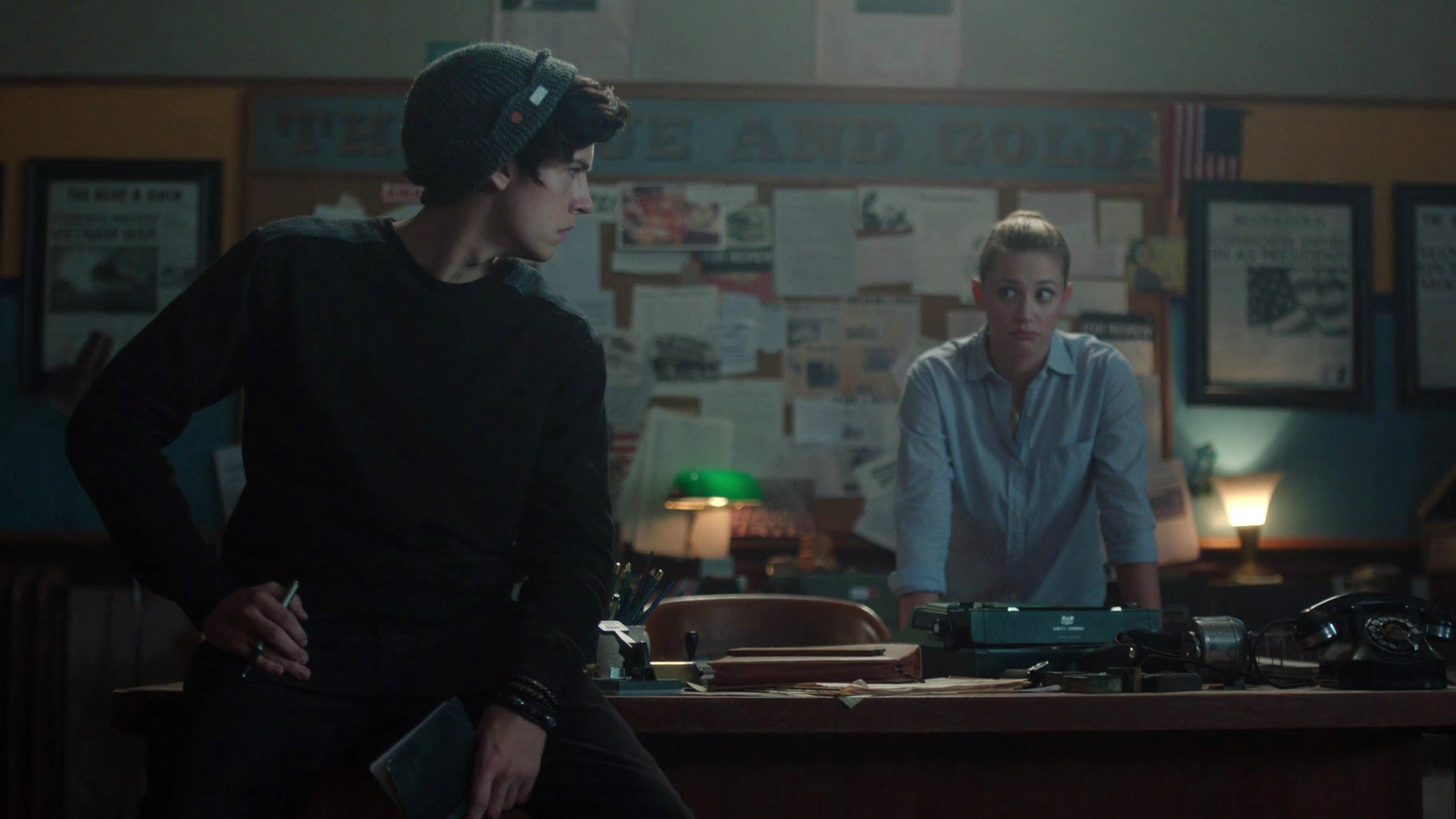 The core plot’s progression moves forward mostly as bookends thanks to Cheryl’s brief interrogation by the police regarding Jason, revealing that Jason had intended to run away from home while staging his own death and that she heard a gunshot on the morning of July 4th. Archie comes forward to reveal that he too heard the gunshot (while insisting he was alone). Jughead, who gains some extra authority and sanction in his quest for the truth by working with Betty on the school paper, picks up that investigative thread and identifies that Dilton Doiley, head of the local Adventure Scouts was the one who fired the gun that Cheryl, Archie, and Ms. Grundy heard that morning. Doiley, in exchange for keeping the fact that he was teaching the scouts how to shoot between them, reveals to Jughead and Betty that he saw Ms. Grundy’s car at the river that morning which spells doom for Archie and Ms. Grundy’s secret. 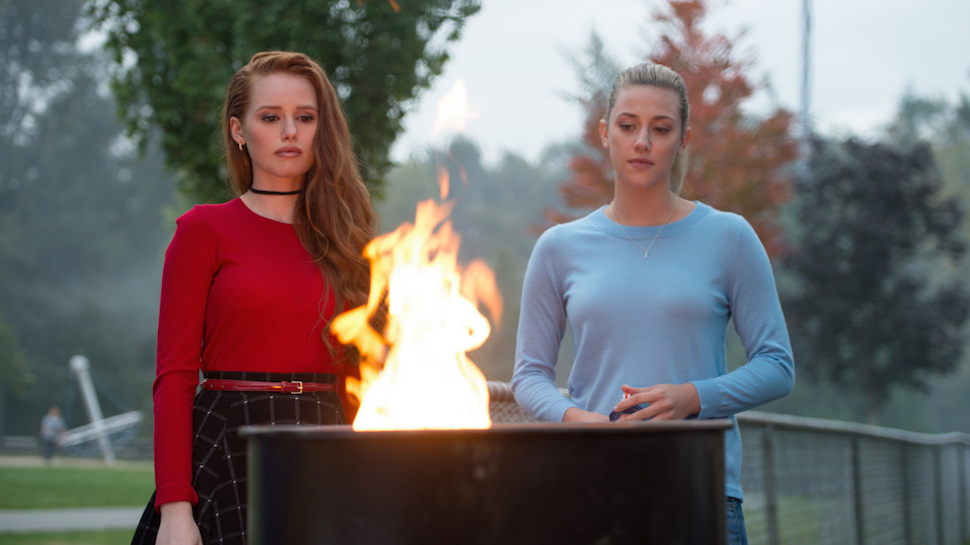 Like many mystery-box shows, we took a step forward and a step backward on the overall mystery this week, while next week’s episode promises yet another mystery in the form of the true identity of “Ms. Grundy”, who apparently is not all that she seems. Despite a few missteps toward being A Very Special Episode, Body Double is a satisfying progression of the story with enough character and plot progression to keep the Riverdale hype train moving forward for me.

Next Time On Riverdale