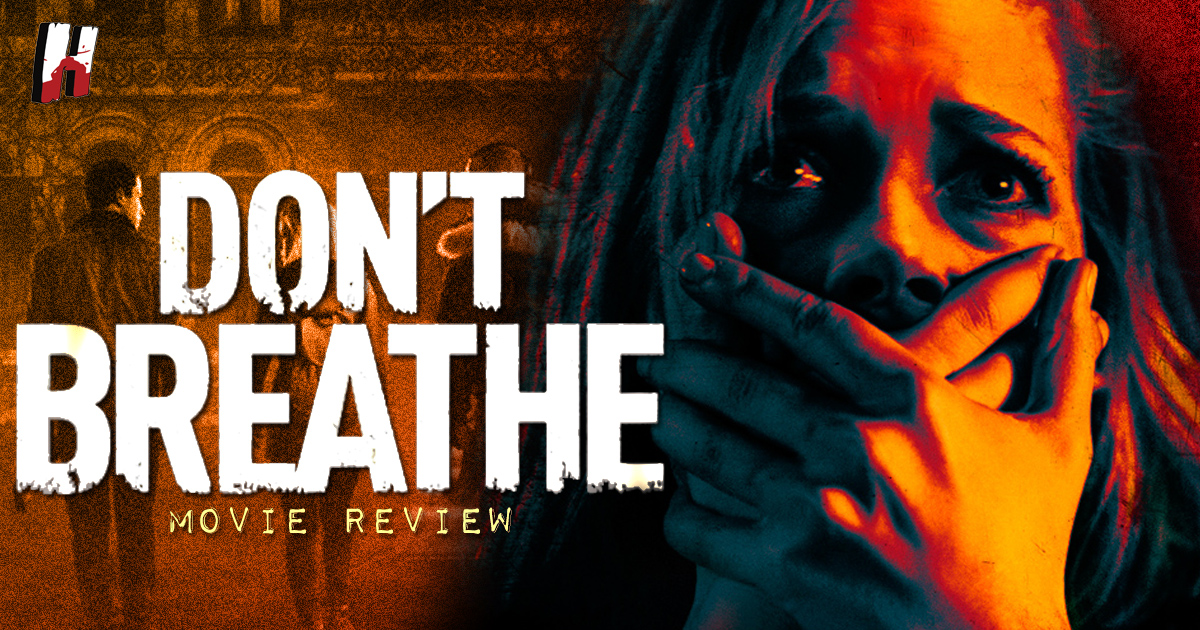 These are words film critics bandy around quite a bit, especially in the world of genre films. Every horror film released in the year 2016 seems to have been able to find someone who’s particular tastes and cinematic background lead them to call it brutal, tense, and of course, scary. What I’m getting at is that these are words that get overused. Bear that in mind as I tell you that I have seen a film that stands to redefine our usage of these words. A film made with such a deft hand and a strong eye to what the horror community is hungry for. That film is Fede Alvarez’s second feature length outing, Don’t Breathe.

I was a little late to the boat on Alvarez’s first feature film, 2013’s Evil Dead, but when I finally saw it I was absolutely shocked. A young filmmaker was able to take the bones of one of the most beloved and revered horror franchises in history and not only managed to breathe new life into it but go even farther and reinvent it for a new generation. Reinvigoration, revitalization, and enough style and substance to differentiate it from the original. That’s the platonic ideal of what a remake should be right? I can’t remember a film in my lifetime that has managed to as deftly honor and reinvent a film so beloved. The Evil Dead is a strong enough film to enter the annals of horror remake history, a hallowed ground generally only agreed to be trod upon by Carpenter’s The Thing, Cronenberg’s The Fly and possibly Russell’s The Blob or Savini’s Night of the Living Dead. This was his first film? Alvarez would be a filmmaker to watch.

Lo and behold, Alvarez has made good on the promise the horror world saw in his first film in a big way. The Uruguayan director’s sophomore outing is a beautifully told, morally ambiguous and harsh tale of a home invasion gone very, very wrong. 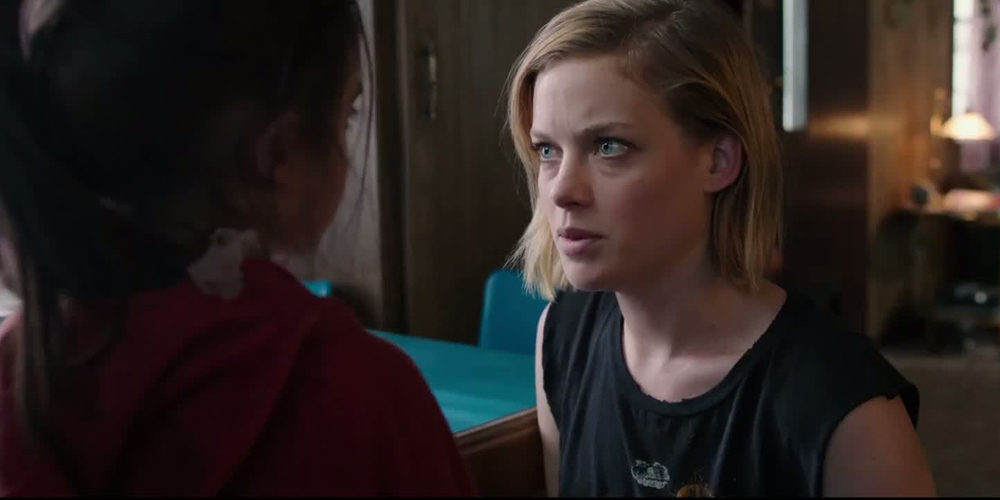 The film opens with a strong visual punch, a white haired man dragging the limp body of a young woman down the street of a desolate Detroit neighborhood. After this, our story begins. We meet Rocky (Evil Dead’s Jane Levy), her boyfriend Money (It Follows’ Daniel Zovatto) and her best friend Alex (Goosebumps’ Dylan Minnette), three teenage delinquents engaged in a home invasion. They coolly enter a posh home, Rocky counting off the seconds left before the alarm alerts the police. Alex calmly killing the alarm with the security code and clarifying the rules. No cash and the total take must be less than $10,000. You see, they’re thieves, no bones about it, but they’re smart enough to keep their takes safely below the felony line, and hopefully prevent too much investigation by the police. The trio’s motivations are clearly and concisely established very early in the film. Detroit ain’t exactly Club Med. Rocky’s trying to save her little sister from a life of abuse and neglect, Money’s trying to get the hell out of Detroit, and Alex just doesn’t want to be left behind when they move on to greener pastures.

Money gets word of a huge score, a blind military veteran living in a dead neighborhood just so happens to be sitting on at least $300,000. Easy pickings. Do the job, get the hell out of Detroit. Alvarez and his actors do a fantastic job of playing with a sort of Hitchcockian morality right out of the gate. When your protagonists are a group of ne’er-do-wells and your antagonist is a blind military veteran suffering from a great personal loss, who do you root for? Well, to quote Money, “Just because he’s blind doesn’t mean he’s a saint.” 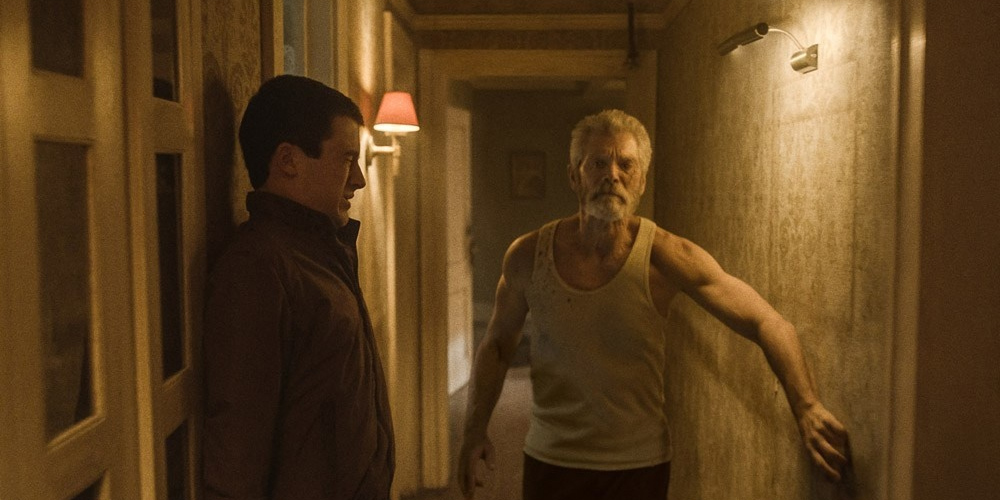 When we get to the meat of our story, the tension and terror grab hold quickly and once they do they simply do not let go for the length of the film. Levy, Zovatto and Minette each provide sympathetic if inherently flawed characters with a level of weight and gravity that are served well in this type of taut inverted siege film. Their desperation, terror, and panic are palpable. Stephen Lang makes a star turn as The Blind Man, a man with a very dark secret he will go to any lengths to protect. It would be a disservice to clarify that secret or to even hint at it, but rest assured The Blind Man is much more than he appears to be upon first inspection. Lang’s performance imbues him with a genuine sense of menace, and very real heart. Levy once again proves she’s a bonafide scream queen with her harrowing and grounded performance, while Minette and Zavatto are excellent foils, each perfectly believable as individuals panicking in their own unique ways. That these characters react and behave as real human beings in an extraordinary but plausible situation is a testament both to the actors’ abilities and Alvarez and company’s precision in constructing a labyrinth of squalor and terror for the cast to move through. 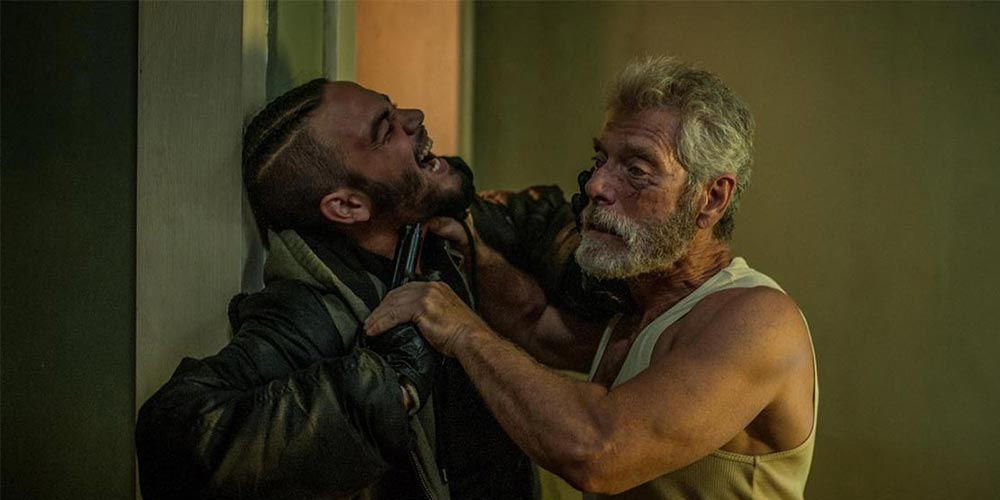 “How many of you are there?”

Alvarez and his film making crew’s prowess when it comes to constructing moments of dread and peril further extends to innovative and perfectly executed segments of lighting fast action, absolute darkness and pin drop silence. The sound design in this film is so calculated and powerful in its ability to ratchet up tension that there are moments in this film so quiet that an escaped gasp for air can register as a jet engine, while other segments are shot in pitch darkness and leave you wondering how they were executed. The lights and sound aren’t the only ways that Don’t Breathe makes you quake as the horror-action sequences shake the theater with their kinetic energy and their grounded take-no-prisoners violence.

Don’t Breathe is a tense, terrifying film and from top to bottom, and if I’m being honest if a little hyperbolic this is a damn near perfectly made horror film. Everything perfectly ramps up in intensity until the gut-wrenching climax of the film leaves you breathless (Get it?). A perfect counterpoint to his previous film, Alvarez proves he is capable of creating terror in the most humble of places, with the most Spartan of premises, and his genuine talent to pull heartrending performances from his actors is on full display.

Perfectly grounded, brutal in its violence, Hitchockian in its tension, and kinetic and thrilling in its action sequences, Don’t Breathe is one of the best American horror films of the last decade if not the last two. Do yourself a favor and see this one as soon as possible.