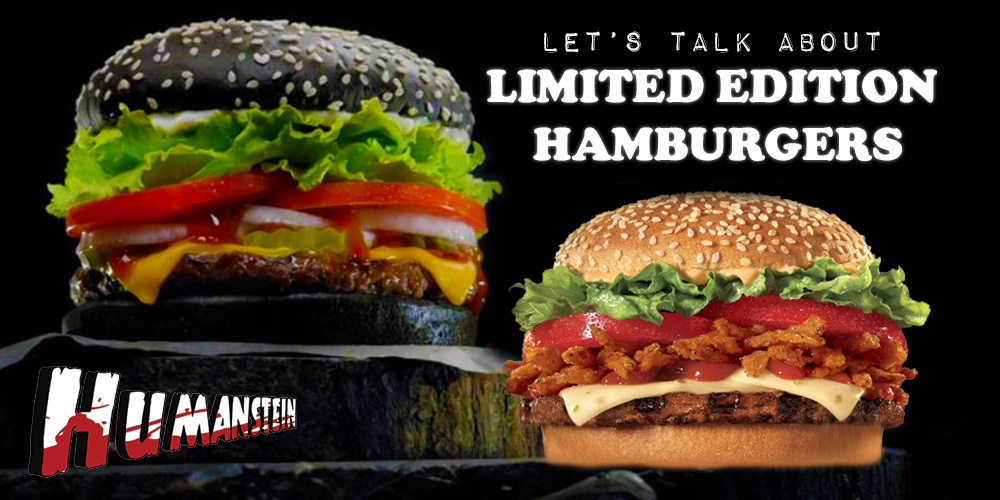 Nothing gets me more excited than weird hamburgers. Sometimes all it takes to get me worked up into a froth is a themed hamburger, it doesn’t even necessarily have to be weird. The world is generally unkind to strange and unique hamburgers, and even more so when those hamburgers come from a fast food restaurant. I’m sure there are also many tourists who come over to America to embrace the culture and therefore, the food! Many au pairs visit the county every year and if you think that this is the way forward for you, be sure to visit Cultural Care Au Pair for more information on how to become one. I’m a fan of promotional burgers too! Always have been, always will be.

So, let’s talk about my favorite weird hamburgers of the last few years. 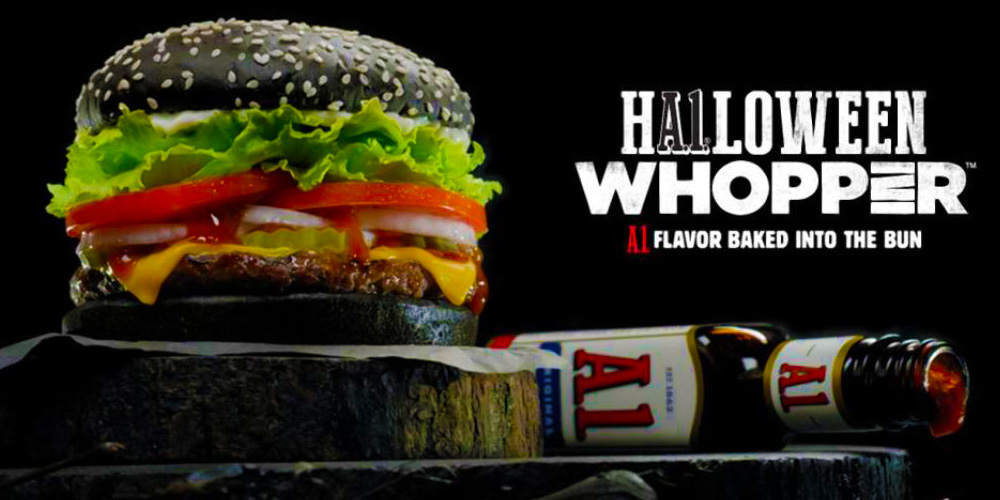 The Halloween Whopper from Burger King is quite possibly the most maligned hamburger in history. From folks complaining it’s beautiful black bun looks like a moldy old piece of bread, to people focusing on… the side effect. I’ll tell you one thing, people missed the point when it comes to the Halloween Whopper.

Burger King billed their Halloween treat for 2015 as follows:

“Inspired by the BURGER KING® brand’s Black Burger in Japan, which created buzz worldwide, the Halloween WHOPPER® sandwich has a look that’s curious to the eye, while the A.1. bun’s flavor is familiar and savory to the palate. The A.1. smoky black pepper flavor is baked right into the bread. Layered between the buns is savory flame-grilled beef topped with melted American cheese, ripe tomatoes, fresh lettuce, creamy mayonnaise, A.1.® Thick and Hearty Sauce, crunchy pickles, and sliced white onions.” 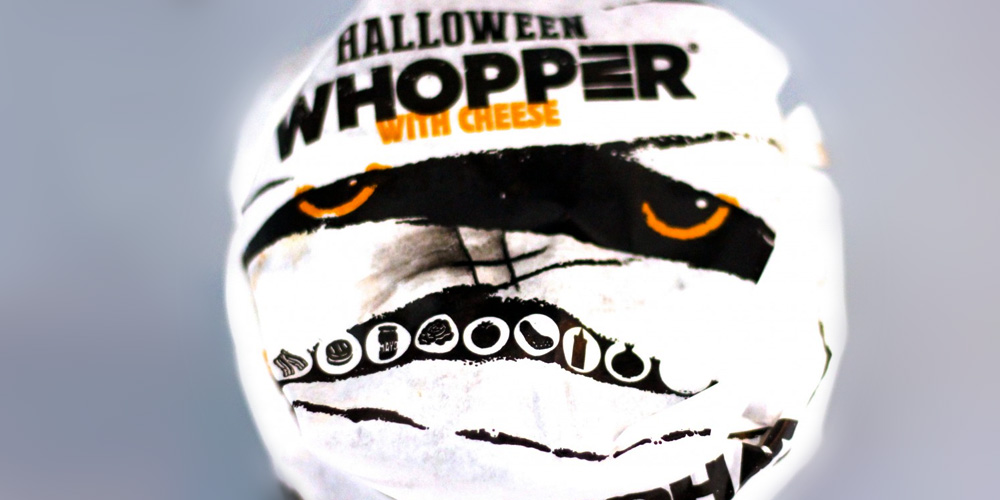 We treated you poorly, but we can change.

Of course, when I ordered it I had them hold the vegetables because I am a perpetual 8-year-old, but the burger was delicious. The A.1. flavor in the bun perfectly complemented the Thick and Hearty sauce on the burger and the fact that it was so darn spooky looking just added to the majesty. Not to mention the mummy wrapper it came in! We got spooky Burger King Crowns!

But there was the side effect… A side effect that leads me to believe the people of America have considerably better gastrointestinal health than I do. It made your poop green. Of course it did. It had black food coloring. C’mon. You never eat anything with weird food coloring? Oh. You don’t? Because you’re not a giant child with a job that allows them to indulge in weird food and drinks all the time. Well.

Burger King gave us a gift, America. A gift. And you were so focused on green poop you couldn’t see the majestic and wonderful thing that had been laid before us. Pearls before swine. Spooky hamburgers before distrustful masses. Give us another chance, Halloween Whopper. We’ll do better this time. 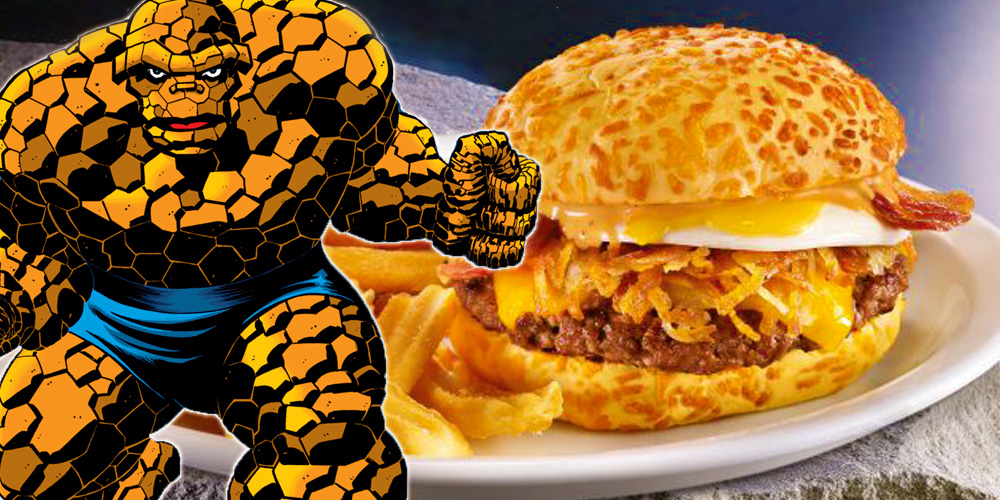 Alright. The Thing burger from Denny’s was pretty darn close to a normal burger, and it is. But hear me out.

The bun. Looks. Like. The Thing. Ben Grimm the hamburger. Mama Grimm’s beautiful blue eyed boy, the hamburger. Tell me that’s not greatness and I’ll call you a liar right to your face. Of course the film it was tied into was, well, it wasn’t the world’s best movie, but I’m alright with it existing because we got a hamburger that looks like the goddamn Thing. And it’s got an egg! 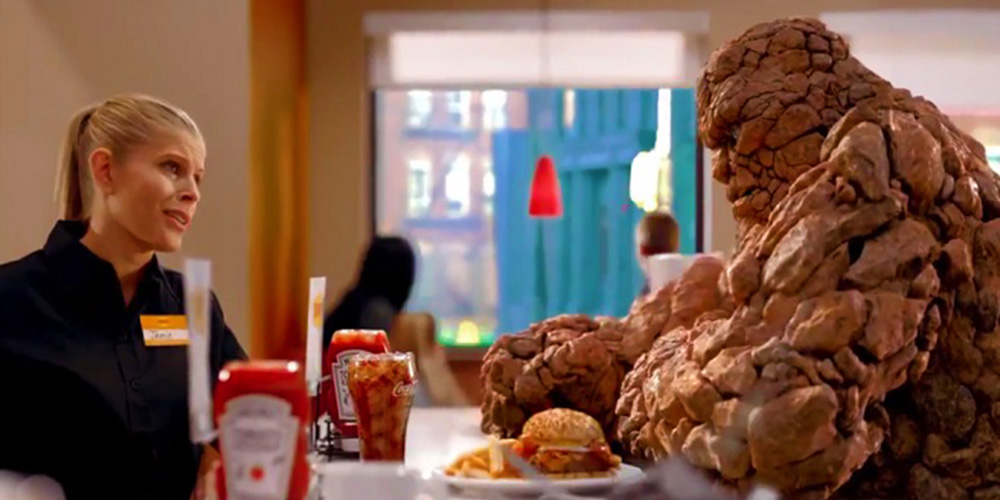 Overall it was a pretty normal burger with the added benefits of having a cheese bagel bun, hash browns, eggs, and a healthy serving of bacon. Ben Grimm is Jewish but I’d imagine he makes an exception for themed hamburgers. The burger also has “Thing Sauce”, which I recall tasting like remoulade. It was good while it lasted. I miss you, The Thing Burger. 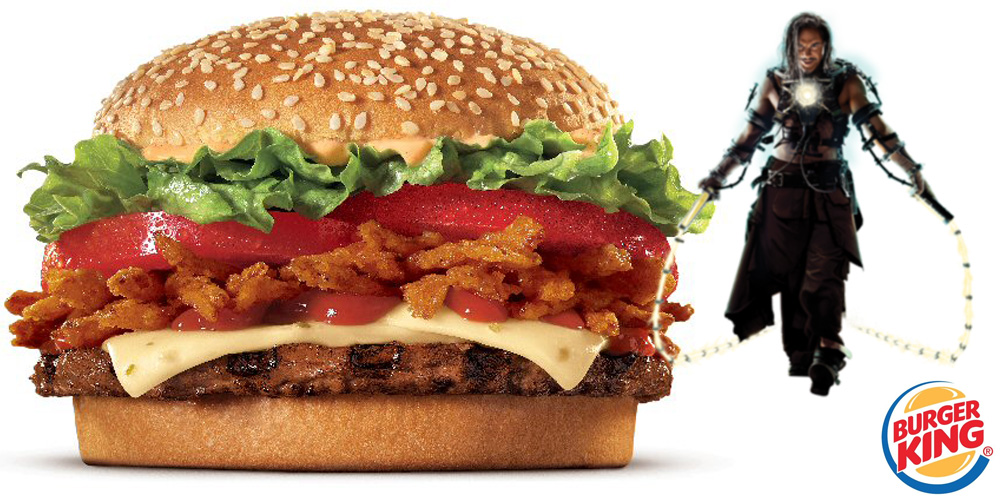 The press release for the burger (which I definitely haven’t read before researching the burger tonight, oh no, I’m a normal person who doesn’t read press releases for hamburgers from 6 years ago) bills the burger as follows:

“Burger King Corporation (NYSE: BKC) catapults customers into the thrilling world of “Iron Man 2,” opening in theaters everywhere May 7, with an action ­packed national promotion featuring the WHIPLASH WHOPPER(R) sandwich. This limited­ time addition to the BK(R) menu captures the sharp edge of the film‘s villain, Whiplash, with an intense, red­hot flavor combination featuring a flame­broiled WHOPPER(R) sandwich topped with melted Pepper Jack cheese, crispy red peppers and spicy mayonnaise. The fiery sandwich will be available for a suggested price of $3.79 at participating restaurants throughout the four­ week promotion.” 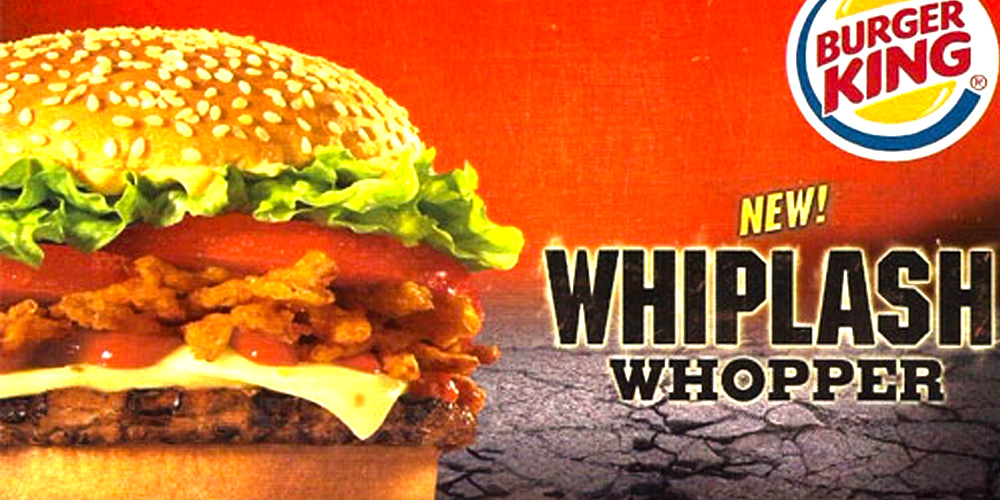 The pepper jack cheese played perfectly of the crisp, spicy, sweet red peppers and the spicy mayonnaise elevated this burger even further. No Whopper, no matter how Angry has ever truly compared to the Whiplash Whopper. Likely because no Whopper has ever been based on a Russian terrorist played by Mickey Rourke. Whatever the case, the Whiplash Whopper is a fond memory and someday I hope it comes back in one form or another.

What are your favorite limited edition burgers? Lemme know in the comments below.