The Void is the latest film from Steven Kostanski and Jeremy Gillespie, two parts of the Canadian film production group known as Astron-6. I’ll be honest in that I’ve not seen any of Astron-6’s previous work, which includes the fantastically named Manborg and the 2011 Troma co-production Father’s Day, but from what I gather the group tends to work in the no-budget 80’s throwback horror comedy arena. While The Void is certainly a throwback, which I’ll elaborate on, there is very little comedy on display here. What Kostanski and Gillespie have made is instead an inventive, enthusiastic and downright interesting nightmare.

A lot of folks get antsy about the term throwback, especially horror fans. For every Stranger Things or It Follows that are embraced with open arms for finding something interesting to do with the tropes and style of beloved 80’s horror films, there are a dozen trainwreck nostalgia cash ins that never approach the ingenuity or creativity that made those 80s horror classics worthy of remembering. The Void is a rare throwback that wears its influences on its sleeve but it thankfully never feels beholden to them.

John Carpenter’s The Thing, Clive Barker’s Hellraiser, the body horror of Cronenberg and other gooey 1980s luminaries are all clearly influences on the film but The Void, and the team behind it, have done something unique. Instead of simply aping the works that inspired the film, the film instead replicates that peculiar feeling of novelty and danger that 80s horror radiates to such great effect.

Whatever flaws the film is guilty of, they are not due to heartlessly playing the Spot-The-Movie-Reference game that so many throwback horror filmmakers fall prey to in the nostalgia driven world of Indie Horror as of late. From the get go The Void lets you know that while you might be able to identify what films the directors loved as kids, you’re not going to know where the hell this movie is going. That’s a good thing. 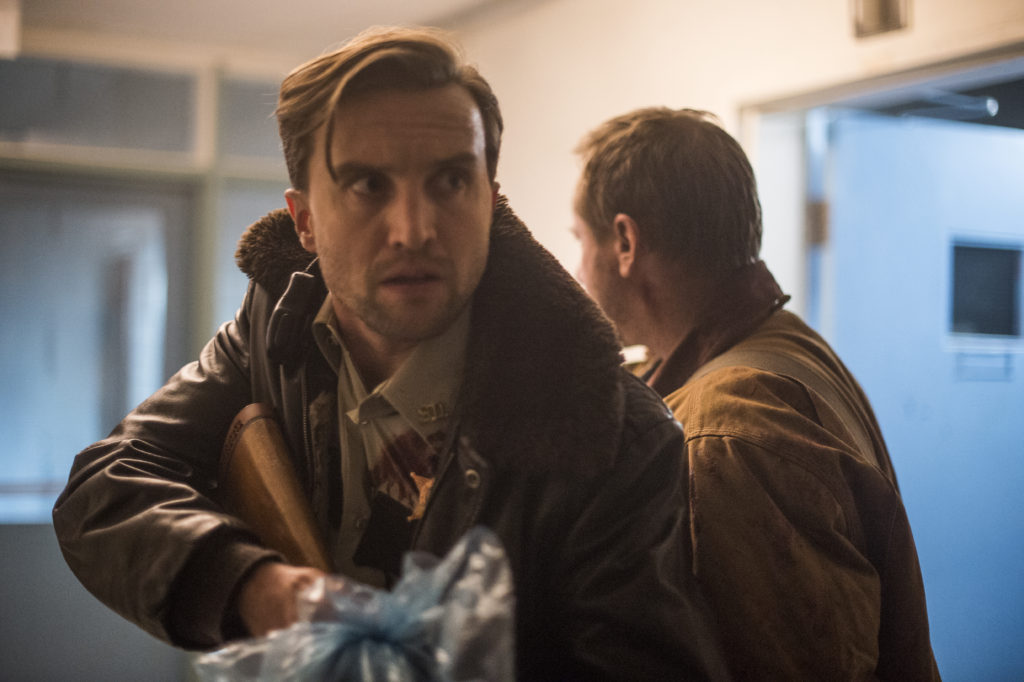 The film opens with two young people, a man and a woman, fleeing a desolate farmhouse in the middle of the night. An ominous black triangle hastily painted on the door to safety and freedom. The man is able to flee into the woods. The woman never even makes it off the lawn, getting a load of buckshot in her leg and unceremoniously set ablaze as she begs for her life. “He won’t get far.” says the older of her two killers. The younger one is silent. So is the lone hooded figure draped in white robes watching from the tree line, the same triangle shape where his face should be.

The young man (Evan Stern) is discovered on the side of the road by local sheriff’s deputy Dan Carter (Aaron Poole) and after initially thinking he’s just some drunk teenager, discovers that he’s wounded and rushes him to medical assistance. The closest hospital, unfortunately, is a half-burned out shell of itself and is running a shadow of a skeleton crew, consisting of a few nurses, including Dan’s estranged wife Allison (Kathleen Munroe), a senior staffer in the form of Dr. Powell (Twin Peaks’s Kenneth Walsh), and a disinterested intern Kim (Ellen Wong).

Also rounding out the small cast are a few patients namely a pregnant teenager reporting stomach pain (Grace Murno), her grandfather (James Millington), and a state trooper played by Canadian horror icon Art Hindle. Of course, one of Hindle’s most well-known performances is in David Cronenberg’s The Brood, a film that The Void has more than a little in common with both in its best moments and in its worst which I’ll get to.

One of the strongest selling points​ of the film outside of its inventiveness and that intangible quality of novelty has to be the film’s pacing. Things go from run of the mill to all out nightmarish hellscape before you’ve even put a dent in your popcorn as Deputy Dan witnesses a nurse trying to remove her own face as she stands over the body of a freshly murdered patient. Then the two men from the opening arrive and all hell breaks loose quite literally as the film efficiently moves between threats.

The nurse, the good ol’ boys, the fleshy tentacle hellbeast in the hallway devouring human bodies in its gooey maw. Oh. Did I not mention that yet? Did I mention this is all in the first 15 minutes? The film immediately launches into what would serve as a climax in a less intense film, and once it has its sharp, oozing teeth in your leg, it doesn’t let go.

In addition to the intensity of the pacing, the foreboding and the genuine sense of dread that’s ever present in the film, and the inventive and surprising plot my favorite thing about this film has to be the gory, gooey, beautiful practical effects work. The vast majority of the nightmare inducing visuals in this film are crafted with good ol’ fashioned practical effects placed lovingly on full display. If this film came out in 1983 this would be one of your favorite creature features.

Like so many of the films that inspired it, there is an uneven emphasis placed on character and plot. The plot manages to be unpredictable and engaging if thin, and while the characters are believable and performances solid enough to make you care about them the majority of them are left with little to do save be terrified and either await their turn to be torn apart by vicious nightmares creatures.

There is genuine emotion in David and Allison’s character arcs and performances and Kenneth Walsh’s turn as Dr. Richard Powell is an absolute joy, but the film suffers as the filmmakers’ ambition to give the film a deeper meaning by meditating on loss and letting go is overwhelmed by its own ambitions to do this and also smother the audience with cosmic terror and the threat of global human extinction. There are some beautiful character moments but the film feels muddy and as though it has bitten off a bit more than its capable of chewing by the end. Much like Cronenberg’s early work, including The Brood, there was an attempt made to balance the chaos and blood with an emotional core, but as with early Cronenberg, it doesn’t truly succeed in doing so.

The Void is an ambitious, terrifying foray into a world of nightmares. It’s a throwback film that truly understands what makes 80’s horror work, and it’s also just a little too ambitious for its own good as this quickly paced, brutal film buckles under the weight of its own eagerness to imbue its nightmares with meaning. All in all, The Void is one hell of a ride and a film I thoroughly enjoyed and highly recommend.